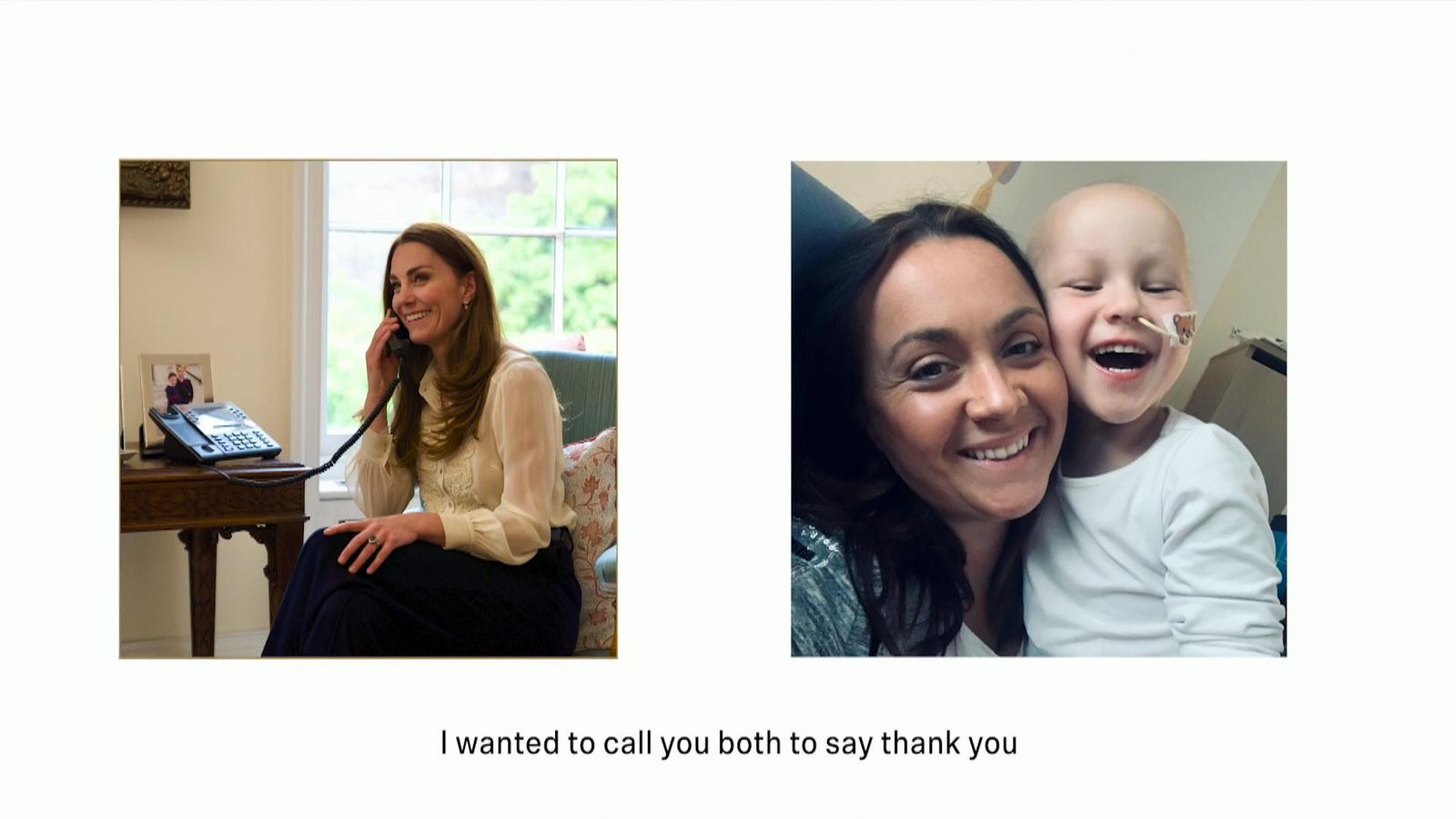 The Duchess of Cambridge has promised to wear a pink dress when she finally meets the brave youngster who had to be separated from her father during lockdown.

Mila Sneddon, then four years old, became a symbol of the importance of isolation during the pandemic after she was pictured for Kate’s lockdown photography project Hold Still.

The moving image showed the youngster kissing the kitchen window as her father Scott stood outside.

Mila, who is undergoing chemotherapy for leukaemia, was separated from her father in the first lockdown for seven weeks, after he had to go to work and could not risk bringing coronavirus into the family home in Falkirk.

As Kate chatted on the phone with the young girl, talk turned to Mila’s favourite subject – princesses.

And when quizzed about her outfit, the duchess admitted she was “not wearing a princess costume right now” but pledged to wear Mila’s favourite colour when they eventually met in person.

Image: The moving image showed Mila kissing the kitchen window as her father Scott stood outside. Pic: The Duke and Duchess of Cambridge, YouTube

In a conversation posted on the Cambridges’ new YouTube channel on Thursday, Mila asked Kate: “Do you have a costume?”

The duchess replied: “I’m not wearing a princess costume right now, I’m afraid Mila. Do you have lots of dressing-up outfits yourself?”

Mila said: “Yeah” and told the duchess her favourite colour was pink.

Kate added: “OK, well I have to make sure I go and try and find myself a pink dress so that hopefully, when one day hopefully, Mila we’ll get to meet, and then I’ll remember to wear my pink dress for you.

Image: Mila is four months into her chemotherapy journey for acute lymphoblastic leukaemia. Pic: The Duke and Duchess of Cambridge, YouTube

“Would that be nice?”

The image of Mila and her father, taken by her mother Lynda, was entitled Shielding Mila, and was one of 100 pictures selected for the Hold Still photography initiative, launched by Kate and the National Portrait Gallery in 2020.

People of all ages across the UK were invited to submit a photo which they had taken during lockdown, focusing on three themes – helpers and heroes, your new normal and acts of kindness.

The call, recorded last autumn, was released to mark the publication of Kate’s new Hold Still photography book on Friday.

To which Kate replied: “Good morning. Goodness me, you’re so polite Mila.”

Kate asked Mila about being apart from her father: “Was it really hard not seeing him?”

She said it was and told of the poignant moment they were reunited, saying: “When he came into the house I was like, so surprised.”

The duchess told Mila: “It’s a very small age to have a big operation. You were a very strong girl, weren’t you?”

And Mila proudly told Kate: “I know all your kids’ names.”

The duchess asked her if she could remember them, with the youngster listing Charlotte, then George and finally Louis.

Image: Mila was proud to tell the duchess she knew all her children’s names

The duchess told her how Louis, who has just turned three, has been charging around on his scooter.

“Louis has got so big now. He’s very quick running around and he’s on his little scooter as well.

The duchess also spoke to Mila’s mother Lynda, describing how she and the rest of the judging panel felt that the image was “such a powerful one”.

“It tells the story of this particular time and a very personal story to you, so thank you very for much for sharing it,” Kate said.

Mila is now five and currently in hospital, which Mrs Sneddon described to ITV as a “wee bump in the road”.

The youngster was also separated from her older sister Jodi during the first lockdown.

“It must have been so challenging for all of you during lockdown, being separated,” the duchess said to Mrs Sneddon.

Mrs Sneddon said lockdown had had the surprise benefit of allowing them a period of time to focus on Mila’s treatment without interruptions.

She said: “Scott and I are so proud of Mila and Jodi, my eldest, through this time and the challenges they have had to overcome.”

The Railway Children sequel announced after more than 50 years