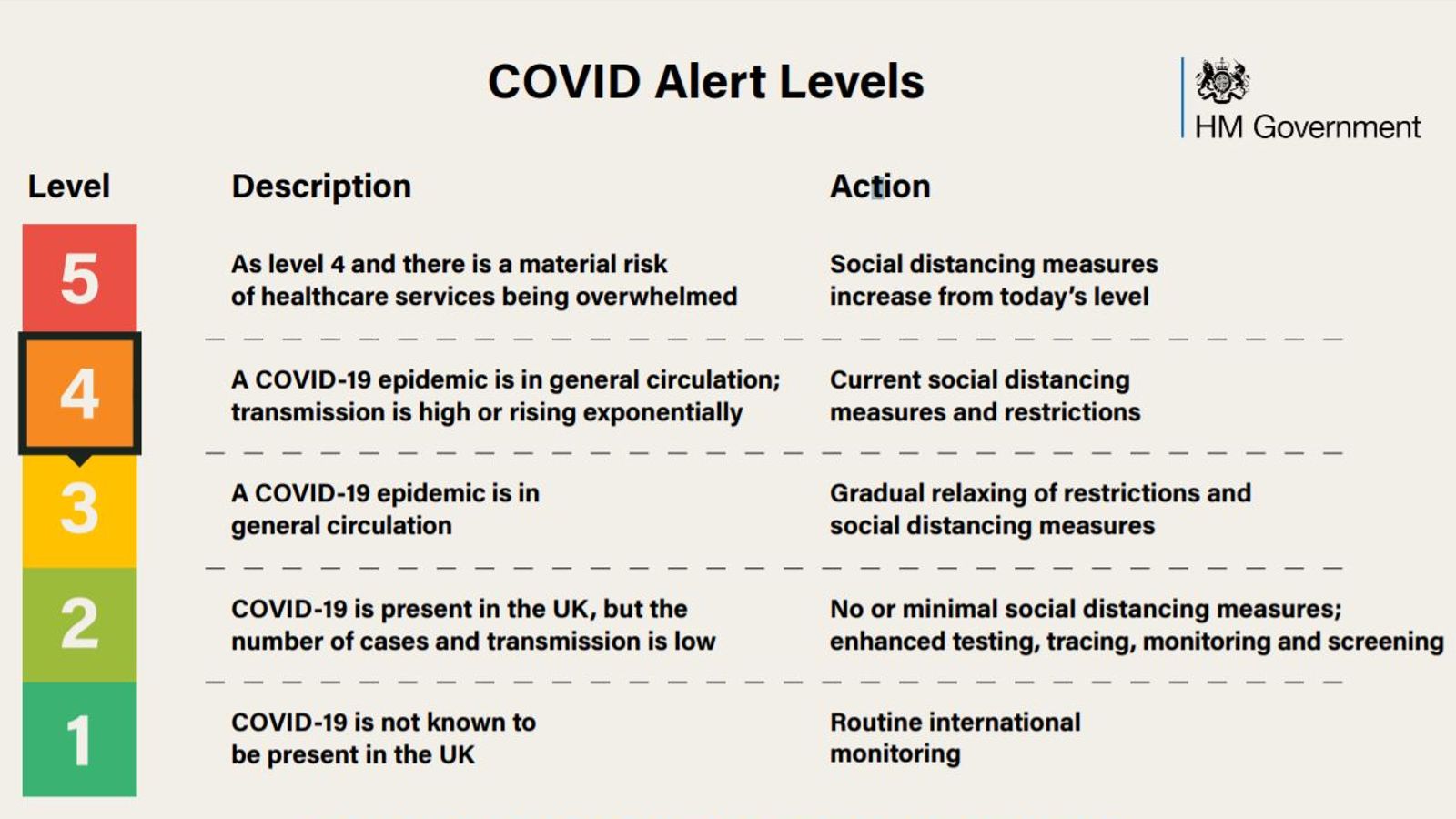 The UK’s COVID-19 alert level should be lowered from four to three, chief medical officers have said.

A statement from the medical officers and NHS England’s national medical director said that people must remain “vigilant” of the virus, but added the decision to downgrade the alert level was “thanks to the efforts of the UK public”.

They said: “Following advice from the Joint Biosecurity Centre and in the light of the most recent data, the UK Chief Medical Officers and NHS England National Medical Director agree that the UK alert level should move from level 4 to level 3.

“Thanks to the efforts of the UK public in social distancing and the impact we are starting to see from the vaccination programme, case numbers, deaths and COVID hospital pressures have fallen consistently.

“However COVID is still circulating with people catching and spreading the virus every day so we all need to continue to be vigilant. This remains a major pandemic globally.

Image: More restrictions are due to be lifted on 17 May

“It is very important that we all continue to follow the guidance closely and everyone gets both doses of the vaccine when they are offered it.”

The downgrade comes after a “consistent” fall in cases, hospital admissions and deaths.

Here is what each alert level means:

Level 5 – The highest on the scale, this indicates there is a “material risk” of the NHS being overwhelmed.

Level 4 – This means the COVID-19 epidemic “is in general circulation” and that “transmission is high or rising exponentially”.

Level 3 – While this level also suggests the epidemic is “in general circulation”, it omits the statement “transmission is high or rising exponentially”.

It would mean a gradual reduction in social distancing measures and restrictions.

Level 2 – To shift to this level, the government guidance says the virus would be present in the UK, but that the number of cases and transmission is low.

It says this would then allow “no or minimal social distancing measures”, but with enhanced “testing, tracing, monitoring and screening”.

This level has not been reached since the system was introduced.

Level 1 – The level which the government eventually hopes to reach, this would indicate “COVID-19 is not known to be present in the UK”.

The COVID threat level in the UK has not been below level three since the start of the pandemic. It was last at three in the middle of September last year.

On 4 January, it was raised to the highest level of five when officials raised concerns that the NHS was at risk of being “overwhelmed”. It was downgraded to level four in February.

It is expected that Prime Minister Boris Johnson will later today confirm England can move ahead with the next phase of lockdown easing from 17 May, including households mixing indoors and the return of indoor hospitality.

The latest data suggests easing restrictions is unlikely to risk a resurgence in infections, the government has said.

Sir John Bell, regius professor of medicine at Oxford University, said the nation was in a “very strong position” to continue easing restrictions and enable people to “try and get back to normal”.

He told ITV’s Good Morning Britain: “I do think that we’re in a very strong position to go forward now with fewer restrictions and try to get back to normal.”

More than a third of UK adults are now fully vaccinated against COVID-19 – with approaching 18 million people having received both jabs – 33.5% of people aged 18 and over.

Overall, more than 53 million vaccine doses have been administered in the UK.