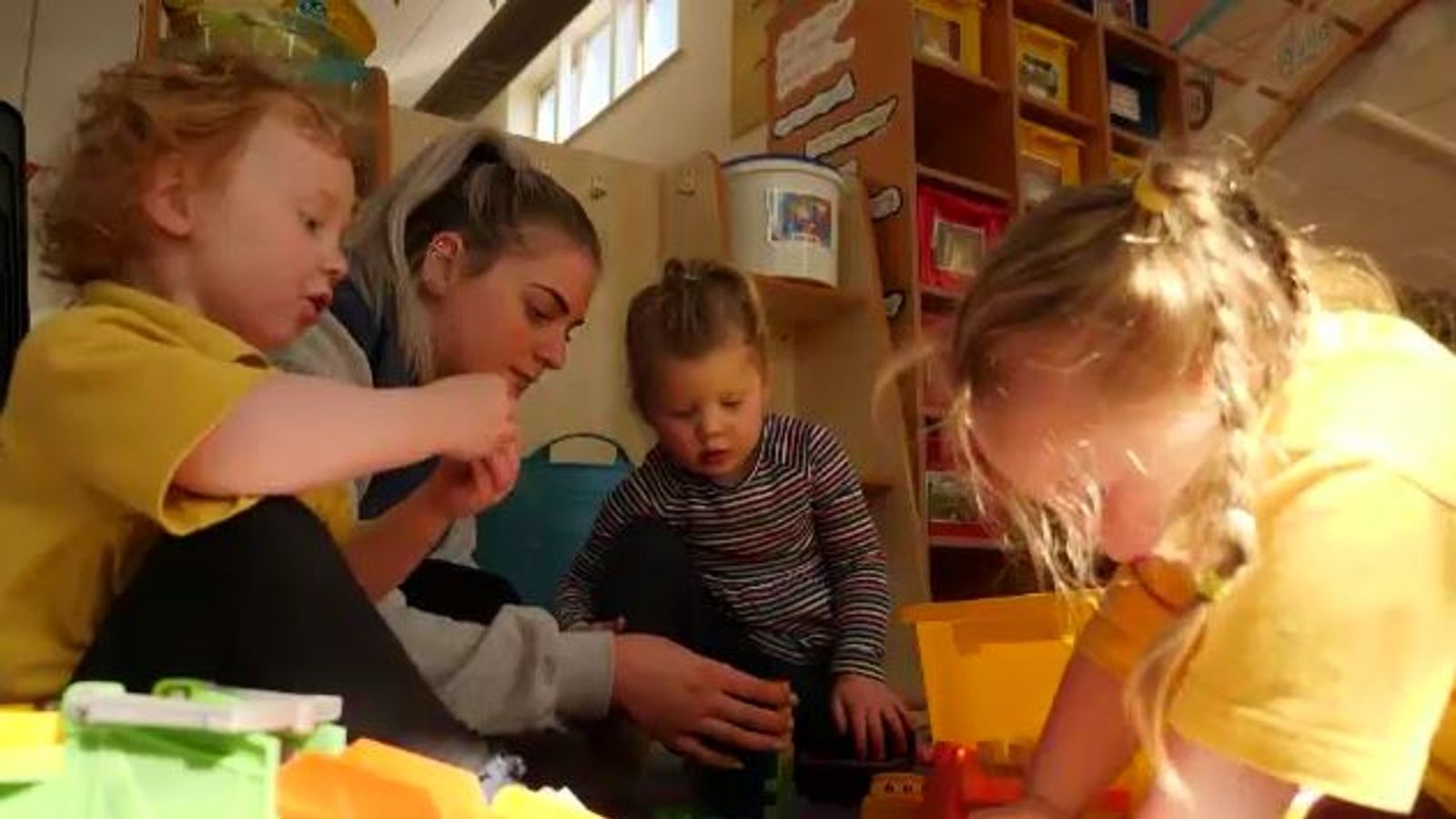 The attainment gap between disadvantaged children and their more affluent peers has widened since the start of the pandemic, according to nearly half of those who work with pre-schoolers.

One in six said fewer children are at the expected level of learning and development compared with March 2020.

In an exclusive survey for Sky News, The Early Years Alliance, which represents and advocates for pre-school settings, asked its members about the changes they had seen in children over the past year.

Even before they start school, there is already an attainment gap between the most economically disadvantaged children and their peers.

In 2019, 71% of children starting school were at the expected learning level, but for those on free school meals it was 55%.

With no data on the impact of the pandemic, the only way to assess the current situation is to hear the experiences of early years professionals.

More than 1,300 education professionals working in nurseries, pre-schools and childminding settings responded to the survey.

Image: Some children were able to thrive during lockdown but others regressed

Some 75% reported seeing changes in the development of children who did not attend during the first lockdown.

Also, 49% said the attainment gap between poorer children and their peers has widened, with 11% saying the widening was “significant”.

Many parents said they had noticed big changes in their children, having socialised much less during the pandemic.

“It was probably the lowest point I’ve ever been as a parent,” said Philomena O’Rawe, whose daughter Elsie-Mai is due to start school in September.

“Nothing was as hard as the first lockdown.”

Ms O’Rawe is a single parent and her older son has special needs.

When the pandemic hit, his special school closed and she was left struggling to cope.

Image: There is an attainment gap between disadvantaged children and their peers before they start school

Elsie-Mai eventually qualified for extra nursery time and, while Ms O’Rawe said this had kept the family together, that time still took a deep toll.

“She has definitely regressed, milestones that she was hitting, toileting, things like that, you know, she has massively regressed to the point where I’ve had to have the health visitor involved now.”

Ms O’Rawe also said the impact would stay with her daughter for the rest of her life.

Nursery workers are also worried about children who did not return after lockdown, or who are not in nursery at all.

Some 59% said there were fewer children at their setting compared with the number seen pre-pandemic, while 57% observed a lower number of children joining.

Image: Becca Thompson says some children are not where they need to be ahead of moving on to school

At Teddy Bear Corner nursery in Warwickshire, not all children returned but there were stark differences in those who did.

Becca Thompson, who works at the nursery, said: “Some of them came back and had thrived in lockdown, but then other children had kind of gone the other way.”

Children had regressed in things such as potty training, language and communication and emotional development.

“The children who haven’t necessarily had that support from us this year, because of COVID, they’re not necessarily ready, emotionally and socially, to go into school,” Ms Thompson said.

“The ones that are going to school in September, if they’re the ones that have got, you know, difficulties, we don’t have long now to put those things, the provisions in place that we normally would.”

There is a wide variety of children at Teddy Bear Corner from a wide mix of homes. Levelling the playing field has always been paramount.

Sue Blundell, who owns the nursery and has run it for 25 years, said she had never seen anything have such a broad impact on children.

“I think that lockdown did have a profound effect on them,” she said.

“Inequalities have always been there, but I think it’s going to get worse, to the detriment of all the children we look after.

“This generation could well be a partially lost generation.”

The difference in outcomes is likely to be down to a complex mix of factors: cramped living conditions, or parents working multiple jobs that can’t be done from home.

Image: Cathy Hawkes said the past year had been ‘really hard’

Experts are also keen to emphasise that the last year has taken its toll on different families for different reasons.

But many want to see government intervention: 82% of survey respondents said they felt the government was not doing enough to tackle the pandemic’s impact on learning and development for those aged under five.

Neil Leitch, chief executive of Early Years Alliance, said: “We would never give up hope, but it does need an intervention, it does need some action.”

He described the early years sector as “neglected, and marginalised” – adding that pre-school children did not get the support and resources at home during lockdown that could have helped.

“I would certainly turn the recovery programme on its head and reinvest in the early years,” he said.

“I do think that we should adequately fund the early years sector.

“It has been systematically underfunded for decades, and that, I would suggest, is because we are not treated as educators, we are seen as glorified babysitters.

“It isn’t just about keeping them safe. It’s about educating them.”

Meanwhile parents from all backgrounds are left trying to help their children catch up, even when the resources they might have previously relied on are still restricted.

Cathy Hawkes used to take her daughter Eliza to the local child centre near her home in Southend numerous times a week.

She said it was a vital source of support but since the pandemic it has been used mainly as a medical hub, meaning she has only been a handful of times all year.

“I know that kids are easy to adjust to things but it must have had some kind of effects, the fact that all of a sudden your whole life has completely changed,” she said.

“It always feels like you’re not doing enough as a parent, because they’re not doing what they’re supposed to be doing or what you want them to be able to do.

Jordan Banks: Boy who died after being ‘struck by lightning’ was organ donor and will save three lives, dad reveals