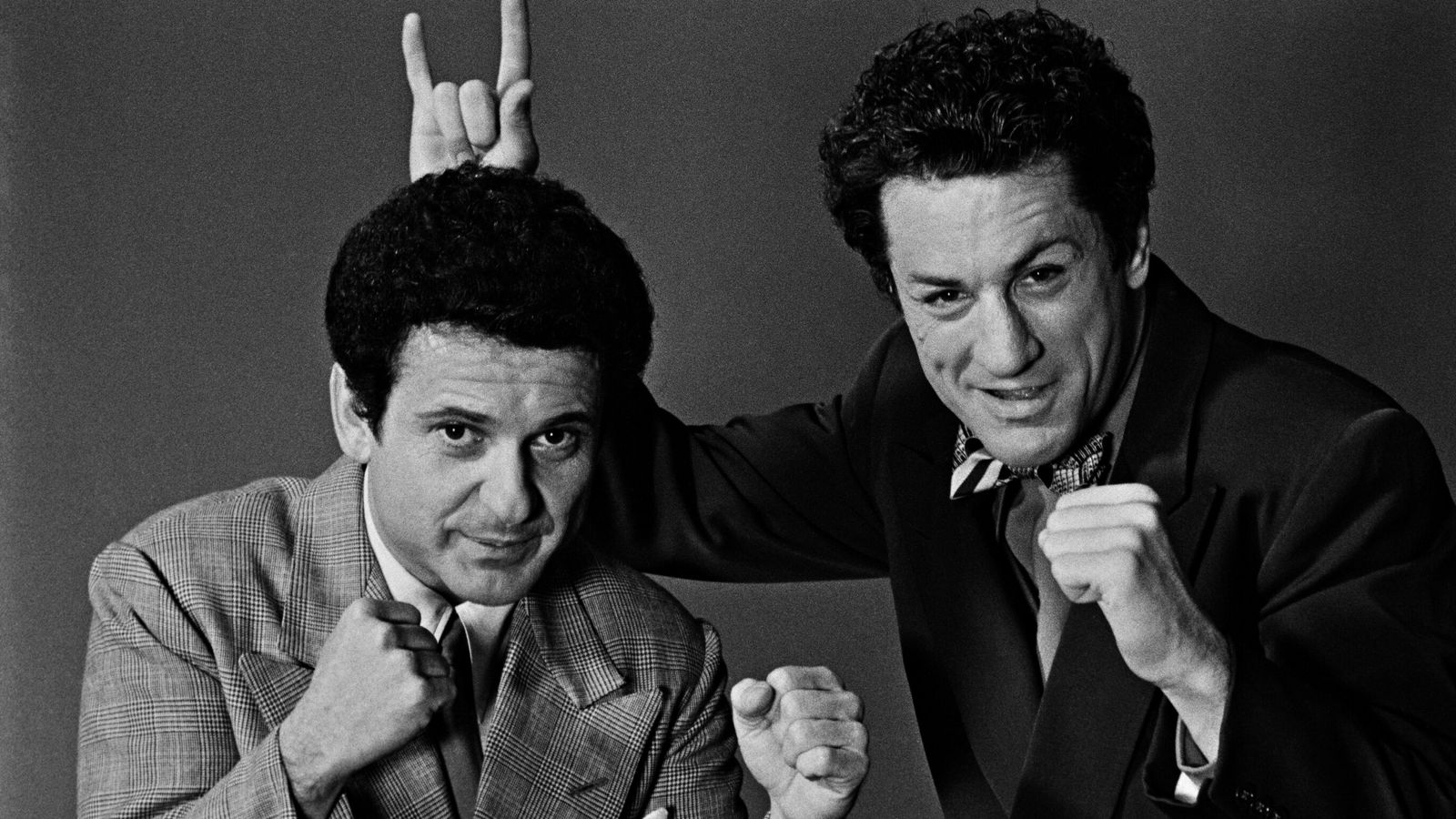 Raging Bull, the dark and unrelenting story of violent boxer Jake LaMotta, is widely considered among the greatest films ever made, and certainly one of actor Robert De Niro and director Martin Scorsese’s finest works. For the past year, British writer Jay Glennie has been working with De Niro and Scorsese to tell the story of how the film was made.

When you’re chatting to Robert De Niro, you’re told to call him Bob. For Jay Glennie, a writer from Essex who had first tried his luck emailing representatives for the star towards the end of 2016, it initially felt strange. This was the Robert De Niro, a childhood hero, one of the most revered actors in the world. But his father is Mr Robert De Niro, the star says. So Bob it was.

That first conversation sparked the beginning of a friendship which has led to Glennie’s latest work, Raging Bull: The Making Of, featuring not just De Niro sharing his memories and photos, but director Martin Scorsese and other stars and crew members, too – including the rarely interviewed Joe Pesci.

It is the result of dozens of Zoom conversations throughout lockdown, meticulously going through detail after detail, and a dig into the De Niro and Scorsese archives. “Like all of us, there was that initial worry back in March [2020],” says Glennie. “Raging Bull kept me sane, which is a bizarre thing to say because it’s the most unfriendly, harsh watch you could imagine. But it did, it kept me sane, writing the book.”

Raging Bull is the second book Glennie has worked on with De Niro; the first was One Shot: The Making of The Deer Hunter, published in January 2020. The story starts back in November 2016 when Glennie first sent that out-of-the-blue email to the actor’s representatives. “Sure enough, they came back and said, ‘I think Bob would be up for this’.”

So by the time it came to writing about Raging Bull, Glennie didn’t need to go through representatives. He emailed De Niro directly. And so together, they brought the story of the making of Raging Bull to print.

The film, released in 1980, is an autobiographical drama adapted from the memoir Raging Bull: My Story by middleweight boxer Jake LaMotta, published 10 years earlier. Nominated for eight Oscars, De Niro took home the statuette for best actor for his portrayal of LaMotta, a self-destructive fighter consumed by rage, violence and jealousy.

For Scorsese, who was reluctant and took years of persuading to take on the project, it became known as one of his masterpieces; you would be hard-pressed to find any respectable list of the greatest films ever made on which it does not feature.

“We’re still looking at Robert De Niro’s performance in Raging Bull as one of the greatest ever committed to celluloid,” says Glennie. “It’s unchecked masculinity mixed with complete insecurity and anger. I’ve never seen anything like it.”

Image: De Niro and Scorsese travelled to the Caribbean to work on the script. Pic: Gloria Norris/ Coattail Publications

The writer delved deep into everything, from why De Niro wanted to take on the character, to convincing Scorsese, to his training and then weight gain to capture LaMotta’s later years.

“He said he had to find out how it felt to have your legs chapped because they’re rubbing against one another, what it felt like to be out of breath, your hands putting on weight as well, not being able to pick up your children. He had to find that out to get into the character.”

As 2020 went on, Glennie spoke to Scorsese and others involved in the film, hearing stories from behind the scenes and how Scorsese and De Niro flew out to Sint Maarten, in the Caribbean, to work on screenwriter Paul Schrader’s screenplay. The pictures of De Niro and Scorsese grinning and sipping cocktails, dressed in Hawaiian shirts, are a million miles away from the dark story they were about to commit to screen.

“The plan was to go to the Caribbean for three or four weeks and really stamp their authority on it,” says Glennie. “They wanted to take somebody with them to put all their scraps of paper and all their work down into a screenplay and the lady they took with them was Gloria Norris. It took me ages to find her but when I finally [did] she kept saying, ‘oh I remember on that last day on the beach, we took photographs, it brings back so many memories’.

“That that to me is one of the great joys of telling these stories, when you unearth somebody who perhaps hasn’t had the opportunity to tell their story before… It’s like being a historian on an archaeological dig.”

And then there were the chats with Scorsese, too. While De Niro’s Zoom background gave nothing away, “just a door and a window”, Scorsese’s was “festooned” with movie memorabilia, a poster of the 1952 Kirk Douglas film, The Bad And The Beautiful, about an unscrupulous movie producer, behind him. His favourite film, he told Glennie.

“He’s a film nut just like me. Chatting to Martin Scorsese is like going to film school. He’d be there and then all of a sudden he’d be gone from the screen. ‘Jay, Jay, Jay, I’ve got this…’ and he’s come back, ‘look at this’, and then he’d be telling me a story about it…

“Then you get another email: ‘Jay, I’ve had some more thoughts, can we have another chat tonight?’ It literally is film heaven.”

One Monday morning, as the book was almost finished, Glennie got an unexpected email from De Niro: Jay, I need to speak to you ASAP, are you free now? “When you get a message like that, you think, ‘oh my God, this doesn’t bode well’.”

But it was good news. Glennie had received three polite nos from representatives for Pesci, who played Joey LaMotta, Jake’s brother and one-time manager in the film, and was relying on an old interview to help get the actor’s voice into the story. But De Niro had persuaded him.

“But Bob had spoken to Joe on the Sunday evening and he was on board… He said, ‘he’s a tough cookie, but I know you can handle him’. And we did, we got on really well. The first couple of questions to Mr Pesci were batted back almost… but before we knew it, what was going to be a quick five, 10 minute phone call was nearly an hour. And his PA rung me back and said how much he enjoyed it.”

How do you sign a book to Robert De Niro?

Before the book went to print, De Niro wanted to go over it, spending several hours combing through every page with Glennie over Zoom.

There were a few bits that were a bit too “British” for the Manhattan-born actor’s liking. “‘Jay, I would never have said it like that, that’s a little bit of you in there’, Glennie recalls. “So we had to take a few of my Essex-isms out to make it more New York, which is wonderful.” Such as? “Words like ‘delighted’ and ‘fantastic’. He said, ‘Jay, I would never describe anything as I was delighted with’, and as he said it did sound so stupid coming out of his mouth.”

The first editions of the book were printed in March, a year after Glennie started working on it. He has his copy, and De Niro, Scorsese and all the other contributors have just had theirs sent out. Has Glennie signed it? Yes, but doesn’t go into details. He thanked him, he says. “What do you write to Robert De Niro? ‘Keep up the good work’?”

Image: Glennie first met De Niro to tell the story of The Deer Hunter, and now a third book on Taxi Driver is in the works

With The Deer Hunter book, after their initial conversations, Glennie got to meet De Niro in person, and also flew out to the US to see his archive, stored at the Harry Ransom Center at the University of Texas at Austin. “He’s kept everything,” says Glennie. “You’ve got Deer Hunter, you’ve got Raging Bull, Taxi Driver, and you request it and they bring it out, you’ve got white gloves on and you sort through absolute film heaven.”

Nothing has been in person for Raging Bull but with pandemic restrictions slowly lifting, Glennie hopes to see the star with his own personal copy soon. “I don’t know if Essex is on the cards but certainly he’s got restaurants in London,” he says.

And now his third collaboration with De Niro, on the 1976, Scorsese-directed film Taxi Driver, is in the works. That first tentative email sent out in 2016 has been “life-changing”, Glennie says. “Bob knows that as well, I’ve told him… he has changed my life. I’m a fan who’s now a friend.”

Jay Glennie’s Raging Bull: The Making Of, published by Coattail Publications, is out now