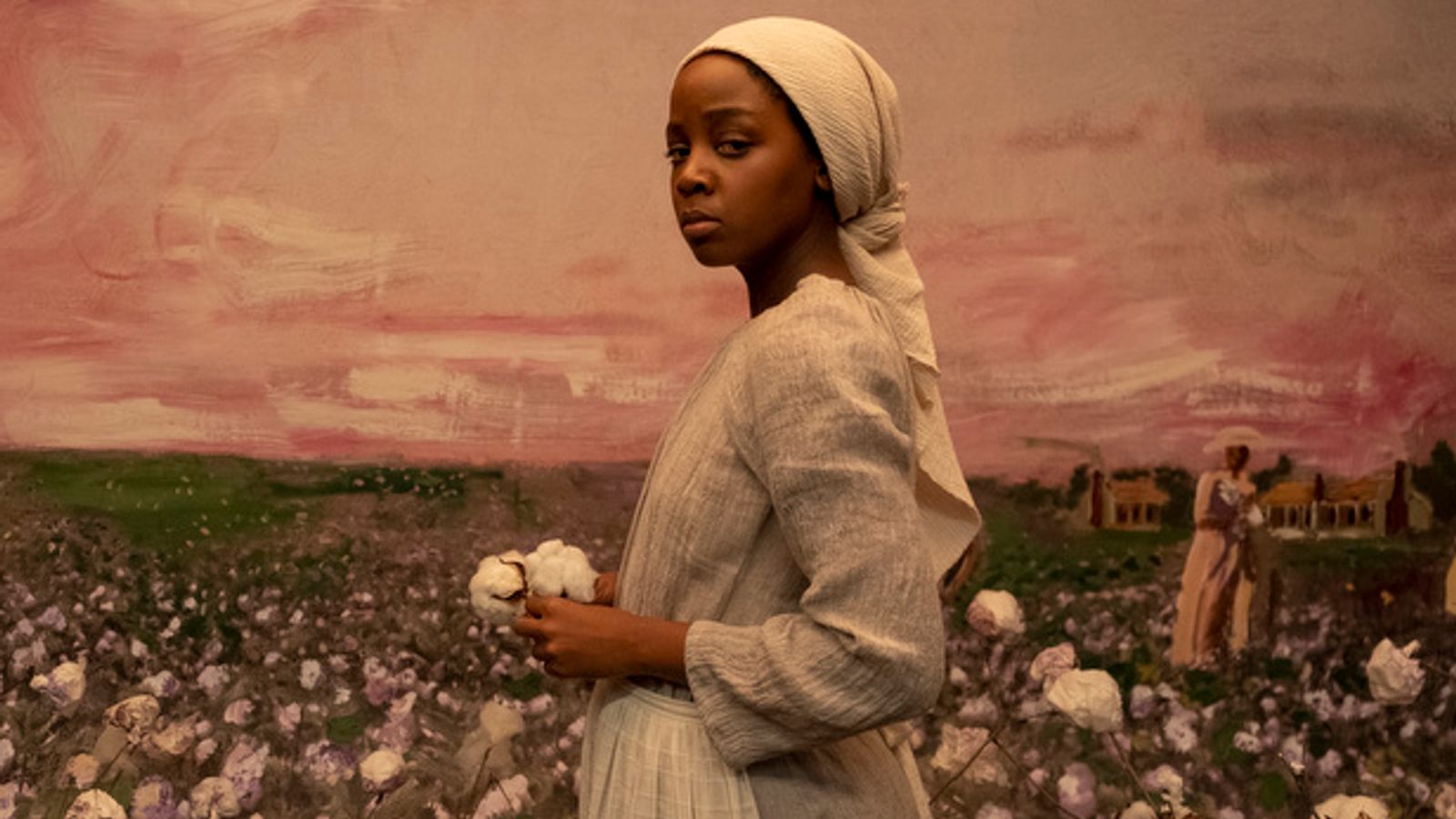 Barry Jenkins’ new limited series The Underground Railroad has been a long time coming for the Oscar-winning filmmaker, who says he has always wanted to make something related to the “American condition of slavery”.

The show is adapted from the Pulitzer Prize winning novel by Colson Whitehead, which re-imagines the underground railroad – a network of secret routes and safe houses established in the US to help slaves escape during the early to mid-19th century – as a real train line.

The 10-part series, about a young slave girl who escapes a plantation and makes her way across America, exposes the horrors faced by black people in the 1800s, but is also beautiful and compelling to watch.

Image: Director Jenkins, pictured on set, says the series made him think about his own ancestors

Jenkins told Sky News’ Backstage podcast that making the programme brought him closer to his own ancestors.

“And I think in creating the show with all these wonderful actors who literally gave body and voice to my ancestors, I think to me the show did that where I look at them, that I’m so proud to be the descendant of blacksmiths and midwives and herbalists and spiritualists.

“It took a process of getting there with this creation, but now, if there is an image of one of my ancestors, I see nothing but honour and dignity and respect.”

Jenkins, whose previous work includes the Oscar-winning Moonlight and If Beale Street Could Talk, admits he was surprised by how he felt once The Underground Railroad was complete.

“I expected to come out of it and have this anger and be like, I just want to step on the face of everybody who owned slaves or who contributed to the condition of American slavery,” he said. “But instead I came up with something completely different.

“I just want to hug all my ancestors. I think of them and they were just so beautiful and so powerful and so strong, and that’s the feeling that came out of the process of making this work, and I’m so glad I did.”

Image: South African actress Mbedu says being in the show has been ‘healing’

South African actress Thuso Mbedu, who plays the lead character Cora Randall, told Backstage that being on the show has taught her a lot.

“Telling the story did heal parts of me that I didn’t know were wounded,” she said. “[It] gave voice to so many things that I did not know or did not have the vocab to articulate, and that goes a very long way and it expands over numerous different things.

“But more than anything, it’s the healing and it’s something that I’m hoping that the viewers will experience as well.”

Joel Edgerton, known for films including Boy Erased, Zero Dark Thirty and The Great Gatsby, is one of the starrier names attached to the show.

Image: The Underground Railroad follows the story of a young slave girl who escapes a plantation and makes her way across the US

The actor plays slave-catcher Ridgeway, who is hell-bent on catching Cora and follows her as she makes her way across the US, and admits he wasn’t initially keen to sign up.

“But the script, the book and Barry’s screenplays allowed us to see Ridgeway as a man that was more than just his job, and I think if he was just his job, just the terrible aspects of his job, it would be less dimensional.”

The actor, who has also turned his hand to directing in recent years, says learning about Ridgeway’s past helps to put the character into context.

“We learn that his father tried to set him on the right path to see everybody as equal and he chose a different thing and he’s grown up with the sense that his father was supremely ashamed of him and that he has a lot of regrets about the mistakes that he’s made and that he can’t correct those mistakes and all he’s doing is doubling down on this wrong path,” Edgerton said.

“I think Ridgeway is really not as alpha as he comes across, I think he’s a very damaged child that’s grown up into a man who’s somehow found himself in a powerful position and he feels he’s a failure, and if he’s not going to fail in his job, that’s going to make him a relentless force following Cora.

“I think it’s important to ask the question of people who hold these bigoted points of view in the world – it’s like, how did they get that series of thoughts in their mind? How did they get their world view?

“Because I don’t think we’re just born with a sense of treating other people badly, I think it’s the opposite, so who teaches this stuff? How do we get there?”

The Underground Railroad is available on Amazon Prime Video now. Hear our review on the latest episode of Backstage – the film and TV podcast from Sky News.