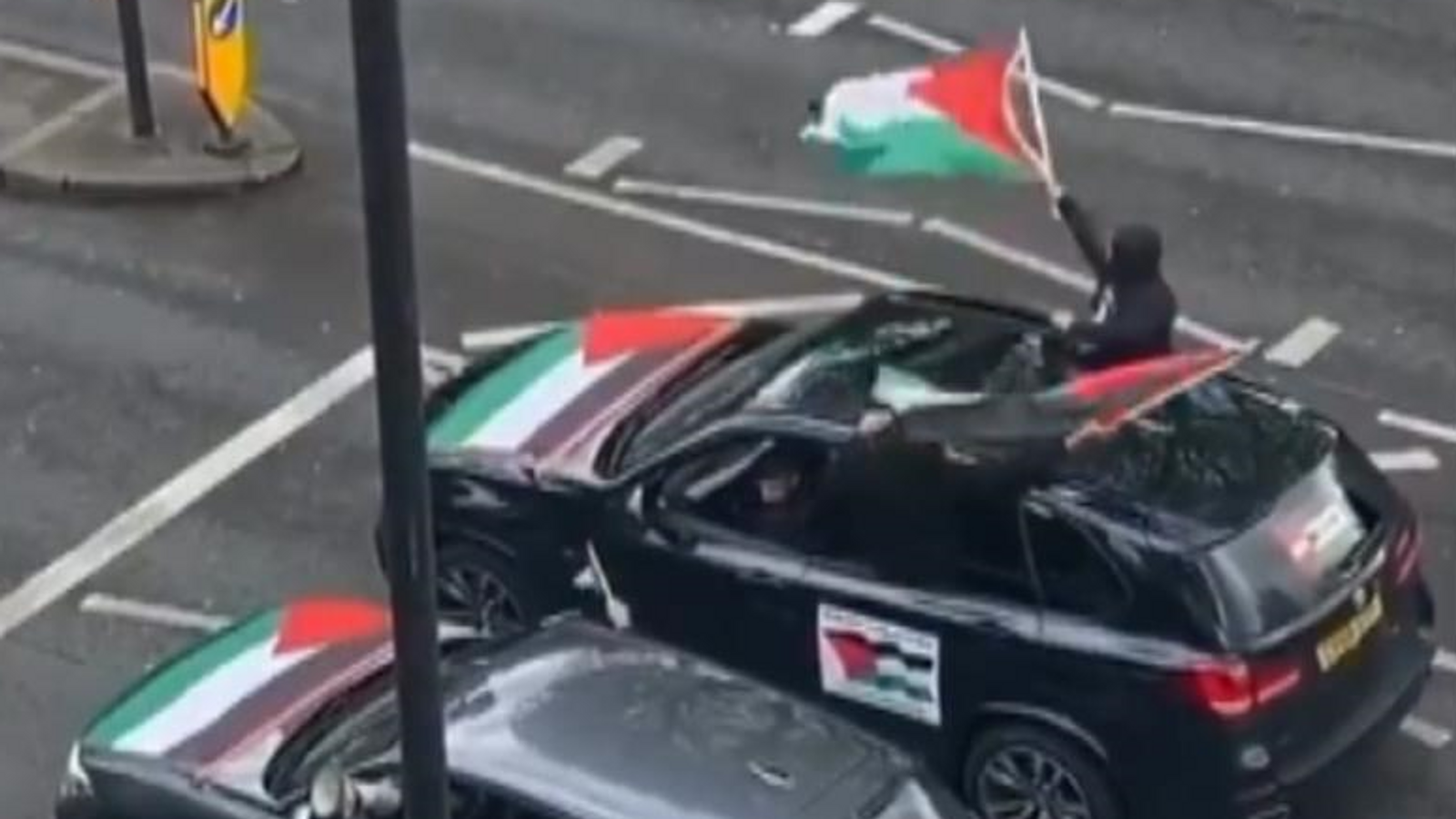 Four men have been arrested by officers investigating a video which appeared to show antisemitic abuse being shouted from a car in north London, the Metropolitan Police says.

It comes after footage was posted and widely shared on social media showing a group of cars decorated with the Palestinian flag pulling up at traffic lights.

As the group of cars arrive in the video, one person with a megaphone appears to be shouting abuse.

The events in the footage are described as having taken place in north London’s Finchley Road.

We are aware of a video appearing to show anti-Semitic language being shouted from a convoy of cars in the St John’s Wood area this afternoon. Officers are carrying out urgent enquiries to identify those responsible. This sort of behaviour will not be tolerated.

The Met Police investigation into the footage comes amid continuing violence in Gaza, which has seen 192 Palestinians killed, including 58 children and 34 women.

Thousands of people marched through London on Saturday to the gates of the Israeli embassy, while protests took place in other cities across the UK and Ireland in solidarity with the people of Palestine.

A statement from Scotland Yard read: “Officers investigating a video which appeared to show antisemitic abuse being shouted from a car in north London have made four arrests.

“Police received reports of people shouting anti-Semitic abuse from a car travelling within a convoy of vehicles through the St John’s Wood area on the afternoon of Sunday, May 16.

“Enquiries were carried out and officers traced a car to the A40 in Hillingdon. The police helicopter was deployed and officers stopped the car at approximately 18:30hrs.

“Four men were arrested on suspicion of racially aggravated public order offences. They were taken into custody at a west London police station where they remain.”

Image: The incident comes amid continuing violence in Gaza

Superintendent Jo Edwards, who is in charge of the policing operation, said: “This behaviour was utterly shocking and will not be tolerated.

“I understand that this would have caused considerable concern within the community and we have arranged extra patrols in the St John’s Wood and Golders Green areas this evening.”

Police also attended a planned demonstration on Whitehall on Sunday afternoon, but the Met said the event “passed peacefully and concluded without any arrests”.

Meanwhile, Essex Police are investigating an attack on an assistant rabbi on Sunday morning that could have been a religiously-aggravated assault.

Two teenagers in Chigwell are believed to have stepped out in front of the victim’s vehicle whilst he was driving, according to officers.

The pair shouted at him and spoke in a derogatory way about his religion before going on to damage his car, the force said.

When the man, aged in his 30s, got out of his vehicle to confront them, he was attacked with an unknown object, and ended up needing hospital treatment. During the attack, his phone was stolen.

The two boys, believed to be aged 15-18 and of Asian ethnicity, are thought to have left the scene on foot. One was 5ft 9ins tall and wore his hair in an Afro-style, while the other was 5ft 7ins. Both wore black jackets and the latter wore grey tracksuit bottoms.

Anyone with information about the incident should call Loughton CID on 101 quoting the crime reference number 42/92174/21, or they can contact Crimestoppers anonymously on 0800 555 111.

Londoners can expect to see high visibility police patrols, and @metpoliceuk have been working closely with @CST_UK. My team and I will continue to monitor the situation closely. 2/2

Following the incident in north London, the capital’s mayor Sadiq Khan tweeted “hate crimes are inexcusable and have no place in our city”.

“Londoners can expect to see high visibility police patrols, and the Met Police have been working closely with the Community Security Trust. My team and I will continue to monitor the situation closely,” Mr Khan added.

Prime Minister Boris Johnson has also criticised the apparent abuse of Jewish people ahead of a two-day religious holiday.

“There is no place for antisemitism in our society,” Mr Johnson posted on Twitter.

“Ahead of Shavuot, I stand with Britain’s Jews who should not have to endure the type of shameful racism we have seen today.”

There is no place for antisemitism in our society. Ahead of Shavuot, I stand with Britain’s Jews who should not have to endure the type of shameful racism we have seen today.

The arrests come as a rabbi has said that members of the Jewish community are “very afraid” that “threats could turn into actions”.

Rabbi Herschel Gluck said: “People are very concerned and very afraid about where this will lead.

“There is always the fear that threats could turn into actions.”

He added: “It is very important to emphasise in London that the Muslim and Jewish communities stand shoulder to shoulder and in a great spirit of solidarity. There aren’t tensions locally, all these tensions are coming from people who have never seen a Jew and they are coming from outside London.”