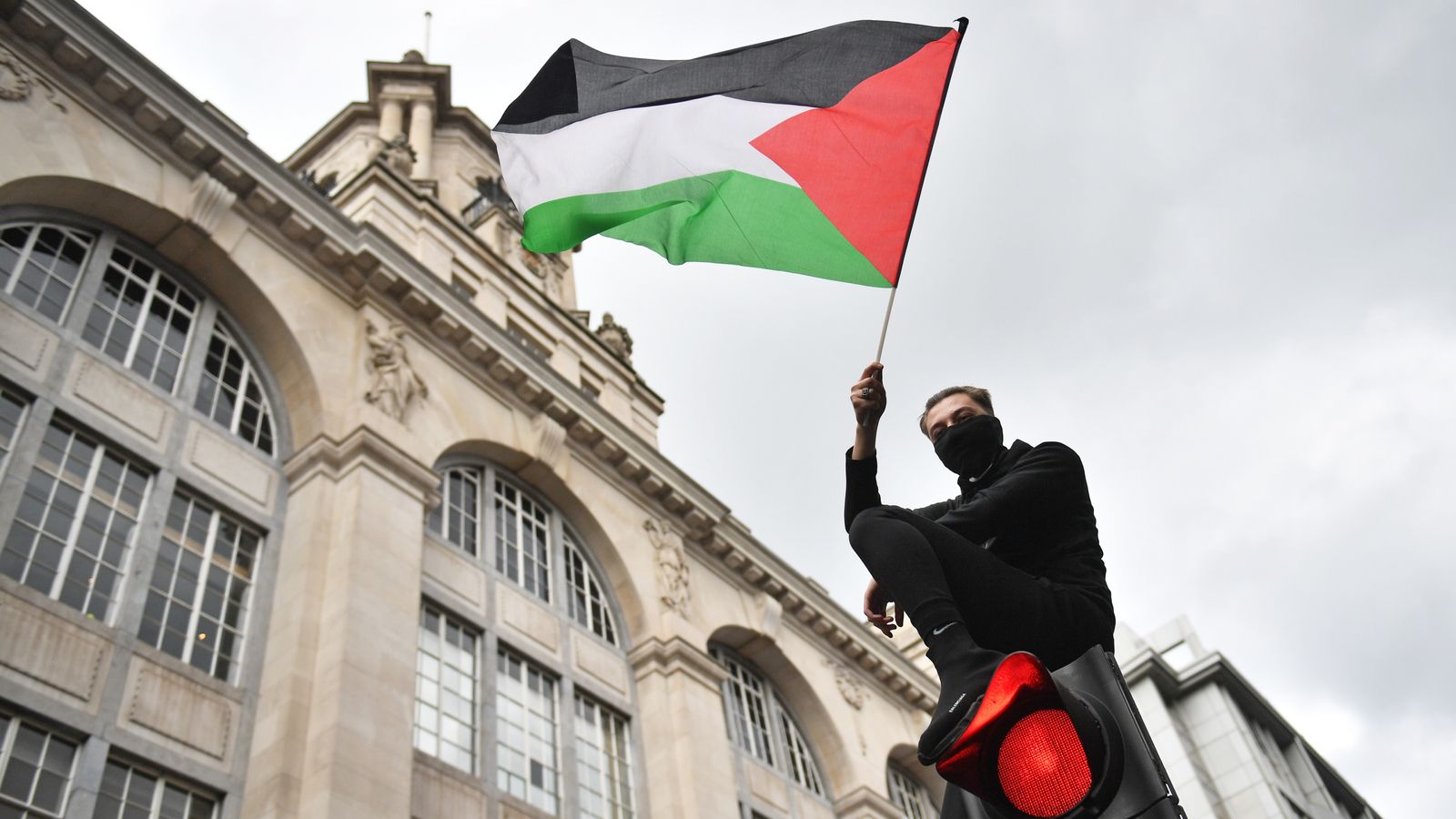 An Israeli airstrike that levelled a media tower in Gaza has been branded “completely unacceptable” by Labour, as thousands of people gathered on the streets of central London in solidarity with Palestinians amid the conflict.

The high-rise building – housing journalists from international outlets including the Associated Press and Al Jazeera – was destroyed on Saturday afternoon local time.

The strike – an hour after people were told to evacuate the building – came as fighting raged, with eight children among 10 Palestinians from an extended family killed by an earlier Israeli strike in Gaza City.

Image: Protestors marched to the Israeli Embassy in London

“The devastating escalation of violence – including Hamas rocket attacks on Tel Aviv and air strikes on the Gaza City refugee camp – has cost more civilian lives and we condemn it in the strongest possible terms.

“The UK must join our international partners in calling for an immediate ceasefire, an end to all rocket attacks and air strikes, and work with both Israeli and Palestinian leaders to prevent this dangerous situation deteriorating further.”

Organisers of the march in London have demanded “immediate action” from the UK government to end the “brutal” violence against the people of Palestine.

By Saturday afternoon, thousands of people had marched through Hyde Park in central London, chanting “free, free Palestine”, and gathered outside the Israeli embassy in Kensington.

Organisers say that 100,000 people had joined the crowds in Kensington outside the embassy.

On a makeshift stage on Kensington High Street, Labour’s Diane Abbott told the crowd: “We must remember we are part of an international movement.

“This is a worldwide movement for justice. Palestinian people are having their land seized… and they are now being killed in their homes. All of this is illegal.”

Former Labour leader Jeremy Corbyn also spoke, saying: “It’s our global voices that will give succour, comfort and support in those settlements alongside Gaza and all over the West Bank, East Jerusalem who are suffering at this time.”

Husam Zumlot, Palestinian ambassador to the UK, told those gathered: “This time is different. This time we will not be denied any more. We are united. We have had enough of oppression.

“Today we are saying enough, enough with the complicity. Thank you for standing with us.”

Sky’s Ali Fortescue was in central London on Saturday afternoon, speaking to those at the protest.

Hibo Jama came to the protest to “stand up for human beings”.

She said: “I’m watching all the stuff that’s going on in Palestine and it’s not right, it’s not fair. I will stand up for anyone who is going through anything like this regardless of their religion or their colour.

“People came out to show how sorry they are and how bad they feel about the situation, it’s peaceful but this is a way for people to show they actually care. There are a huge number of people here, it’s amazing.”

Image: Hibo Jama told Sky News that what is happening ‘is not fair’

Rohani said she was there because she wants to “publicise what’s being done to the people of Palestine”.

She said: “It’s a peaceful demonstration, but who knows if anyone is listening, it doesn’t feel like it but it’s better than nothing.”

Image: Rohani spoke to Sky News at the protest

It comes after thousands of Palestinians were forced to flee their homes after days of sustained attacks.

Since Monday evening, Hamas, a Palestinian militant group, has fired hundreds of rockets towards Israel, which responded by attacking the Gaza Strip with tanks and air strikes.

On Saturday afternoon, the Israeli Defence Forces brought down a building in Gaza City that housed media outlets such as Associated Press and Al Jazeera, claiming Hamas were also using the building.

Occupants were given around an hour to leave the offices, with the blast captured on live television.

Saturday’s demonstration in London was organised by Palestine Solidarity Campaign, Friends of Al-Aqsa, Palestinian Forum in Britain, Stop The War Coalition, Campaign for Nuclear Disarmament and the Muslim Association of Britain.

A spokesperson for the organisers said: “It is vital that the UK government takes immediate action.

“It must stop allowing Israel’s brutal violence against and oppression of the Palestinian people to go unpunished.

“The bombardment of Gaza which is killing civilians including children is a war crime.

“The UK Government is complicit in these acts as long as it continues to offer Israel military, diplomatic and financial support.”

The Metropolitan Police said: “Officers are engaging with a group of people who have gathered for a demonstration in central London this afternoon.

“A policing plan is in place to ensure everybody is kept safe and to reduce the spread of COVID-19.”

As well as London, there are also a number of smaller demonstrations across the UK, including in places like Leeds and Cardiff.

Santander apologises for problems with app, ATMs, cards and other services