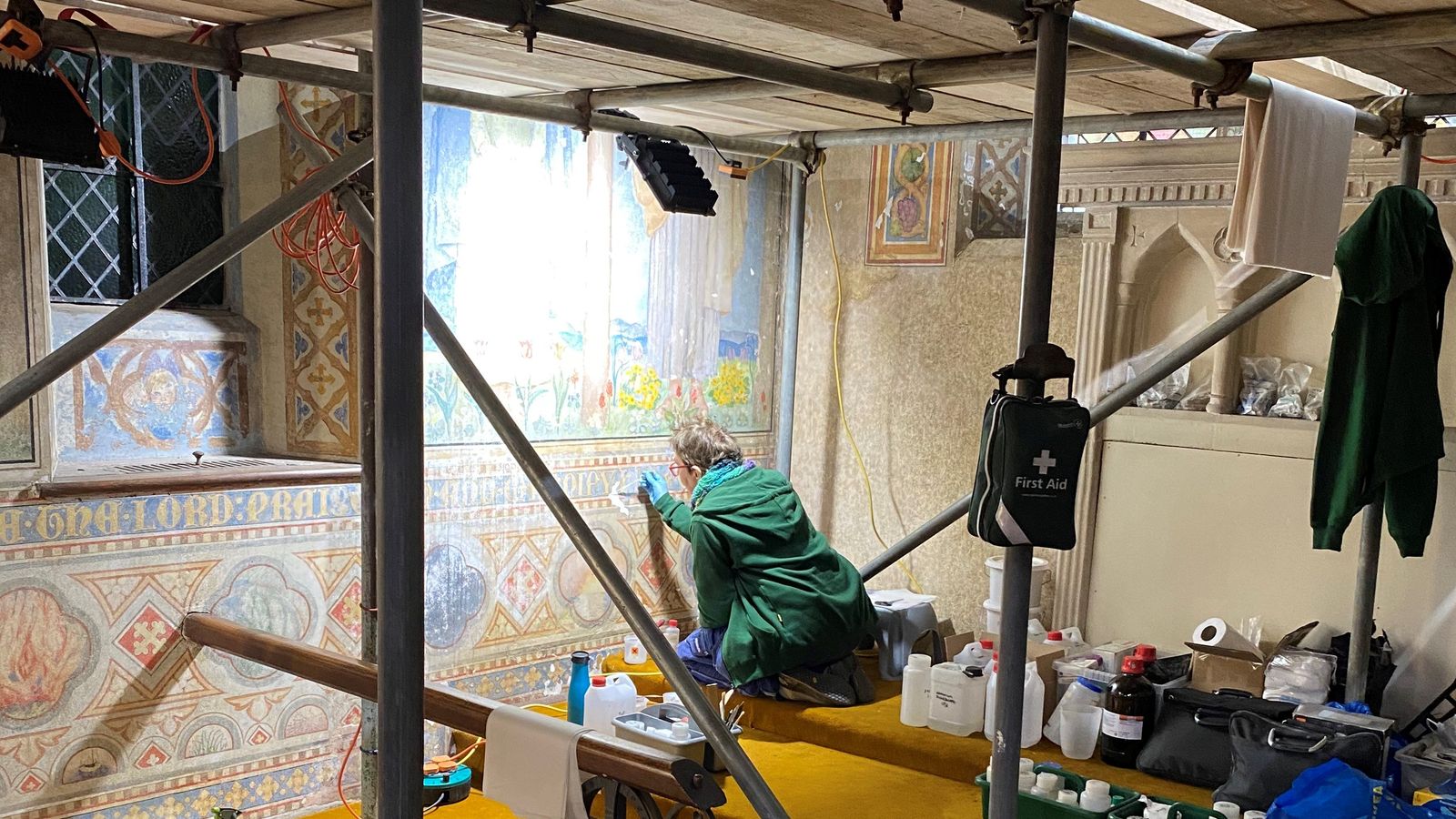 A church in Surrey is restoring murals by an unheralded female artist whose paintings have been described by experts as being of “national significance”.

Work has started at St Mark’s in the parish of Badshot Lea and Hale to clean and re-colour life-size pieces completed in the early 20th century by Kitty Milroy, who lived in the nearby town of Farnham.

Milroy died in 1966, aged 81, and despite her pieces filling the chancel walls between the altar for almost a century, the artwork had largely gone unnoticed until it was stumbled upon about five years ago by Nick Seversway, a local picture restorer.

Image: Kitty Milroy’s artwork had largely gone unnoticed until it was stumbled upon about five years ago. Pic: Nick Seversway

That day, during an evening service, he watched the moonlight hit her depictions of scenes from the Bible, local people, and landscapes, becoming “obsessed” with finding out more about them.

“As I looked at the paintings I was struck by how sad it was that they were deteriorating,” said Mr Seversway, who helped set up a “Kitty Committee”, working with local historians and the parish to pore over hundreds of documents, building a picture of who Milroy was.

“This would be something very difficult for just an amateur to do.”

While Mr Seversway and the historians uncovered Milroy’s family history, the church campaigned for donations, eventually raising enough money to pay for the services of mural conservationists Stephen Rickerby and Lisa Shekede, who began working on the art in April.

Image: Nick Seversway, a picture restorer, has been researching the artist and her work Image: The parish is raising £10,000 to cover additional costs, like a new roof to protect the paintings from water damage

The pair, who have collaborated with the Courtauld Institute of Art and restored wall paintings around the world, feel Milroy’s work ranks among the best contemporary symbolist paintings of its time.

“This is a stunning example of a period of art in the 1910s and 1920s when women artists were gaining a reputation and Kitty Milroy’s work is fantastic, it’s an amazing standard of work,” said Mr Rickerby.

“Doing a wall painting is not an easy thing to do – you’re working on a monumental scale.

“She was a major – but unrecognised – artist.

“She went through her life not being recognised for her talent and it would be gratifying to see that reputation restored to her through this one remaining mural that’s left.”

Image: Restorer Stephen Rickerby says the standard of work is ‘amazing’. Pic: Richard Heath Image: Lesley Crawley, the vicar of St Mark’s, hopes a website can be created to show the murals to the world

Researchers recently learned Milroy studied at Slade School of Fine Art in London, while old photographs support the theory that she used local people as models, including one of her sisters and the family gardener.

Although the first stage of the restoration is due to be completed in around five weeks, there is more work to be done.

The parish is raising £10,000 to cover additional costs, like a new roof to protect the paintings from water damage, as well as acrylic glass screens and better lighting.

The money will also go towards a website and other materials raising awareness about Milroy’s life.

Lesley Crawley, the vicar of St Mark’s, said: “The church is a place of restoration and we are delighted that we get to play a part in the physical restoration of this beautiful artwork.

“It takes a bit of effort to put something on the map in terms of a tourist attraction and so we’re going to need banners and leaflets and other ways of publicising.

“It would be really nice to have a website for all the pictures so people can see them across the world.”

Emergency alerts for terror attacks, floods and other disasters to be sent directly to your phone