COVID-19: ‘Nothing conclusive’ to say end of restrictions will be delayed 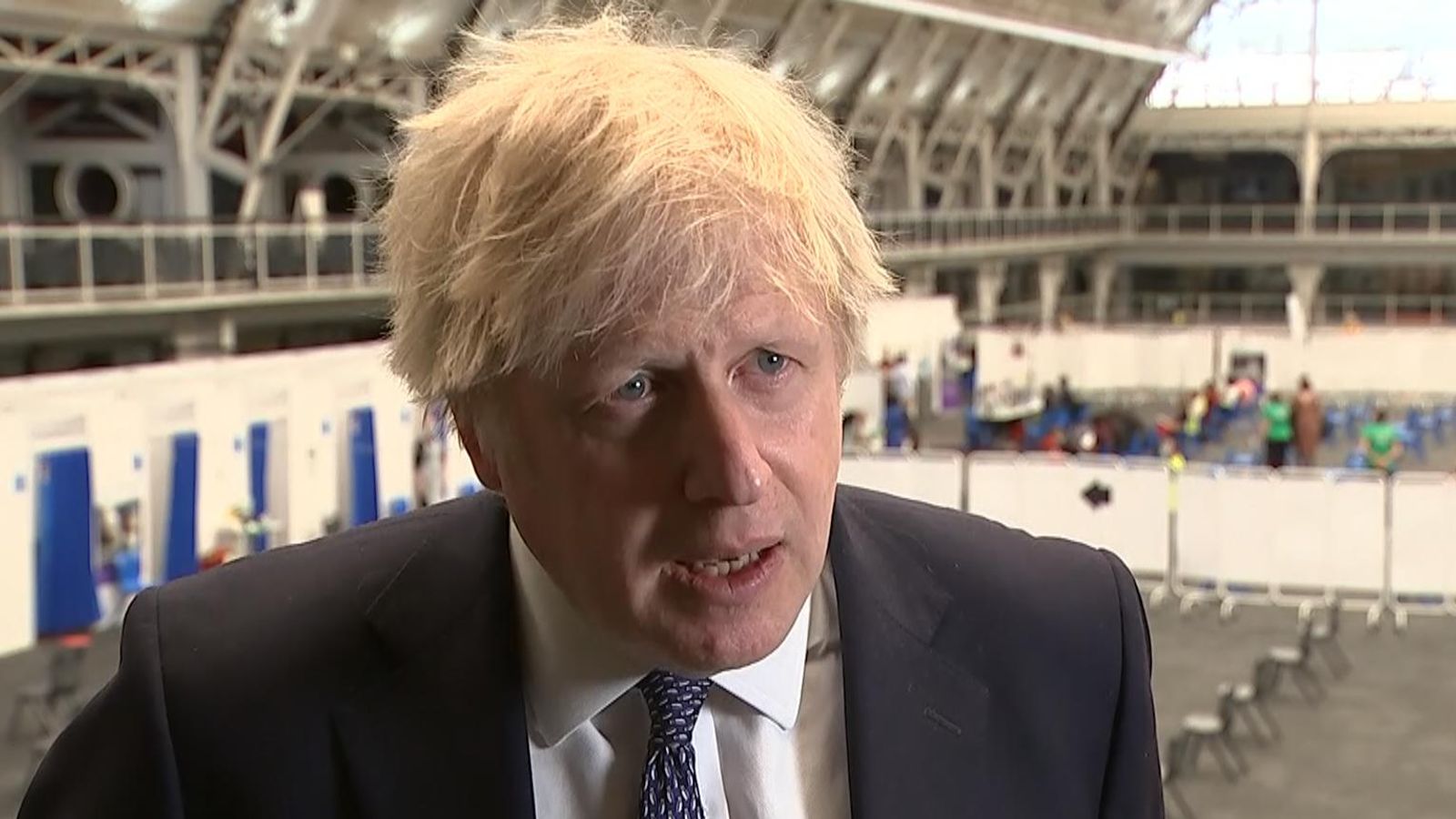 Boris Johnson has said there is “nothing conclusive to say we need to deviate” from plans to end coronavirus restrictions next month.

Amid fears that rising cases of the Indian COVID variant could push back England’s roadmap out of lockdown, the prime minister said “we are looking very carefully at the data…what’s happening…the epidemiology…the extent to which the new variant may be more transmissible.”

He said “we will know a lot more in a few days’ time” and promised to “keep people informed” and “continually updated”.

He stressed it underlined the need for people to get vaccinated, if they are eligible.

Speaking at a vaccination centre at north London, Mr Johnson said: “The numbers are incredibly high. And I know that… some people have been more vaccine hesitant than others, but actually, across the whole of society, the numbers continue to go up in every group.

“And that’s very, very encouraging. And I would urge everybody – just to make the obvious point – who is eligible for a vaccine, when you get your call up, when you get the notification from the NHS, come and get your jab.

“We’re trying to work out to what extent the new variants, the Indian variants may be more transmissible. At the moment, we see nothing conclusive to say that we have to to deviate from the road map. Obviously, we’ll be keeping people informed.”

At around the same time as the PM was speaking, his spokesperson told reporters the key factor in making the decision would be data on the transmissibility of the variant, and they don’t have that information at present.

It comes hours after Environment Secretary George Eustice warned that rising cases of the Indian variant could delay the easing of restrictions and force the government to impose local lockdowns.

When asked if the proposed end of restrictions in England on 21 June may not go ahead as planned, Mr Eustice told Sky News: “We cannot rule anything out.”

He said imposing local lockdowns in areas where the population remains at risk while opening up the rest of the country is one of the options being looked at.

Follow live coronavirus updates from the UK and across the world

Mr Eustice said: “The prime minister said we will take this one step at a time.

“Just yesterday, we’ve had a further set of easements… We need to see how that beds down over the next two to three weeks, and then shortly before the 21 June, we’ll be in a position to assess whether we can go to that next stage.”

Asked if the government was actively looking at imposing local restrictions on areas that are still struggling after 21 June, he added: “That would be an option.

“We cannot rule anything out, but our preferred outcome is that we really double down and get the vaccination rates up in those areas that are seeing these problems so that we can give them the immunity that they need, and then we won’t have to have any such local lockdowns.”

On Monday, people across England were again able to enjoy hugs with loved ones, indoor pints and foreign holidays – but Boris Johnson has urged a “heavy dose of caution”.

Was India put on the red list too late?

Mr Eustice’s comments come after ministers stepped up calls for people to get a COVID jab as soon as they are offered one amid fears over the spread of the Indian variant.

As the number of cases of the Indian variant B.1.617.2 nearly doubled in a week to 2,323, Mr Hancock told the House of Commons on Monday that the majority of people admitted to hospital in Bolton with it had been eligible for the jab but had not taken it up.

Sky analysis found the Indian coronavirus variant of concern appears to be spreading rapidly, with a 44% weekly increase in the number of areas in England recording a case.

The variant was detected in 127 local authorities in the week ending 8 May – compared with 71 the week before, according to figures from the Wellcome Sanger Institute.

Bedford has the second-highest rate of coronavirus in England, with 214 new cases recorded in the seven days to 13 May. It has 80 confirmed cases of the Indian variant.

The town’s director of public health, Vicky Head, said she was “really worried” about the rise in cases.

“What we think now is that pretty much all of our cases are likely to be the variant from India,” she told BBC Breakfast.

Labour said it was “wary” of local lockdowns, because of the impact on places like Bolton and Blackburn where the towns have been under extra restrictions for much of the last year.

Labour’s shadow housing secretary Lucy Powell told Sky News: “We would be very reluctant and wary to go down the road of local lockdowns.

“They didn’t really work at last time, but they became incredibly difficult and divisive for those areas that were put in early lockdown and poor old Bolton and Blackburn have really been at the forefront of this for the last year.

“So… let’s get that surge vaccination, that surge testing capacity very, very quickly into these areas. And hopefully we’ll be able to see some of this off.”

Professor Gabriel Scally, a leading public health expert, told Sky News “we should be throwing the kitchen sink at this” in places like Bolton and Blackburn to reduce infection.

“As well as that, we do need a lot of vigilance and a lot of information to the public so that they understand that the virus hasn’t gone away, it’s still there and it may be much, much more infectious,” he said.

“We also need to stop the importation of it and that means better border controls, a proper quarantine system.

“We’ve been let down badly by the large number of cases that the UK has imported of this dangerous variant that was first identified in India.”

He said local directors of public health had not been “given the power” to do their jobs and should be empowered to make decisions, including vaccinating younger age groups.