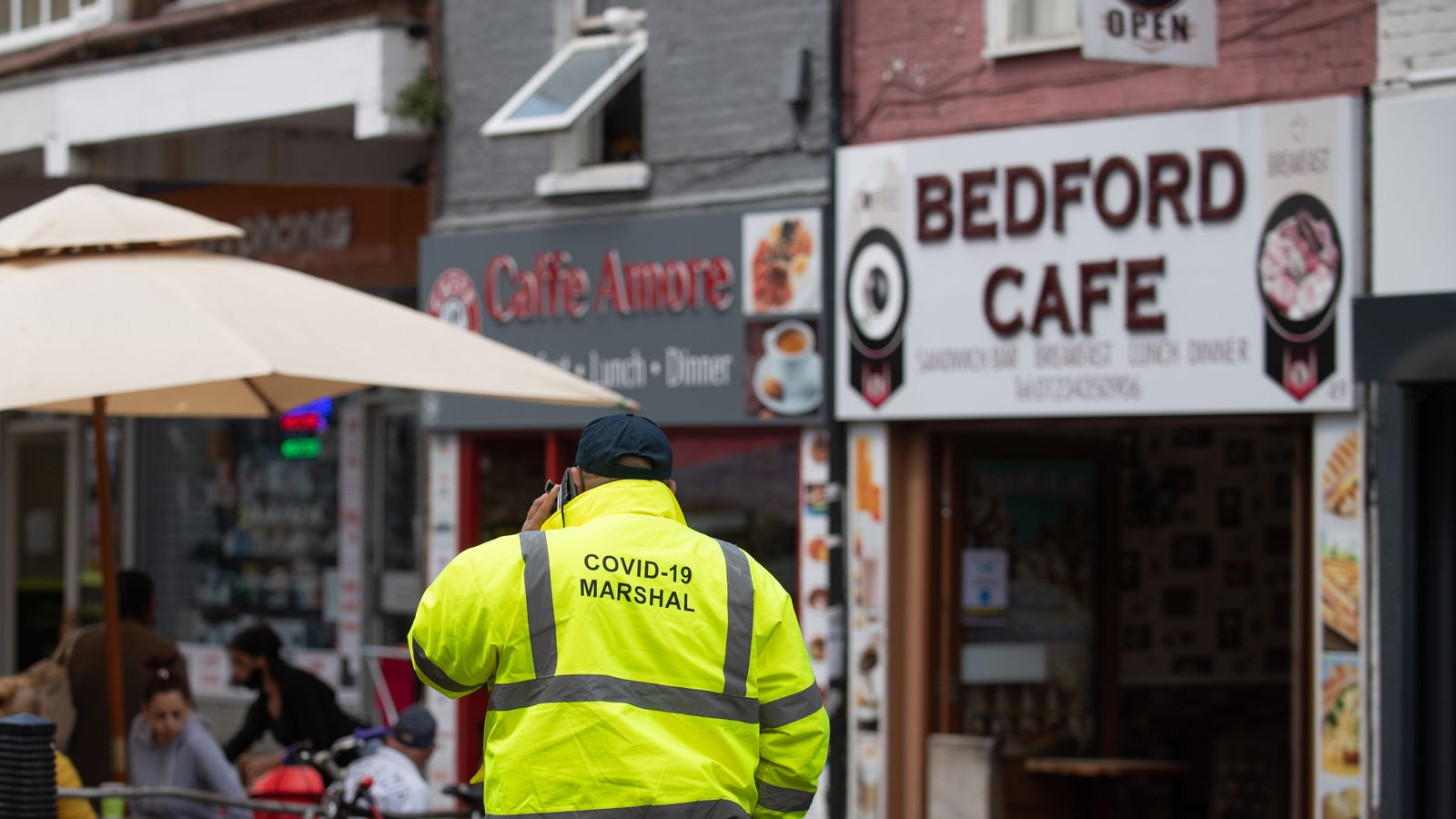 The Indian coronavirus variant of concern appears to be spreading rapidly, with a 44% weekly increase in the number of areas in England recording a case.

The variant was detected in 127 local authorities in the week ending 8 May – compared with 71 the week before, according to figures from the Wellcome Sanger Institute.

However, 40 of the 127 areas only identified one case.

It comes as Health Secretary Matt Hancock said on Monday that 2,323 cases of the more transmissible variant had now been recorded in the UK.

The variant – B.1.617.2 – is expected to eventually become the dominant form of COVID, according toProfessor Chris Whitty.

The prime minister has also said it could delay the final stage out of lockdown on 21 June, when most remaining restrictions are set to be scrapped.

A few areas of northwest England have been identified as hotspots for the variant, as well as – further south – Bedford, and the Wellcome Sanger Institute data back this up.

It found cases in Bolton had more than doubled compared with the week ending 1 May, with 289 identified in one week.

On Monday, Mr Hancock told the Commons that cases in Bolton and and Blackburn had doubled over the past week and were rising in all age groups.

He said surge testing would also be carried out in Bedford.

Importantly, scientists believe B.1.617.2 does not cause more severe disease than the currently dominant Kent variant, and indications are that vaccines are also effective.

But government advisory body SAGE believes there is a “realistic possibility” transmissibility could be 50% higher.

Experts say that could cause a big spike in cases and hospitalisations if no restrictions are imposed.

SAGE warned there still aren’t enough vaccinated adults and that the variant could cause “a significant resurgence that ultimately could put unsustainable pressure on the NHS”.

Data from the four areas with the highest number of B.1.617.2 cases show infections are lower in over-60s – a group more likely to be fully vaccinated. Younger people are the primary concern for passing it on.

The health secretary has also said the handful of patients in hospital with the variant are unvaccinated and that it is “not tending to penetrate” older vaccinated people.

Across England, NHS figures show 14% of under-40s have had at least one vaccine dose, but in Bolton it is only 6%, and 4% in Sefton.

Bedford and Blackburn are close to the national average at 14% and 12% respectively.

There had already been concerns about the 17 May easing of restrictions in light of the new variant – with fears increased indoor mixing could accelerate its spread.

Former chief scientific adviser Sir Mark Walport told Sky News there was “good reason to be concerned” and that he personally would avoid going inside a pub “for the moment”.

Recent research examined 20 studies on the role of hospitality in the transmission of coronavirus and found the closure of hospitality was among “the most effective measures”.

If the increasing variant cases lead to more hospitalisations, pressure will inevitably grow to postpone next month’s final step out of lockdown – when venues such as nightclubs are set to open again after more than a year.

COVID-19: Coronavirus vaccine rollout extended to 36 and 37-year-olds as cases of Indian variant double in a week