COVID-19: Why meeting final lockdown roadmap target may not mean the end of debates about our freedoms 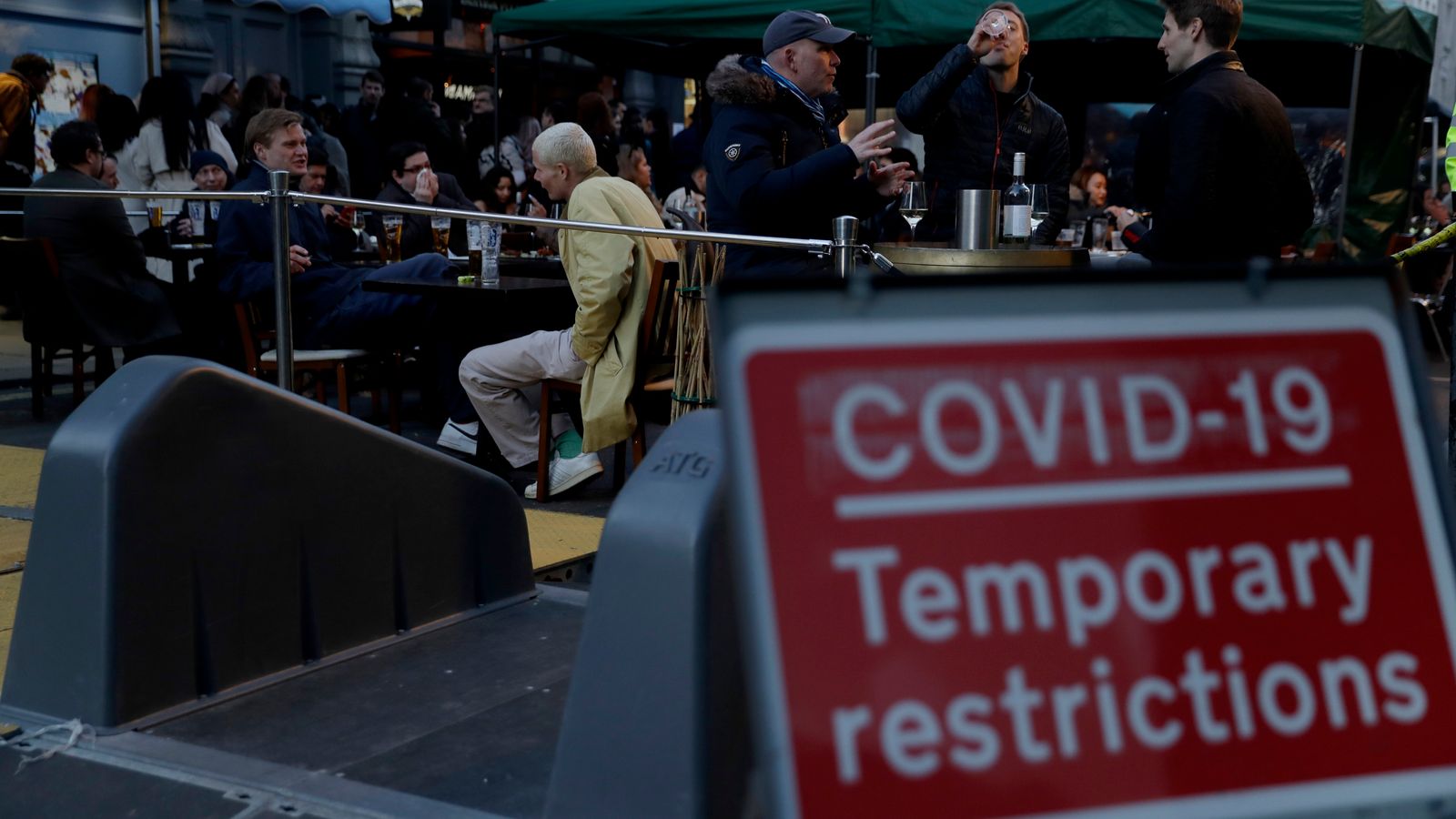 When the prime minister set out his cautious (and long) roadmap to freedom in February, he knew there would be bumps along the road.

Cabinet ministers privately spoke of the new waves of infection as the country gradually unlocked.

Would it be around school reopenings (in the end it wasn’t), or congregating with friends in restaurants and pubs (still waiting for that)?

Or would it be the scourge of a new variant of COVID-19 that could throw the whole plan off course?

Ministers and scientific advisers couldn’t predict what would cause wobbles or even derailment but they could predict, as one cabinet minister put it to me, that “it wouldn’t be a linear path” out of lockdown.

And as we get to the home straight, we’ve hit a big bump in the road with the race between the vaccine and the virus tightening.

But after quite a tense few days, there are tentative signs that a complete derailment of freedom day on 21 June will be avoided.

The prime minister in the House of Commons on Wednesday told MPs that he had “increasing confidence that vaccines are effective against all variants, including the Indian variant” – the strongest hint yet the roadmap could remain on track.

Professor Jonathan Van-Tam doubled down on this at the Downing Street briefing on Wednesday night.

The deputy chief medical officer suggested the transmissibility of the new variant would be in the range of perhaps 25-30%.

He said: “We have a credible range that goes from a few percent more transmissible through to… 50% more transmissible. I think most people feel it is going to be somewhere in the middle, rather than at the extremes of that band.”

This is critical because at that level of transmissibility, the unlocking on 21 June should be able to go ahead, a senior government figure tells me.

Nerves were jangling when early data came in from Bolton and Blackburn suggesting much higher transmissibility than that.

But scientists now think the higher growth rates could have been sparked among people who have travelled, or who were more likely to live in multi-generational households or in deprived areas. In other words, high transmission was perhaps driven by environmental factors as well as the potency of this new strain.

Vaccine effectiveness against the Indian variant appears to be holding up, too. If the data in the coming days confirms these trends, then the risk of huge spikes in hospitalisations cedes and the unlocking looks to remain on track.

The answer then to whether we can go ahead as planned on 21 June will be clearer next week when scientists have seen more data. But inside government, senior ministers are very clear.

As one said to me, “the prime minister will move heaven and earth to stick to that date”. Another Johnson ally admitted that it would be politically “very bad” to miss the 21 June unlocking moment.

“We told people in December the vaccine would be our way out of this and this would be our final heave. To go back on that would be very difficult,” they said.

But what the new variant does point to – with the heavy caveat of this still being early days – is that we could have freedom with some strings attached in the form of mitigations to protect against virus spread.

That could be in the form of masks in settings on public transport or in shops or requirements for COVID certification status to go to concerts or other big events.

But when it comes to social distancing, one senior government figure pointed out that maintaining one-metre plus rules indoors would render the unlocking meaningless and have a material knock on for businesses who regard 21 June as their lifeline to survival after an extremely difficult year.

Mark Harper, chair of the backbench COVID Recovery Group, made the wishes of his group very clear to me in an interview on Wednesday – that this should no longer be about transmissibility but the link between infections, hospitalisations and death.

He said: “All the evidence that we have so far is that the vaccines are effective against the Indian variant. As long as that remains the case I don’t see any reason for not unlocking fully on 21 June, which means following the roadmap, getting rid of social distancing so that businesses can operate and we can all go back to normal.”

And from Conservative Marcus Fysh, this: “I won’t be supporting or observing restrictions after 21 June while hospitalisations continue to be manageable. Rationality needs to return.”

These MPs then wanting 21 June to proceed; social distancing to be scrapped and COVID passports to be shelved.

It will be politically hard enough for the prime minister to push through caveats to our freedoms, let alone delaying for a day longer the route out of lockdown – unless our hospitals are in danger of being overwhelmed.

We watch and wait as the government rolls out surge testing and surge vaccination. The next few days of data will be key.

But even if the prime minister can stick to the date, there could be well be battles further down the road about what our freedoms might really entail.