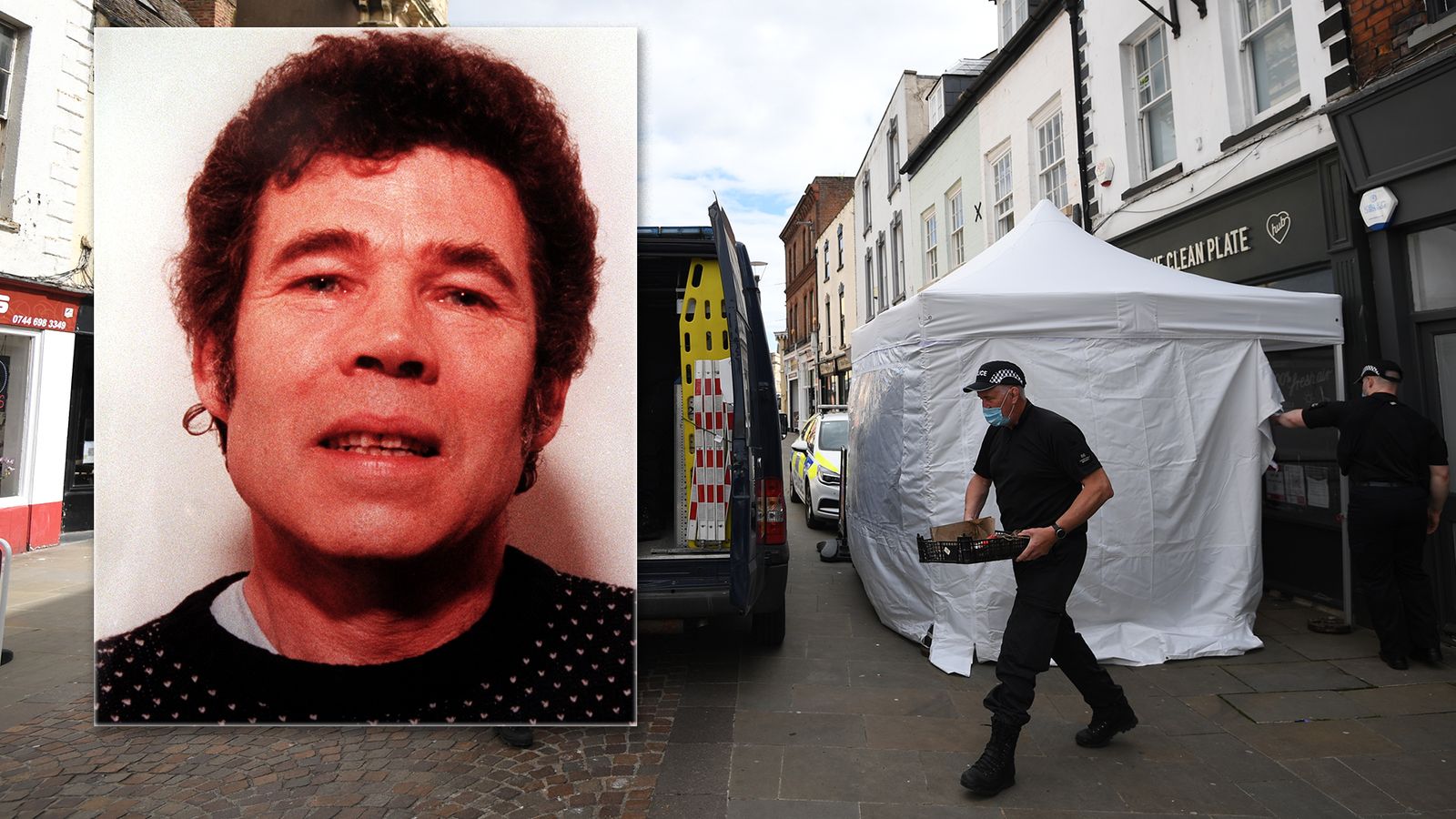 In the centre of Gloucester, a highly trained team of archaeologists, anthropologists, scene of crime officers and search officers are excavating the basement of the Clean Plate café.

They’re looking for possible human remains belonging to Mary Bastholm, who went missing in 1968 at the age of 15.

Their work is complex, painstaking and meticulous – and being carried out in confined spaces.

The dig is expected to last around two weeks.

“It’s probably about 20m long by 10m wide. It’s not an expansive area. It’s a very old building, several hundred years old and we have a number of challenges.

“There are a lot of other hazards including very low ceilings – around four to five feet. A lot of the time our staff are having to work bent over. It creates for quite a challenging environment; a lot of our time is spent on hands and knees crawling around.”

Image: A photo taken by a TV crew is said to show blue material buried in one area of the cellar of the cafe Image: ‘Voids’ were discovered under the cafe basement’s toilet block

The cellar is split into two sections.

“The coal cellar section at the front of the building and the toilet at the back,” he says. “Part of the planning for this was how best to approach the six voids – you don’t want to have to dig and then climb over it to get through.”

Over the last week, police have identified six so-called “voids”, using ground-penetrating radar equipment. Essentially, they are gaps or holes in the ground that are abnormal.

“Each void will be investigated one at a time,” says Mr Cuffe.

“For an archaeological process like this you want to exclude the possibility that you’re cross-contaminating and moving things between voids.

As each void is searched, there is a delicate process to follow, explains Mr Cuffe: “Material is transported to a separate part of the address where its being subject to a delicate sieving process just so we don’t miss anything and to look for anything of interest.

“That could be human remains, but it could also be items of evidence, personal property or belongings.

“Once sieved it’s then transported and sorted to another location within our cordon. We can then go back and review each section.”

Image: Police activity outside the café

What happens if they find bones?

Mary was wearing a blue coat and carrying a blue bag when she went missing 53 years ago – and what could be blue material has already been spotted during initial examinations.

Specialist officers are on standby to test that – and identify any potential human remains.

Mr Cuffe says: “The first thing that we would do is confirm the item is from human origin. We have the trained people on site who can firstly identify that.”

If human remains are found, there are a range of identification options: “We may consider odontology, which will be one way of identifying if the remains belong to Mary, we’d use a forensic odontologist to look at teeth if we found teeth to compare those to any dental record that are held in relation to Mary.

“The other option is DNA. Unfortunately, we don’t have a pure sample of Mary’s DNA but what we can do is look at DNA sampling from blood relatives. There is an historic sample held from her brother and we have the option to look into living relatives.”