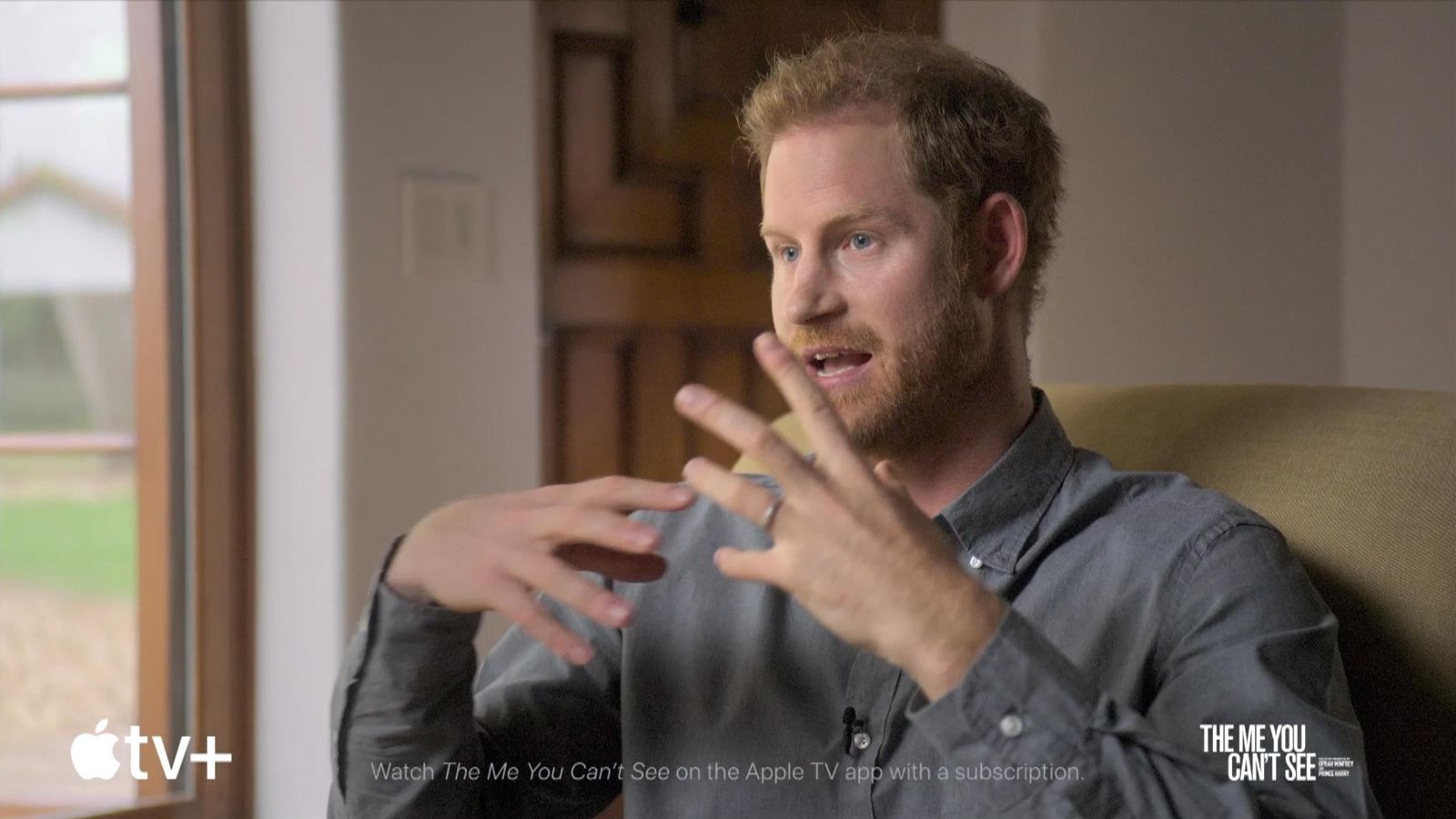 The Duke of Sussex has accused the Royal Family of “total neglect” in a new documentary series about mental health.

Speaking to Oprah Winfrey, Prince Harry also revealed he turned to drink and drugs as an adult following the death of his mother, Princess Diana.

In the new interview, he said he and Meghan were “followed, photographed, chased and harassed” within days of their relationship becoming public.

However, he claimed they received little support as they were attacked on social media and in some newspapers.

Image: Harry says he has ‘no regrets’ about moving to the US. Pic: YouTube

“I felt completely helpless. I thought my family would help – but every single ask, request, warning, whatever it is, just got met with total silence or total neglect,” the duke told Oprah Winfrey.

“We spent four years trying to make it work. We did everything that we possibly could to stay there and carry on doing the role and doing the job.”

Prince Harry was taking part in The Me You Can’t See, a new programme on Apple TV+.

The series was released hours after an independent inquiry found that journalist Martin Bashir used “deceitful behaviour” to secure a landmark interview with Princess Diana in 1995.

After the findings emerged, the Duke of Cambridge said the BBC Panorama broadcast contributed significantly to the “fear, paranoia and isolation” his mother felt.

Meanwhile, the Duke of Sussex released a statement that said “the ripple effect of a culture of exploitation and unethical practices ultimately took her life”.

During the new documentary, Harry claimed that his family did not speak about the death of his mother Diana, and just expected him to deal with the resulting press attention and mental distress.

“That doesn’t make sense. Just because you suffered doesn’t mean that your kids have to suffer, in fact quite the opposite – if you suffered, do everything you can to make sure that whatever negative experiences you had, that you can make it right for your kids.”

In the programmes, Harry said: “The clicking of cameras and the flashing of cameras makes my blood boil. It makes me angry and takes me back to what happened to my mum and my experience as a kid.”

He spoke in detail about the impact that his mother’s death had on his childhood.

Image: During the new documentary, Harry claimed that his family did not speak about the death of his mother Diana. Pic: AP

Describing her funeral, he said: “It was like I was outside of my body and just walking along doing what was expected of me – showing one-tenth of the emotion that everybody else was showing.”

The duke added: “I was so angry with what happened to her, and the fact that there was no justice at all. Nothing came from that. The same people that chased her into the tunnel photographed her dying on the backseat of that car.”

“But I slowly became aware that, okay I wasn’t drinking Monday to Friday but I would probably drink a week’s worth in one day on a Friday or a Saturday night.”

He described the time when he was 28 to 32 years old as a “nightmare” as he suffered from panic attacks and severe anxiety – “freaking out every time I jump in a car or see a camera”.

Prince Harry: I had to deal with my past

Prince Harry also said that he began therapy four years ago, and had been encouraged to seek help by Meghan after they had an argument.

“I knew that if I didn’t do the therapy and fix myself, that I was going to lose this woman who I could see spending the rest of my life with,” he said.

“There was a lot of learning right at the beginning of our relationship. She was shocked to be coming backstage of the institution – of the British Royal Family.”

The duke also said that the run-up to the couple’s interview with Oprah Winfrey took its toll because of “the combined effort of ‘the firm’ and the media to smear” Meghan.

Harry said that he has no regrets about moving to the US, and says therapy has equipped him “with the ability to take on anything”.

He added: “I’m now more comfortable in my own skin. I don’t get panic attacks. I’ve learned more about myself in the past four years than in the 32 years before it.”