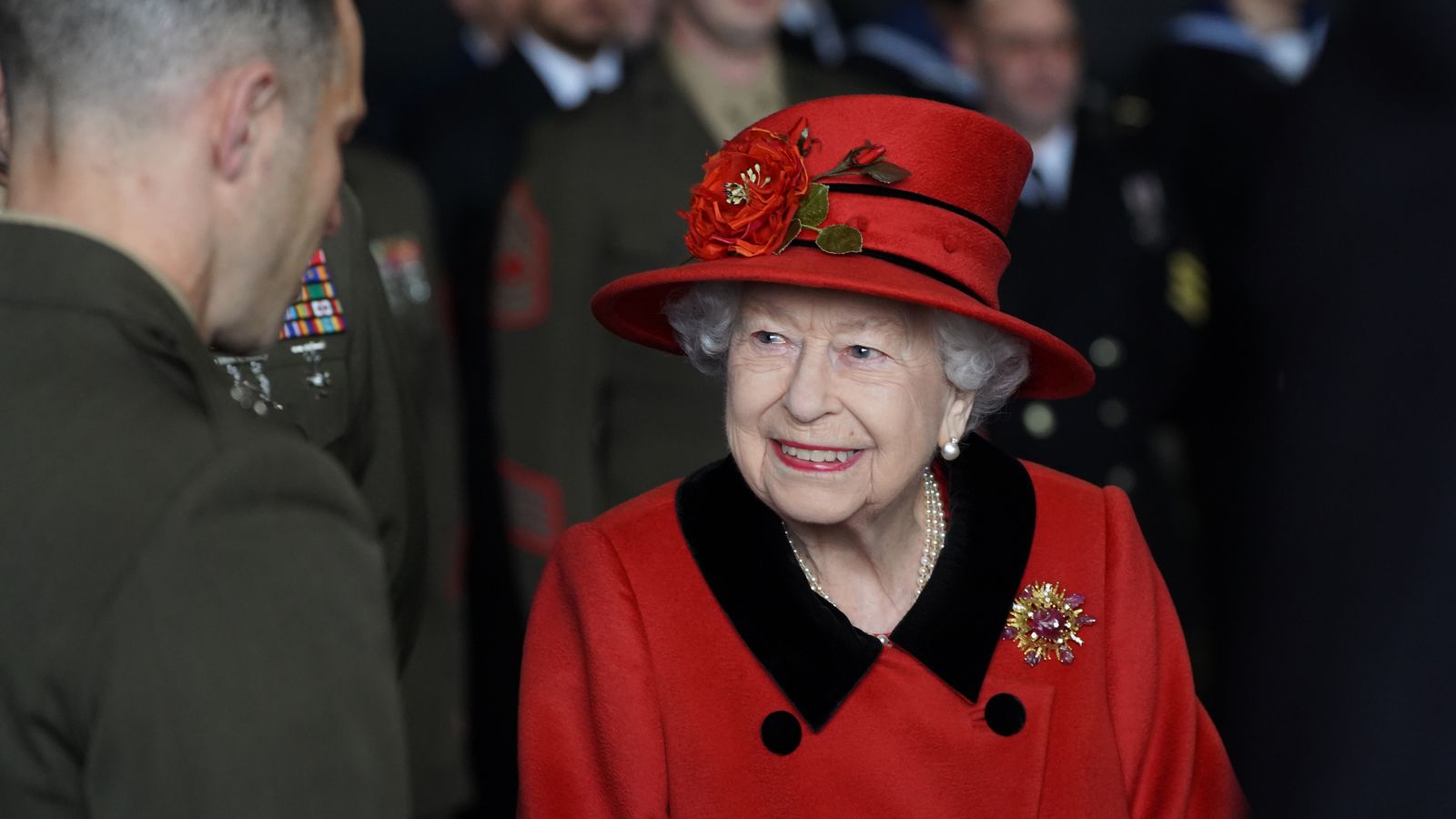 The Queen has visited a Royal Navy warship named after her ahead of its deployment to the Indo-Pacific region as the UK deepens its defence partnerships.

The £3 billion HMS Queen Elizabeth, which has eight RAF F35B stealth fighter jets on board, will depart for Asia later on Saturday along with six Royal Navy ships, a submarine, 14 naval helicopters and a company of Royal Marines.

Commanding officer Captain Angus Essenhigh greeted the Queen with Commodore Stephen Moorhouse, commander of the UK Carrier Strike Group (CSG), as she stepped out of a helicopter onto the aircraft carrier at Portsmouth Naval Base.

The deployment will cover 26,000 miles over 28 weeks as it travels through the Mediterranean to the Red Sea into the Gulf of Aden to the Arabian Sea and Indian Ocean to the Philippine Sea.

Visits to 40 countries will be made, including to India, Japan, South Korea and Singapore.

More than 70 engagements will also take place, including sailing alongside the French carrier Charles De Gaulle in the Mediterranean.

The Queen had a chance to meet some of the 1,700 personnel on board the carrier, including Royal Navy sailors, Royal Air Force airmen and women, Royal Marines and 250 United States personnel.

The Queen appeared to be enjoying being shown around the ship on one of her first few engagements following the death of Prince Philip last month, and is said to be keen to recommence more public engagements in person.

Image: The ship was the Royal Navy’s Portsmouth base

She was able to go mask-free having had both her vaccine doses and a PCR test, as were all personnel as they have been in quarantine since the end of March, with nobody allowed to go on or off board since then, until the prime minister visited on Friday, having had a PCR and lateral flow test.

Engineering Technician Marine Engineering (ETME) Billie Matthews, 22, from County Durham, who was one of those who met the Queen, said: “It was brilliant, she was very chatty, very smiley.”

Able Seaman Chelsea Paterson, 24, from Chirnside, Scotland, said: “It was incredible, an honour to see her, let alone speak to her, the highlight of my career.”

This will be the HMS Queen Elizabeth’s maiden deployment and she will also have a squadron of 10 US Marine Corps F25B Lightning II jets onboard and be accompanied by the US destroyer USS The Sullivans and the Dutch frigate HNLMS Evertsen.

Image: The Queen on the ship’s flight deck

Defence Secretary Ben Wallace said the deployment “will be flying the flag for Global Britain – projecting our influence, signalling our power, engaging with our friends and reaffirming our commitment to addressing the security challenges of today and tomorrow”.

HMS Queen Elizabeth was expected to join the CSG in the Solent before departing but had to stop in Portsmouth after a major exercise off Scotland due to heavy winds.

She will join the other ships waiting at Devonport before sailing for the Mediterranean.

The deployment is part of the “UK’s tilt to the Indo-Pacific region” aiming to “bolster deep defence partnerships”, and to take part in an exercise to mark the 50th anniversary of the Five Powers Defence Agreement with Malaysia, Australia, New Zealand and Singapore.

It will be the largest number of helicopters assigned to a single UK Task Group in a decade.