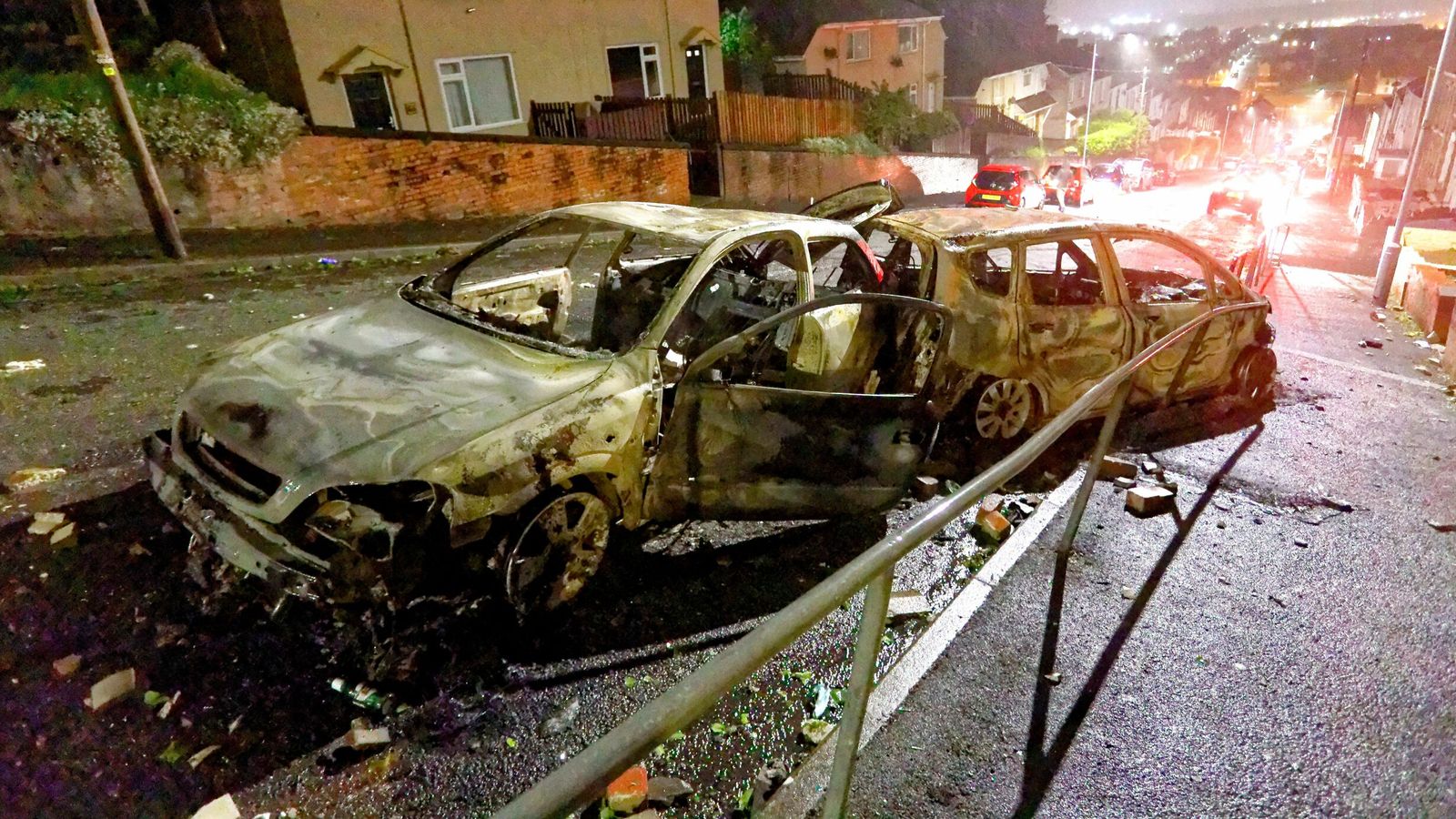 Four men and a teenage boy have been arrested after a vigil in Swansea descended into violence on Thursday.

South Wales Police has said officers will be “present and visible in the community over the coming days and weeks with further arrests expected”.

Home Secretary Priti Patel condemned the “disgraceful” scenes on Friday after rioters were filmed setting cars on fire in the middle of the road.

Crowds also cheered as a vehicle rolled backwards down a hill.

Officers suggested the incident in Waun-wen Road in the Mayhill area of the city began as a vigil to a local person who recently died.

Image: Two of the burned out cars in the Mayhill area of Swansea. Pic: Dimitris Legakis/Athena Pictures/Shutterstock

South Wales Police said in a statement on Saturday: “The local males aged 36, 20, 18 and 16 have been arrested on suspicion of unlawful violence and remain in police custody.

“There have been no further incidents of violence or disorder since Thursday night and increased patrols will continue over the weekend.

“Officers wish to thank those residents who have already come forward and provided witness statements and video footage. However, they are also appealing for more information.”

Image: Council contractors have since placed heavy concrete barriers in the area where the violence broke out

Detective Superintendent Gareth Morgan, who is leading the investigation, said: “There are many residents who were present at the scene during the disturbance and will no doubt know the identity of those who caused damage and threatened violence.

“I urge the public not to protect those who showed such disregard for the community of Mayhill and to give us the names of those who can been seen on social media footage.

“We have a dedicated team of detectives who are carrying out extensive inquiries to identify those involved and we are ready to act upon any information received.”

Ms Patel tweeted yesterday: “Absolutely disgraceful scenes in Swansea last night. My thoughts are with Mayhill residents who had to endure such shocking behaviour.”

She added: “Police have my backing to take robust action against those involved.”

Wales’s First Minister Mark Drakeford described the violence as “completely unacceptable” and said the disorder would “not be tolerated anywhere in Wales”.

UK borders to be ‘fully digital’ in an effort to measure immigration levels, home secretary to announce