Who is Sasha Johnson? The ‘fearless political campaigner’ who has faced ‘numerous death threats’ 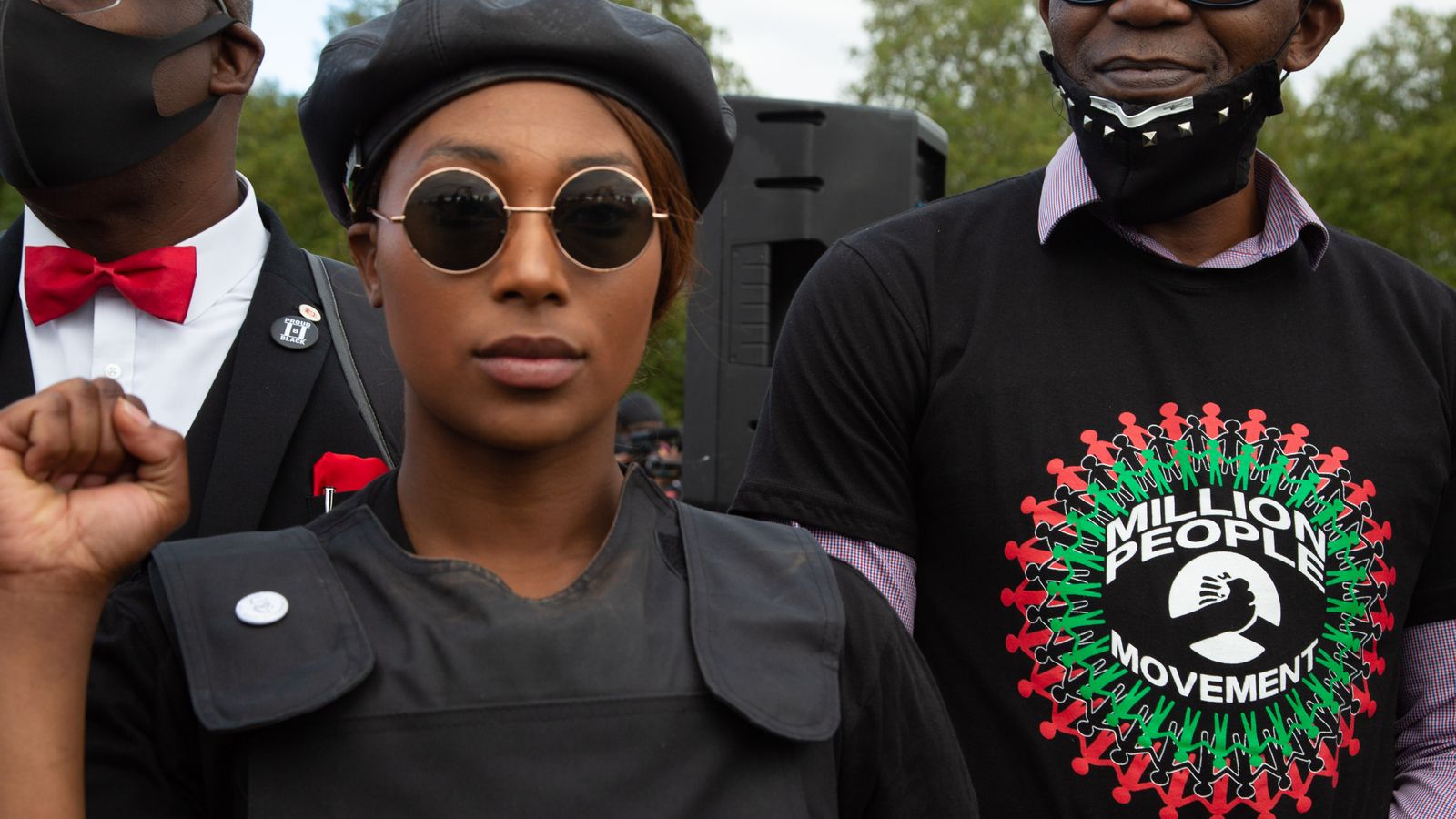 Sasha Johnson, the black equal rights activist who has been shot in the head, came to prominence last year after playing a leading role in anti-racism protests and speaking passionately about her strong political views.

The 27-year-old mother, who is critically injured in hospital, had faced “numerous death threats as a result of her activism”, according to the political party she represented, although police do not believe the shooting in south London was a targeted attack.

Black Lives Matter UK called Ms Johnson “a fearless political campaigner” and said she was “at the forefront of many BLM protests last summer”, which were sparked following the murder of George Floyd.

Image: Ms Johnson (centre) was ‘at the forefront of many BLM protests last summer’: Pic: AP

She was one of the organisers of the first-ever Million People March last August to protest against systemic racism in the UK.

During the demonstration, hundreds of people took to the streets of west London.

Ms Johnson is one of the leaders of the Taking The Initiative Party (TTIP), a political party that was registered with the Electoral Commission nearly four years ago and fielded its first candidates in May’s local elections.

According to the Mail On Sunday, Ms Johnson told supporters at the Million People March that the TTIP “will be the first black-led political party in the UK”.

However the activist reportedly added that the group was “not just a party for black people” and would also represent the working class.

According to its website, the party supports a “coalition leadership” and Ms Johnson is one of eight people on its executive leadership committee.

Her profile on the TTIP’s website states that Ms Johnson is an Oxford Brookes graduate with a first in social care and it suggests her methods of campaigning have not been universally supported.

“Although not everyone may agree with her methods, she is not afraid to stand up for what she believes in,” the profile states.

“She is also committed to feeding the homeless and has personally been involved in delivering food and groceries to families that are in need.”

It adds that Ms Johnson has “an immense passion for implementing change and justice and has been actively supporting the eradication of injustices in society by attending and leading protests”.

Outlining the TTIP’s manifesto in an interview with the Mail Online in December, Ms Johnson called for a national register of alleged racists that would ban them from living near people from ethnic minorities.

She reportedly told the publication: “It’s similar to the sex offenders register. If you were to be racially abusive to someone, [the register] would question whether someone is fit enough to hold a particular job where their bias could influence another person’s life.”

Image: Ms Johnson was one of the organisers of the Million People March in London

Ms Johnson has also reportedly called for reparations to be given to black people in the form of tax breaks due to the legacy of slavery, and has campaigned for statues linked to slavery to be removed.

Speaking to Sky News last year, Ms Johnson spoke passionately about the need to address racism in the UK following the murder of Mr Floyd in the US.

She said: “We’re no longer looking at one incident – we’re looking at the systemic structure that means that those incidents happen.

“It’s not just George Floyd who died, because we’ve lost many black people.”

Image: Ms Johnson (centre) has spoken passionately about the need to address racism in the UK. Pic: AP

She added: “The UK disassociates with racism but we have to remember the Windrush generation came here.

“When we’re funding war, to bomb other countries, and people are coming here for safety and rest, then we’re fleeing them away with our xenophobia.

“So we’re not disassociating from it. We’re saying, yes it’s here and we need to address it.

Following the shooting, TTIP described Ms Johnson as a “strong, powerful voice” who has “always been actively fighting for black people and the injustices that surround the black community”.