Raoul Moat: ‘Nobody knew what he would do next’ 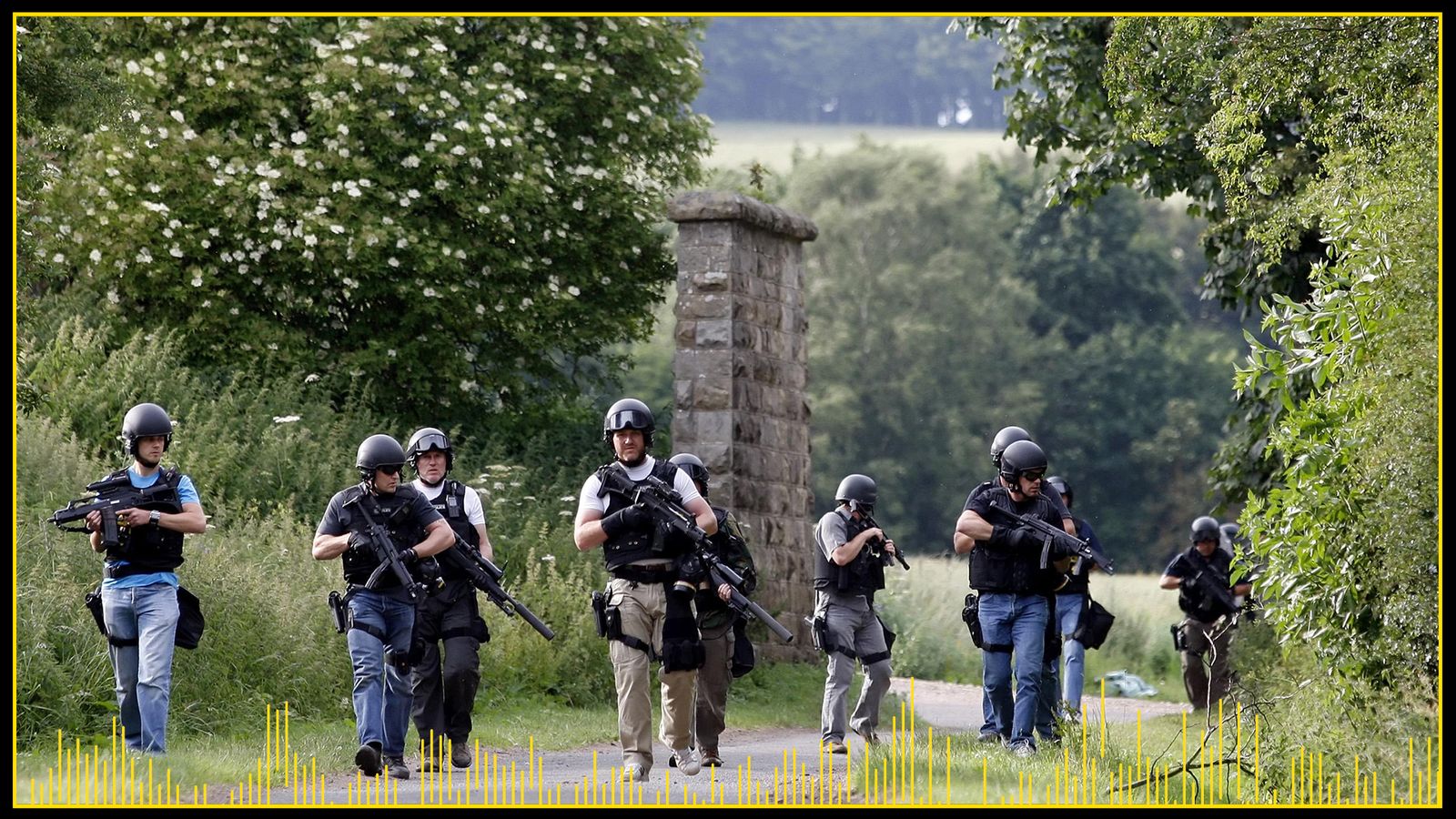 In July 2010, Sue Sim, Temporary Chief Constable of Northumbria Police, received a call in the middle of the night to say there had been a double shooting in a quiet suburb near Newcastle. The cat-and-mouse search for the gunman Raoul Moat involved specialist police units, snipers, RAF jets and played out live to a worldwide TV audience.

Ms Sim has shared her story in The Hunt For Raoul Moat, the second episode of StoryCast ’21 – a Sky News podcast series telling 21 extraordinary personal stories from some of the biggest news events of the century.

Sue Sim had been Temporary Chief Constable of Northumbria Police for just over three months when she received a call in the middle of the night to say two people had been shot in Birtley, Tyne and Wear.

Chris Brown, a 29-year-old karate instructor, had been shot dead in what was later described as an execution-style killing. His girlfriend Samantha Stobbart, 22, was badly injured.

Police said they were looking for a man named Raoul Thomas Moat.

As she pressed the telephone close to her ear and listened to the details of the case, Ms Sim thought she was dealing with a routine murder investigation.

The mother-of-two had no idea she was about to lead the biggest manhunt in UK history under the glare of national media attention.

Sharing her story during “The Hunt For Raoul Moat”, Ms Sim said: “I believed that what we had to do then was locate Raoul Moat, I did not in any way expect it to turn into the incident that it did.”

Moat had recently been in a relationship with Ms Stobbart but they had broken up while he was serving two months in prison for an assault charge.

It was shortly after his release when he targeted his former partner and her new lover, Mr Brown.

The former bouncer then went on the run before making a chilling 999 call where he threatened to kill police officers.

Ms Sim and Northumbria Police now faced the daunting challenge of protecting the public, and their own officers, from an elusive gunman who had killed before.

Ms Sim continued: “At that point nobody knew what Moat would do next, we had a gunman on the run… my biggest fear was not being able to bring Raoul Moat to justice.”

In the days that followed the hunt for Raoul Moat would captivate the nation.

Image: More than 200 armed officers were involved in the search

Broadcast channels from all over the country would descend on the quiet Northumbria village of Rothbury where he was believed to be hiding.

The UK had seen largescale manhunts before, but what made the Moat investigation so different was the sheer ​amount of resources pulled in to track him down.

The hunt involved police forces from all over the country – with more than 200 armed officers including sniper teams included in the effort.

Image: Heavily armed officers from around the country helped hunt down Raoul Moat

Helicopters were deployed, armoured anti-terrorist vehicles were brought in from Northern Ireland, and an RAF Tornado jet carried out reconnaissance work.

Sky correspondent Lisa Dowd, who covered the story, explains during The Hunt For Raoul Moat: “It seemed like police were assembling a small army in the most unusual of places. Reinforcements came in from all over the country – 250 of them were armed.”

The celebrity survivalist Ray Mears was brought in to try to track Moat’s movements in the forest.

Image: Sue Sim was new to her role when she found herself leading the biggest manhunt in UK history

The story took an even more bizarre turn when the troubled former footballer Paul Gascoigne turned up in Rothbury with chicken, beer and a fishing rod.

Gazza, as he is affectionately known, claimed he was on old friend of Moat’s and wanted to “save him”.

As the hunt for Moat went on for nearly a week, the questions remained – where was he hiding? Would he kill again? Would he turn himself in or would he come to a bloody end?

Now, Sue Sim and Lisa Dowd have come together to give their first-hand accounts of the manhunt in episode two of StoryCast ’21.