‘Are you the prince?’: A case of mistaken identity for Duchess Kate on Scottish eco factfinding trip 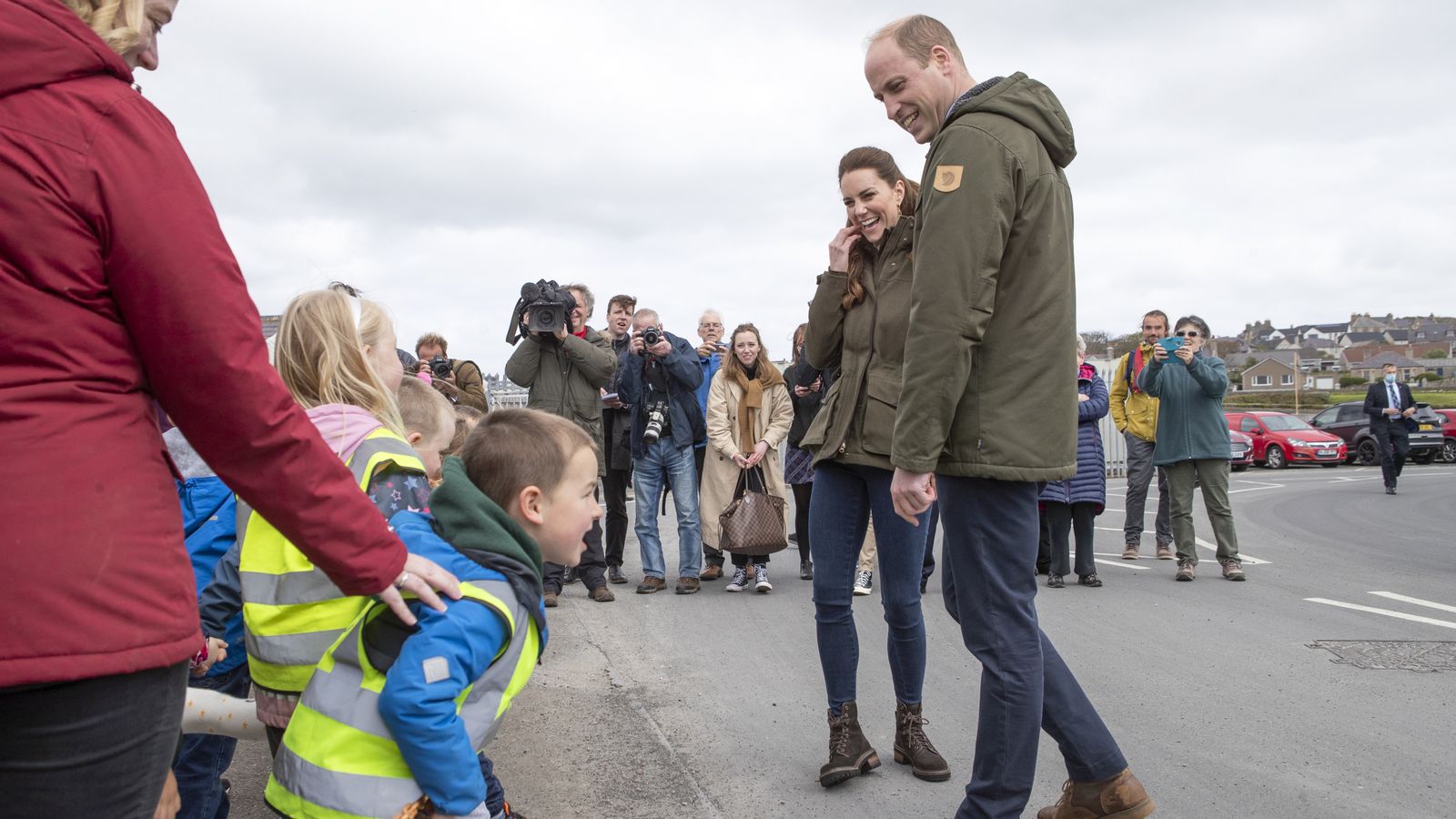 The Duke and Duchess of Cambridge have ventured onto the waters off the Orkney Islands to learn how they are harnessing the power of the sea to help combat the climate crisis.

On their first ever trip to the islands William and Kate travelled by boat to see the world’s largest floating tidal energy turbine, the 2MW ‘O2’, as part of their week-long visit to Scotland.

Afterwards the couple – among the most famous people in the world – chatted to a group of nursery-school children where one little boy struggled to identify Kate, asking her “are you the prince?”

Image: The couple are aiming to visit innovative projects that are positively changing the dial on climate change ahead of the COP26 climate summit

Without missing a beat, and retaining the composure she has become known for, Kate replied: “No, I’m the Duchess of Cambridge” adding “lots of people call me Catherine”.

The duke and duchess had been ferried by a Royal Navy vessel half a mile off the coast of the Orkney Islands to see the vast 680-tonne machine, which can generate enough electricity to power 2,000 homes and is undergoing testing.

As a mark of good luck the couple poured Scapa Whisky over its two 20-metre long rotor blades and ventured inside the 72-metre long Orbital O2.

Image: The pair arrive to officially open The Balfour, Orkney Hospital in Kirkwall

Since 2003, the European Marine Energy Centre (EMEC) has been based on Orkney, and is the only accredited wave and tidal test centre for marine renewable energy in the world.

Teams from across the globe come to test their new machines in the extreme conditions around the islands.

The royal couple had wanted to visit, to draw attention to the ground-breaking work taking place in Orkney to help lead the renewable energy revolution.

Neil Kermode, managing director of EMEC, said: “It is absolutely world-leading. Yes these are a world first.

“The turbine is the world’s largest. Its sister version was a couple of years ago generating 7% of Orkney’s electricity.

“Nobody has been near that anywhere in the world.”

Image: The Cambridges are known by their Scottish title the Earl and Countess of Strathearn when north of the border

The Duke and Duchess also visited the fuel cell and hydrogen storage trailers at Kirkwall Pier.

EMEC is pioneering the development of a green hydrogen economy in Orkney, having generated the worlds first tidal powered hydrogen in 2017.

On Orkney it also produces more energy than the grid can store and hydrogen production is one way of preventing it from going to waste.

Now researchers, developers and Orcadian’s are working on ideas to use the hydrogen as fuel.

Projects include ferry and aviation transport, as well as distilling for whisky and gin.

Stephen Kemp, managing directory of the Orkney distillery, wants to use hydrogen in his business.

He told Sky News: “We would like to expand the distilling operation to become a whisky distillery but it seems so perverse to ship in kerosene to burn to create heat when we literally have too much energy.

“Why can’t we develop something local that works and develops a real local practical use for locally generated renewable energy?”

But as well as long term projects there is also a push for action now.

The ReFLEX Orkney project is aiming to develop an integrated energy system, giving advice to homeowners and businesses on how they can use renewable energy sources in their homes and how they travel.

Already, Orkney has three times more electric vehicles per capita than the rest of the UK, and there are more than 700 individual energy generators such as wind turbines in people’s gardens and solar panel installation’s on their homes.

Gareth Davies from Reflex, told Sky News that Orkney is gaining an international reputation for their ideas, advising organisations in places like Singapore, South America and Indonesia.

He said: “Since 2013 we’ve had 100% of our electricity coming from renewable energy. So, that’s seven to eight years now that we’ve been like that, and what people are now doing is trying to think of ways they can get it introduced into their own households, into their business activities as well.”

Ahead of COP26, the climate conference which will be taking place in Glasgow later this year, the Duke and Duchess are aiming to visit innovative projects that are positively changing the dial on climate change.

At the end of the year the winners of the first Earthshot Prizes will also be announced. The Nobel-style award, with a £50 million prize fund over ten years, was announced by Prince William at the end of last year, aimed at adding some positivity into the climate crisis debate.

During their time in Orkney the couple also thanked medical staff for their efforts during the pandemic as they officially opened the islands’ £65 million Balfour Hospital.

They were greeted with cheers and rounds of applause from well-wishers and nurses.

The couple are making an extensive tour of Scotland in William’s role as Lord High Commissioner to the General Assembly of the Church of Scotland.

The Cambridges are known by their Scottish title the Earl and Countess of Strathearn when north of the border, and Kate wore a Strathearn tartan scarf and a coat by Massimo Dutti for the visit.

Hosted by Anna Jones, it will follow Sky News correspondents as they investigate how global warming is changing our landscape and how we all live our lives.