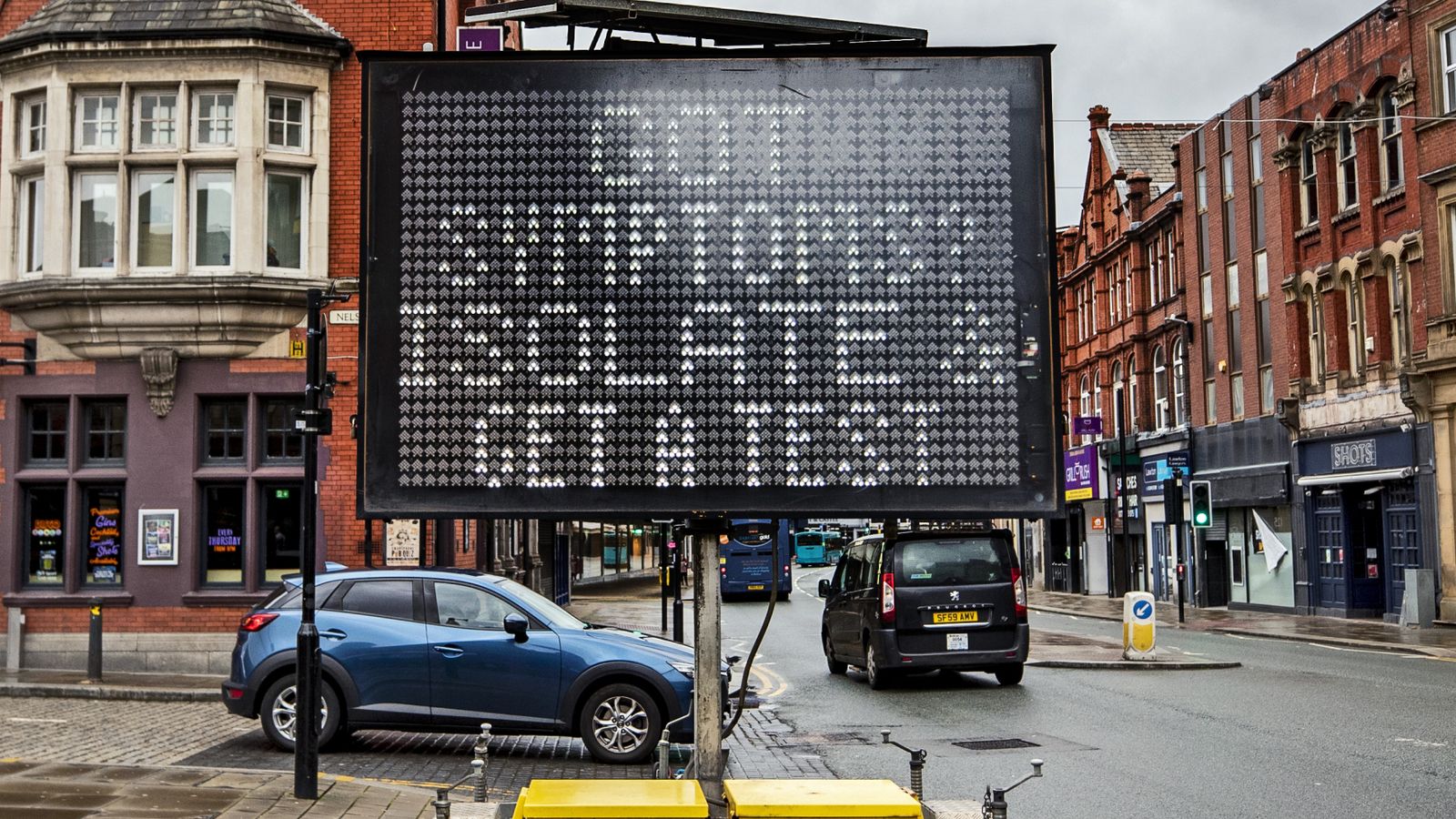 The number of cases of the Indian COVID variant in England has more than doubled since last week – rising by 3,535 to 6,959, according to official figures.

Health Secretary Matt Hancock said the variant is spreading and the latest estimates show it makes up more than half – and possibly as many as three-quarters – of all new COVID cases.

The B.1.617.2 variant of concern, which is believed to be more transmissible than the Kent variant which became dominant in the country after Christmas, has resulted in surge testing and vaccinations in numerous areas.

Image: A display board advertises testing services in Bolton, one of the areas said to be worst affected by the Indian variant

Live updates on COVID-19 in UK and around the world

“And the latest estimates are that more than half and potentially as many as three quarters of all new cases are now of this variant.

“As we set out our roadmap, we always expected cases to rise. We must remain vigilant.”

Public Health England (PHE) data shows that the most affected areas continue to be Bolton, Bedford, and Blackburn with Darwen, which have seen 1,354, 366 and 361 confirmed cases, respectively.

The health secretary said, in the last week, 17,140 doses of vaccine have been given out in Bolton, and congratulated the people of the Greater Manchester town, describing the response there as “a model for how we can tackle it without having to resort to a local lockdown”.

Case rates in Bolton have been surging since the start of the month, but they’ve stalled at around 450 cases per 100,000 for the last three days.

According to the latest PHE data, the vast majority of people infected with the Indian variant are unvaccinated.

Of 5,599 cases of the variant since 1 February 2021, 3,367 infected people hadn’t had a single dose. Just 177 of the cases were in people who were fully vaccinated with both doses.

Unvaccinated individuals accounted for 29 of 43 hospital admissions. Just one was fully vaccinated and eight of the 12 deaths were in unvaccinated people.

Earlier, Mr Hancock said the link between COVID-19 cases, hospital admissions and deaths was being “severed” but it was too early to say whether the 21 June lifting of social restrictions would go ahead.

Mr Hancock, who has faced scathing criticism from Dominic Cummings over his handling of the pandemic, told MPs that Wednesday’s figure of 3,180 new cases of coronavirus may have been “the highest since 12 April” but vaccines were working.

That figure has since been surpassed, with the UK today reporting a further 3,542 cases of the disease and 10 new deaths within 28 days of a positive COVID-19 test.

Responding to the health secretary’s acknowledgement that up to 75% of the COVID cases in the country are due to the Indian variant, Labour’s shadow home secretary Nick Thomas-Symonds MP said it confirmed “the terrible consequence of the Conservatives’ reckless refusal to secure our borders against COVID”.

In Wednesday, former senior scientific adviser to the government Neil Ferguson said it could be another “two to three weeks” before it’s clear whether the final step in lifting lockdown can safely go ahead.

Dr Jennie Harries, chief executive of the UK Health Security Agency, told the news conference it was hanging in the balance.

She said: “I think it is really, really just on the cusp at the moment. If we see cases rise, we’re not clear yet quite whether that is a rise in the variant cases taking off or whether it’s actually a rise because we are actively, quite rightly, detecting them and challenging these chains of transmission.“

The final stage of the lockdown easing, which is pegged for 21 June, is critical for those in the arts, sport and hospitality industries, who are hoping their sectors can begin to return to normal.

On Tuesday, Sky News analysis found that 121 local authority areas in England had seen a rise in growth rates for the Indian coronavirus variant of concern. Many of the updated figures are published in the table above, but are not as thorough as the figures from two days ago.

The rise in cases of the Indian variant has led to travel restrictions being imposed on Britons wanting to go abroad, with France introducing mandatory quarantine for people arriving from the UK and other countries imposing other measures.

A surge in cases in some areas led to confusion among eight local authorities which, over the weekend, found government guidance had been issued advising against travel across their boundaries.

The uncertainty created by the extra guidance – which many of the authorities said they were not aware of – forced the government to change its advice for residents, telling them to minimise travel in and out of affected areas.