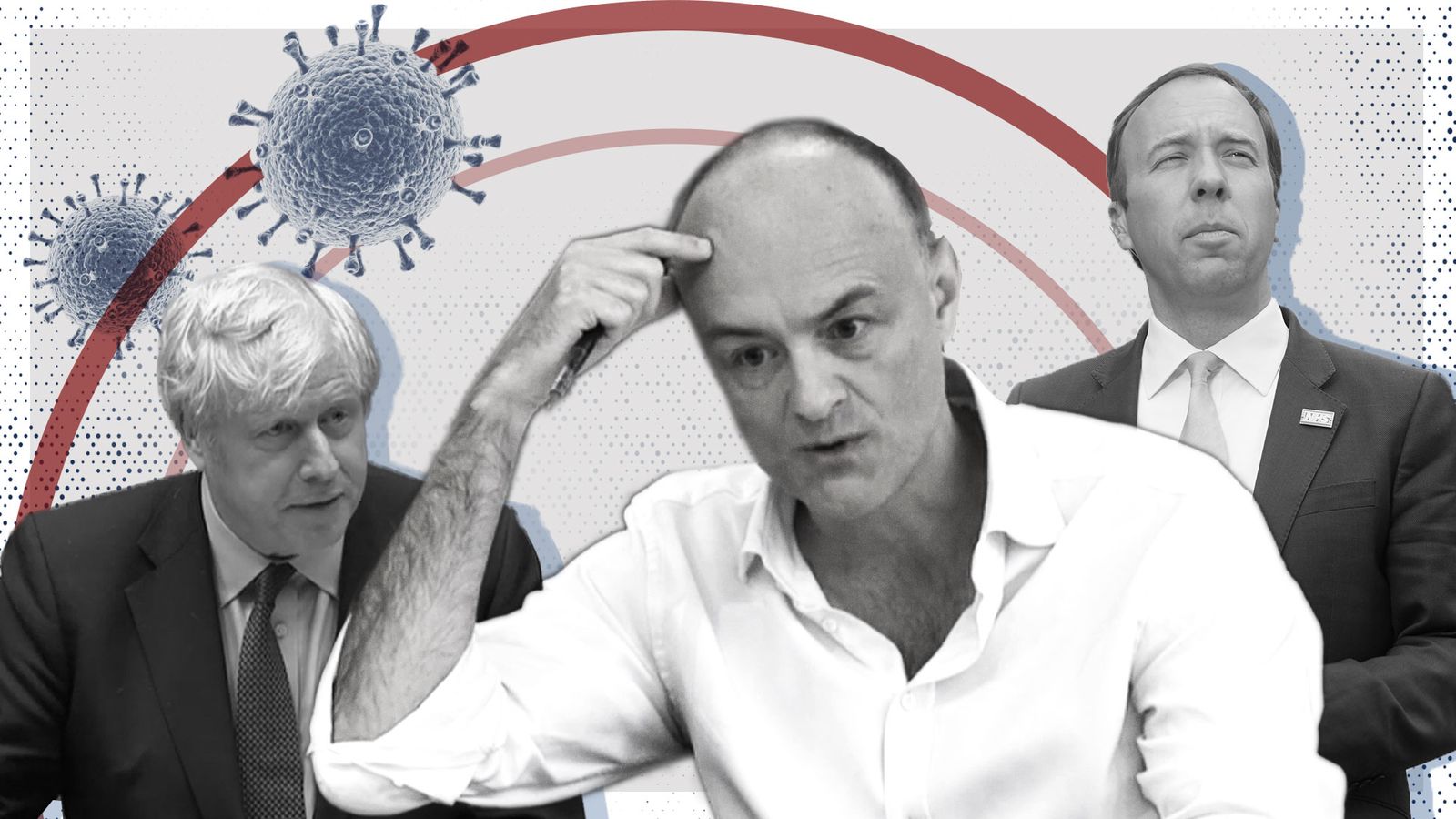 Tens of thousands of people died unnecessarily because of the government’s failings over coronavirus and Boris Johnson was “unfit for the job” of prime minister, Dominic Cummings has said.

The PM’s former top adviser claimed Mr Johnson thought COVID was a “scare story” like swine flu in the early days of the pandemic – and did not hold back in attacking Health Secretary Matt Hancock.

In an explosive Commons hearing on coronavirus lasting more than seven hours, Mr Cummings has told MPs that the government failed the public in the early months of 2020.

‘The health secretary should have been fired’

Explaining why Mr Johnson did not attend the COBRA meetings at the start of last year, he said: “The prime minister described it as the new swine flu, I certainly told him it wasn’t.

“The view from No 10 was if the PM chairs COBRA and says it’s just swine flu that would not help.”

He added that the PM wanted to be injected with the coronavirus live on TV by chief medical officer Chris Whitty to show it was not harmful.

Mr Cummings spoke of how many junior people in government “did great things” but were let down by those in senior positions, adding: “The problem in this crisis was lions led by donkeys over and over again.”

Matt Hancock took much of Mr Cummings’ flak, claiming that he, the cabinet secretary and other senior officials called for the PM to fire the health secretary for “at least 15-20 things, including lying to everybody on multiple occasions in many meetings”.

Mr Cummings said the PM “was close” to firing Mr Hancock in April 2020 “but wouldn’t do it”.

He added that Mr Hancock took too long to get test and trace set up and told the PM: “If we don’t fire the secretary of state and we don’t get testing into someone’s hands, we are going to kill lots of people.”

Mr Hancock has rejected Mr Cummings’ claims with a spokesman for the health secretary saying he “has worked incredibly hard in unprecedented circumstances to protect the NHS and save lives”.

• Chancellor Rishi Sunak supported locking down (and never threatened to quit over the second lockdown), it was the PM who did not think the pandemic “was the big danger”

• “It is crazy I should have been in such a senior position, I’m not smart, I’ve not built great things in the world – neither is the PM” – and he said he and the PM let down brilliant junior colleagues

• Plan A was herd immunity by September after one peak but after it was modelled 260,000 would die, or more, that was changed

• When the PM got COVID, Mr Cummings said: “In lots of ways, the whole core of government fundamentally fell apart.”

• Then-deputy cabinet secretary Helen MacNamara walked into a meeting with Mr Cummings and other officials on 13 March 2020 and said: “I’ve been told for years that there’s a whole plan for this, there is not plan, we’re in huge trouble.

“I think we’re absolutely f****d and we’re going to kill thousands of people.”

• On telling the PM he was going to resign in December 2020, Mr Cummings claimed the PM told him: “You’re right, I am more frightened of you having the power to stop the chaos than I am of the chaos, chaos isn’t that bad because chaos means that everyone has to look to me to see who’s in charge.”

• On Mr Hancock saying people would be tested before they returned to care homes and there was a shield around care homes, Mr Cummings said he lied and said: “Quite the opposite, complete nonsense – we sent people with COVID back to care homes”

• On whether or not to sack Mr Hancock, Mr Cummings said the PM was told: “Don’t sack him now, he’s the person you sack when the inquiry comes along.”

PM embraced chaos as ‘people would look to him’

• He did not quit when he considered doing so in the summer because people urged him not to and: “Fundamentally I regarded [Johnson] unfit for the job and I was trying to create a structure around him to stop extremely bad decisions.”

• He made the trip to Durham to get his family out of London following death threats and a gang outside his house, where his wife and son, aged three, were saying they were going to kill everyone in the house – he said it was a mistake to leave out that crucial part of the explanation

• He said it was logical at the time to go for a 30 mile drive to Barnard Castle to see if he could cope with driving 300 miles to Westminster, and had been writing his will in bed a few days before because he thought he was going to die.

“I wish I’d never heard of Barnard Castle and I’d never have gone, and I can only apologise,” he added

• After March, the PM thought the UK should not have gone into lockdown and should have focused on the economy – “I thought that perspective was completely mad”.

• Mr Cummings said: “Fundamentally the prime minister and I do not agree about COVID. I had very little influence on COVID stuff, I mean I tried, I made arguments, but as you can see on pretty much all the major arguments basically lost.”

• Asked if he is surprised about the chaos over the current travel traffic light system, he said: “No, it’s deja vu all over again.”

• His departure was inevitable in September, but Mr Johnson’s girlfriend Carrie Symonds was something to do with it as she tried to change “a whole bunch of different appointments”, was appointing her friends to jobs, was overturning the hiring process of one job, which was “unethical and clearly illegal”. The PM’s behaviour was “appalling”, he said

• Asked if he thinks the PM is a fit and proper person to get us through the pandemic, Mr Cummings said: “No.”

Cummings apology: ‘We failed the public’

At the start of the session, Mr Cummings said the government failed the public when they needed it most, and apologised to the families of those who died in the early days of the pandemic.

Taking some of the blame himself, he said: “The truth is, senior minister, officials, advisers like me fell disastrously short of standards required by the public.

“When the public needed us the most, the government failed. I want to apologise to all those families who had people that died.

“I did think oh my god, is this what people have been warning about all this time?

“However, PHE, WHO, CDC, organisations across the western world were not ringing the alarm bells about it then.

“In retrospect, it’s completely obvious that many institutions failed.”

At the end of the hearing, Jeremy Hunt and Greg Clark, who chair the select committees that questioned Mr Cummings, said: “As part of our joint parliamentary inquiry into lessons learnt from the government’s response to the pandemic, it has been important to hear about decisions taken by Downing Street at the outset to deal with the threat from COVID-19.

“We will review the evidence given by Dominic Cummings today and will publish relevant documents we accept as evidence in due course.

“Secretary of State Matt Hancock will appear before us next month when we will have a further opportunity to explore steps taken by Ministers and the outcomes.”