Friends reunion: Real-life romance, injuries, and the chances of a revival 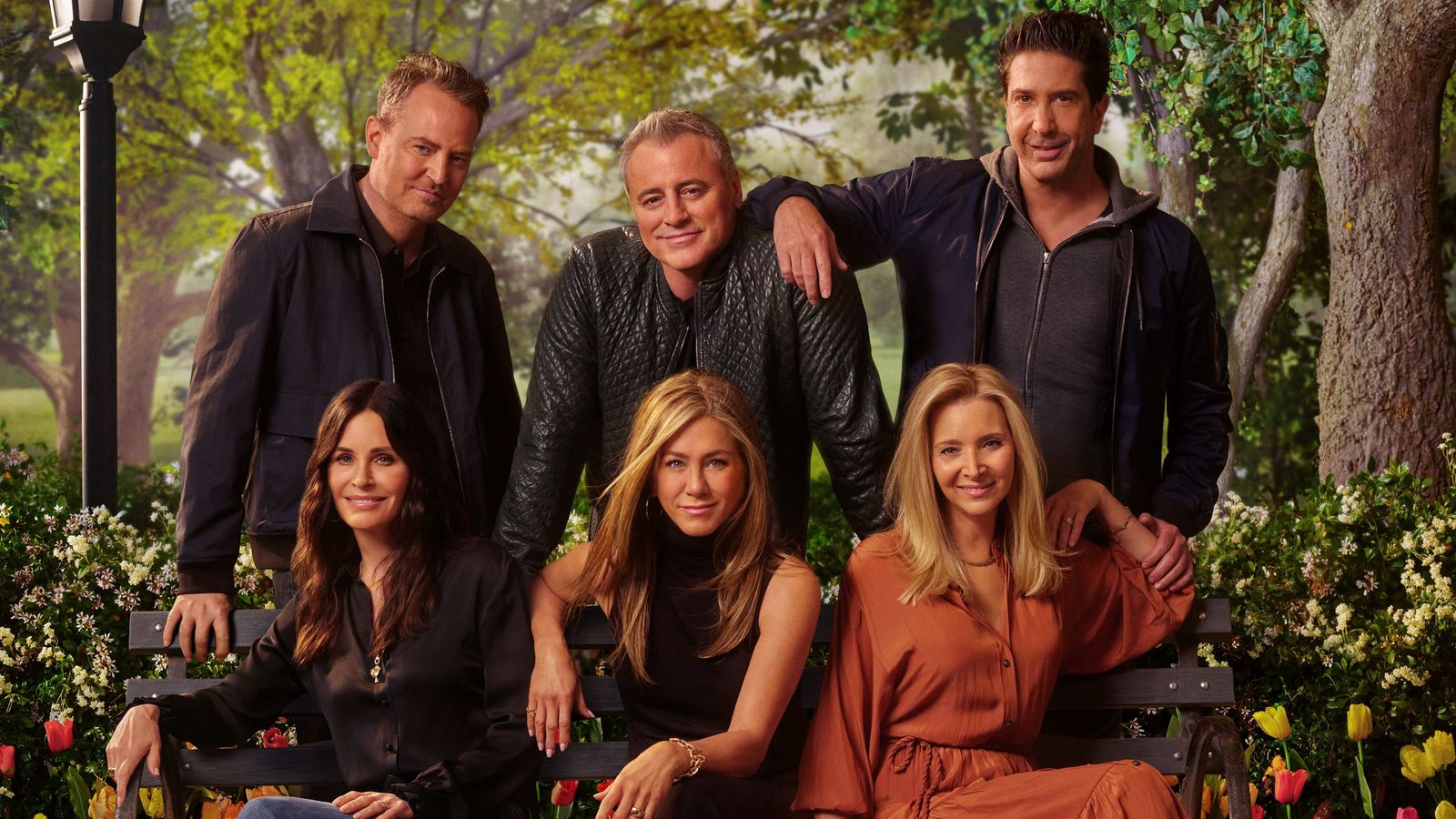 WARNING – THIS ARTICLE CONTAINS SPOILERS FOR FRIENDS: THE REUNION

Friends might have finished 17 years ago, but it’s the show that has never gone away. In fact, you are probably never more than 20 minutes away from a Friends repeat on TV somewhere in the world.

Now, Friends: The Reunion is here and, as if you needed another reminder, this is the first time all six cast members have been on screen together since the finale aired in 2004.

So what happened when the stars – Jennifer Aniston, Courteney Cox, Lisa Kudrow, Matt LeBlanc, Matthew Perry and David Schwimmer – got back together? Here are 17 key moments and things we learned from the much-anticipated reunion special.

Image: Jennifer Aniston and David Schwimmer as Ross and Rachel in the last ever episode

While the show was all about the nostalgia, there was one big reveal which is sure to grab headlines: Aniston and Schwimmer admitted they were “crushing hard” on each other during the early days of Friends but that the timing was never quite right.

Cynics might say it seems almost unbelievable that this juicy gossip has never been revealed before, but who cares – this is Aniston and Schwimmer sharing details of sofa cuddles during filming breaks, and the tension building up to their first on-screen kiss. He really was her lobster, until she married Brad Pitt that is.

Courteney Cox used to write her lines on Monica’s table

Barely five minutes in, LeBlanc was dobbing Cox in, asking if her lines are still written on the table in Monica’s apartment.

“Before we shot that, I erased it all,” he tells Kudrow and Aniston, speaking about a particular scene before Cox’s arrival, and then announces she would often keep a script in the sink.

“That’s so mean!” Cox exclaims when he tells her, although we’ll forgive him because at this point she’s emotional at seeing her former co-stars and he’s wiping away her tears, and it’s all very heartwarming.

They cry a lot

Cox isn’t the only one, with Aniston asking for the tissue box almost as soon as she arrives on set, and Perry getting emotional later in the show. Plus, we see the tears that came after they wrapped the finale.

Well, Friends was their lives for 10 years, this was always going to be emotional – although not quite Bruce Willis as Elizabeth’s dad levels of emotional, thankfully.

“We stay in touch, for sure,” Kudrow tells host James Corden. “Maybe not every day. But we have such a bond from having done this show and forged this very tight relationship that, you know, any time you text or call someone, they’re gonna pick up. They’ll be there.”

Later in the show, Perry echoes the sentiment: “The best way that I can describe it is, after the show was over, at a party or any kind of social gathering if one of us bumped into each other that was it, that was the end of the night, you just sat with the person all night long. That was it. You apologised to the people you were with, but they had to understand that you had met somebody special to you and you were going to talk to that person for the rest of the night.”

Corden reveals some figures for the stats fans: some 236 episodes of Friends were made over 10 years, with the show airing in over 220 territories.

Globally it was TV’s number one comedy for six straight seasons, averaging 25 million viewers a week – and 52 million people watched the finale. Now, 17 years after it ended, Friends has been watched over 100 billion times across all platforms.

You don’t even need to work as a transponster to know those are big numbers.

Rachel was the hardest part to cast

Friends creators Kevin S Bright, Marta Kauffman and David Crane also feature in the show, revealing details about decisions on storylines. They also discuss casting their six stars, saying they had to persuade Schwimmer from quitting TV to take the role – they had written the part of Ross with him in mind, so it’s lucky he agreed.

Cox was originally in the running for Rachel, but persuaded them she was more of a Monica. Rachel was the hardest and last part to cast, we hear, because the character can be selfish and self-involved. “In the wrong hands, you don’t like Rachel.”

Aniston, an actress with a “graveyard of failed pilots” behind her, turned out to do likeable very well.

The night before his audition, the actor got drunk, tripped over and took a “chunk of meat” off his nose. When asked by Kauffman what had happened to his face, he fessed up, and got the part.

But it wasn’t his only Friends-related injury. Shooting for The One Where No One’s Ready, one of the show’s most popular episodes, he had to go to hospital after injuring his shoulder jumping on to a chair. They then had to write his sling into the show, creating a storyline in which he injured himself jumping on his bed.

Before shooting The One Where No One’s Ready, it was the one time they had not done a Friends “huddle” beforehand – so superstitious LeBlanc made sure they never left it out again.

Recreating the famous quiz that saw Monica and Rachel lose their apartment to Joey and Chandler in season four, Tom Selleck (aka Dr Richard Burke) arrives to ask the bonus question that became their downfall all those years ago: what does Chandler do for a living?

Transponster isn’t even a word, Cox reminds us, before Burke reveals the answer is that “nobody knows, really”.

The point goes to the girls, which means they get to win this time round.

Asked by an audience member if there was anything they didn’t like on set, the expectation was for the stars to say they loved everything and what a joy it all was. But Schwimmer and LeBlanc were emphatic: “The monkey.”

“The monkey scared me,” piped up Cox. He has got a name you know, guys.

Recap: Ross had a pet monkey, Marcel, in the earlier episodes of Friends.

After clarifying his love of animals, Schwimmer went on to say “the monkey” often “didn’t get it right”, leading to retakes, and would eat live grubs on his shoulder when the cameras stopped rolling.

They WERE on a break

Asked for a simple yes or no to the issue that sparked Rachel’s 18-page letter – FRONT AND BACK – Corden asks if Ross and Rachel really were on a break when he slept with Chloe the copy girl.

Even Aniston says yes, so that’s that sorted.

Lady Gaga was inspired by Phoebe

All this was interesting enough if a little bizarre, but Lady Gaga’s appearance struck a chord. Joining Lisa Kudrow for a rendition of Smelly Cat, and wearing a distinctly Buffay-esque outfit, the singer finished by thanking Phoebe for showing it is okay to be different. “Thank you for carrying it along,” Kudrow replies.

He was Monica and Rachel’s impatient neighbour, whose incredible seashell lamp Rachel inherited after his death. And yet, they can’t remember his name.

Mr Winkle, Mr Henkel and Mr Wriggles are the answers given by Aniston, Cox and Kudrow when asked to identify him from his voice in Ross’s quiz. Rude.

Witherspoon, who went on to become an Oscar-winning megastar, starred as Jill, one of Rachel’s spoiled sisters, in two episodes in 2000, and she was one of many female stars who caught Joey’s eye.

“One of the most exciting things was I got to be in this scene where I’m in the apartment and Joey walks in and he goes…” Cut to Joey: “How you doin’?”

“It was this iconic line and I was just so excited,” Witherspoon says. “To watch a famous character say his famous line… come on!”

Monica and Chandler’s parents Jack and Judy Geller (Elliot Gould and Christina Pickles) were like mum and dad to everyone.

Image: The Friends stars were reunited in front of the famous fountain from the opening credits. Pic: Warner Media/ HBO/ Sky UK

Being funny took its toll on Matthew Perry

Perry’s struggles with addiction have been well documented in the past. While there was no mention of this in what was for the vast majority a happy, laughter-filled reunion show, the actor did start to touch on mental health at one point.

Speaking about performing in front of a live audience, he admitted he would feel he was “going to die if they didn’t laugh”, which was “not healthy, for sure”. He would “sweat” and “freak out” when people didn’t laugh, he says, and “felt like that every single night”.

It’s the closest the show comes to touching on the difficult sides of fame and being part of such a hugely successful show, but didn’t elaborate any further.

Monica and Chandler stayed together because of the live audience

The initial plan was for the pair to sleep together in London and for it to be a brief dalliance. But when Monica popped up from under the duvet, the audience “went insane” and the writers knew they had to keep it going.

“It was such a powerful moment that we knew we had to explore it more,” says Kauffman, and the secret romance led to some of the show’s most memorable scenes – not least Phoebe’s “My eyes!” discovery and later her attempts to flirt a confession out of Chandler.

‘We were always there for each other’

Don’t get your hopes up for a Friends revival

It’s the $64,000 question (or more likely $2.5 million if reports of the figures received by each of the stars to appear in the reunion are to be believed): would they ever consider reuniting for an actual catch-up episode, or even a film?

Kudrow sounds pretty definite. It would be up to the show’s writers, she says, but agrees with them that they ended in the best possible way, with Monica and Chandler moving home with their adopted twin babies, and Ross and Rachel finally back together.

“I don’t want anyone’s happiness to be unravelled,” she says. Plus, Kudrow reckons she’s too old to act “floopy” now.

So fans for now will have to make do with the re-runs, and it looks like they’re here to stay.