Champions League Final: As thousands of Britons fly to watch Chelsea v Man City, the Portuguese city of Porto is taking a risk 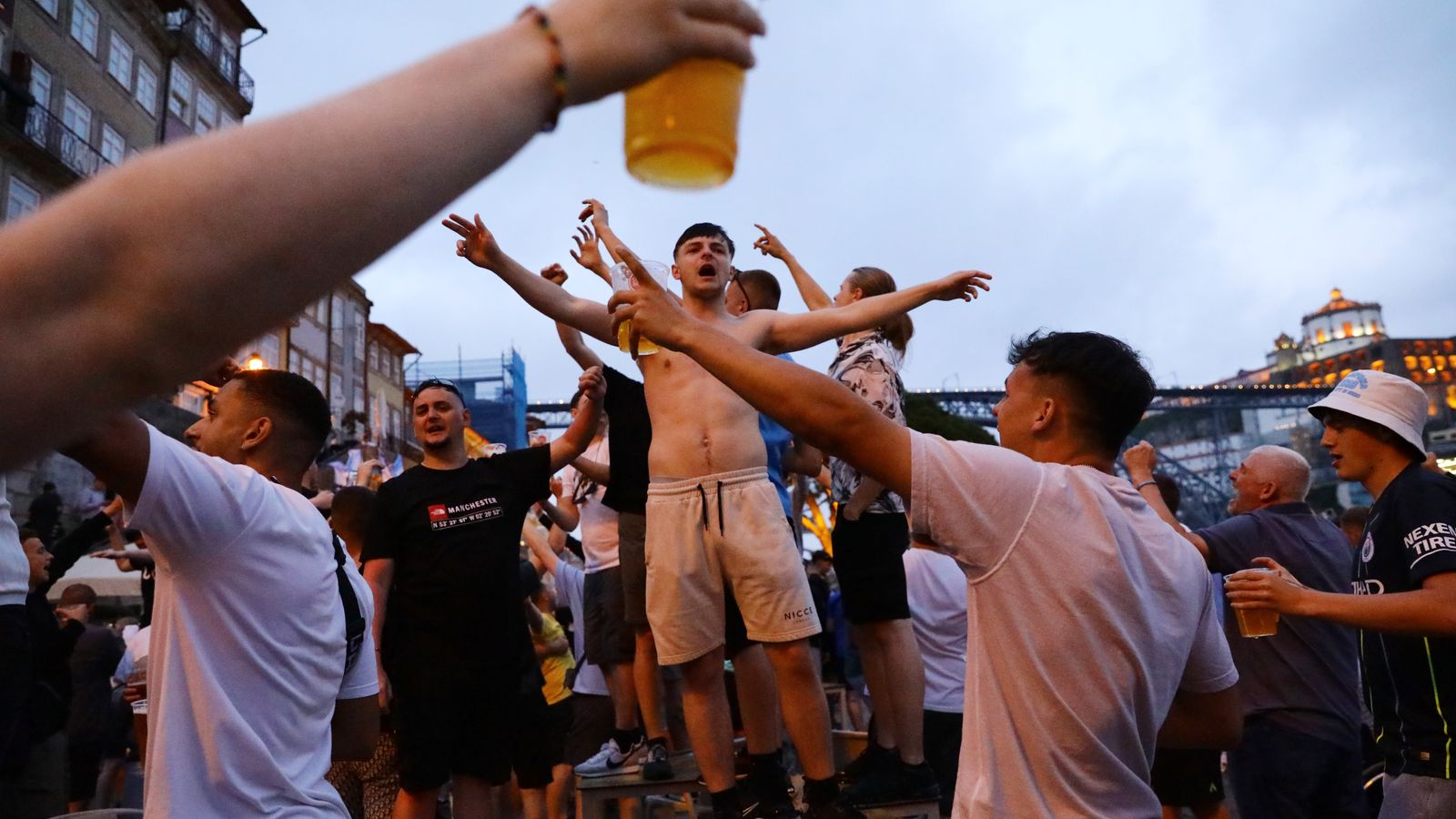 In Porto’s Ribeira Square, the unmistakable sight and sound of English football fans abroad has returned.

Singing, swilling inexpensive local beer and standing on chairs, they have commandeered a pretty corner of this coastal city.

There are 12,000 ticket holders from Chelsea and Manchester City arriving over the weekend and many more have travelled in the hope of getting one, representing the biggest mass departure from the UK since before the pandemic.

Image: It is the biggest mass departure from the UK since before the pandemic Image: British fans have arrived in Porto for Manchester City vs Chelsea

“It doesn’t seem like COVID’s here at all,” said one Chelsea fan, who had taken his top off, skin reddening in the sunshine.

A Manchester City supporter agreed: “This is a bit of normality. I’d urge anyone to fly out for their holidays – it’s so great to see the sunshine.”

Relations between rival supporters remained mostly good-natured throughout the day but police had to intervene on at least two occasions to prevent a fight breaking out.

Portugal stepped in just three weeks ago to host the Champions League final, which was originally slated for Istanbul. Because the country is on the UK government’s travel green list, fans avoid quarantine in both directions if they have a COVID-19 PCR test before departure and on their return.

But still, this city is taking a risk.

Image: Relations between supporters remained mostly good-natured but police had to intervene on at least two occasions

Two weeks ago, huge crowds gathered to celebrate Sporting Lisbon winning the title, with some experts suggesting this led to a rise in virus cases in the area.

With the Indian variant rising in the UK, some in Porto believe the government is taking an unnecessary risk by encouraging so many fans to travel here, potentially spreading the virus.

But the mayor, Rui Moreira, said it is a risk worth taking.

“This is the sort of moment that will put the city in limelight,” he said.

“I was speaking to a taxi driver this morning and he was saying it finally feels normal again. The cafes are full, the restaurants are full, people are enjoying themselves. We really need to start going again, because even in the last month we have been a little bit too defensive.

“Let’s face it, all the elderly people have been vaccinated, all the sick people are now protected. We do need to take some risks and now is the time to start again.”

With match tickets costing up to £500 and airlines and hotels putting up their prices, many supporters have saved for months expecting to make this trip.

“We’ve jumped through so many hoops to get here but we’d jump through lots more to see Man City in a Champions League final,” he said.

“We flew to Lisbon when we heard the match was going to be in Portugal. We picked the wrong city but just took a three-hour train to get here. We’re old enough to have watched City go through the rough parts so we weren’t going to miss this.”

Chelsea fan Les Gregory said: “I’ve been going to watch Chelsea abroad since 1975, it’s in the blood. The COVID tests to get here and back have cost us a fortune but we’re here now and the weather is good and the beer is cheap and I love to travel so it’s all good.”

Image: Chelsea’s head coach Thomas Tuchel is looking for his first trophy since arriving in England

For Manchester City’s manager Pep Guardiola, the final presents a chance to crown a reputation already cemented as the most influential manager of a generation.

“We will not have 90 minutes where one side dominates,” he said.

“We are going to suffer but when we get momentum we will have to use it. I’m the happiest man in the world to be here. It is a privilege. We will try our best and (it is) a good advertisement for football.”

Chelsea are the slight underdogs, despite having beaten City twice this season in the FA Cup and Premier League.

Manager Thomas Tuchel tried to bring some levity while addressing his squad by doing an impression of his opposite number, Guardiola, until he spotted the camera watching.

“It is not just me against him,” said Tuchel. “We are not playing tennis tomorrow. It is always tough to play against City when Pep is on the sideline. They have huge belief and success and continuous winning mentality.”

Last year the Champions League trophy was lifted in empty stands. This time, 16,500 football fans will be inside the Estadio do Dragao. But the joy of having them back is tempered by a fear among some locals that their safety is being put at risk.