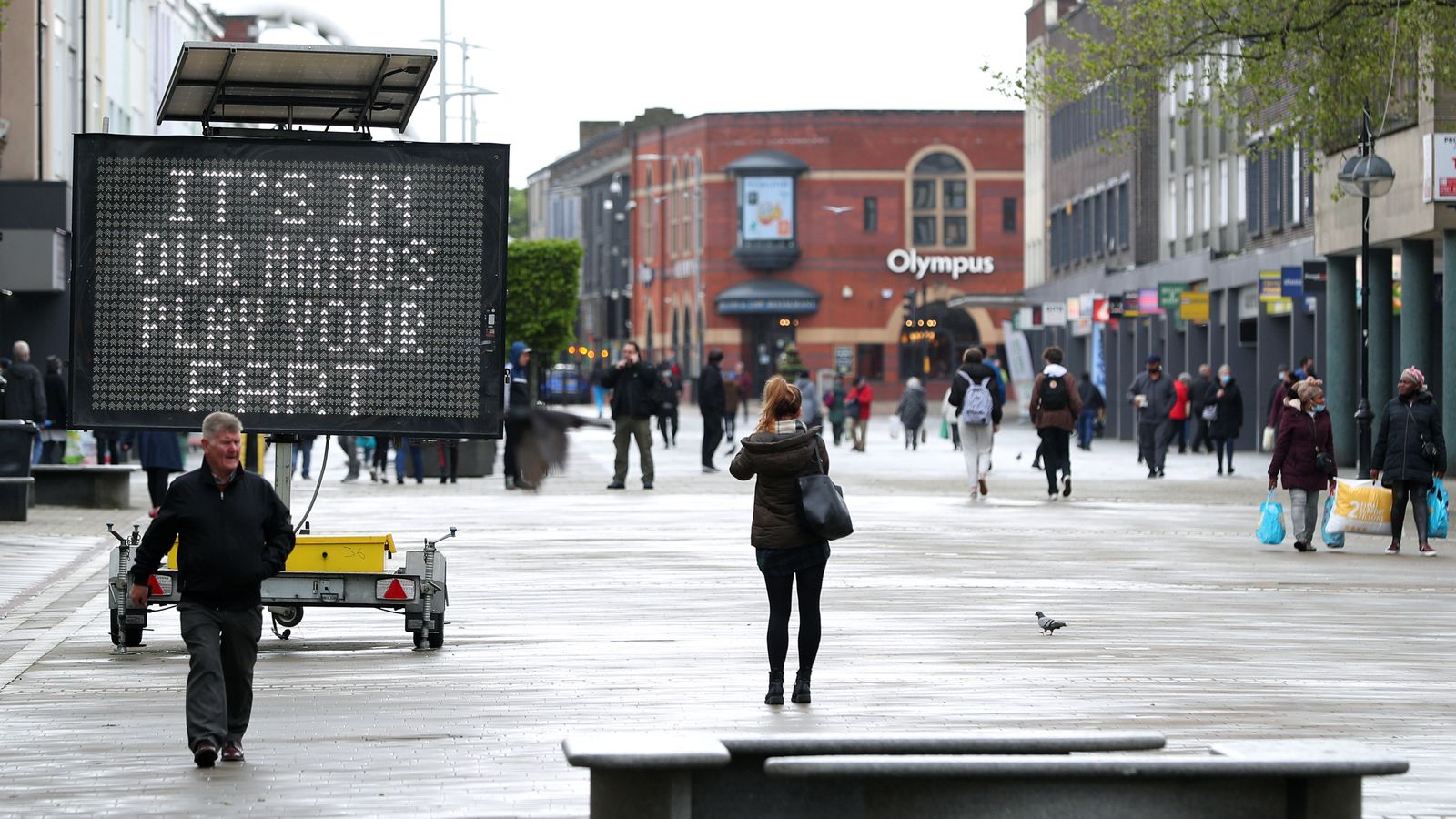 COVID infections appear to be “growing exponentially”, a professor has warned as he urged the government not to repeat the mistake of acting too late to tackle the spread of the virus.

“They seem to be multiplying by a certain fraction each day – in other words, growing exponentially,” he said.

Image: The spread of the Indian variant has cast doubt on further lockdown easing on 21 June

“We’re still at a reasonably low base but, on the other hand, we know that there’s a lag.

“Even if we were to take serious action and more social distancing action, that growth would continue for a while until the effect of that action kicked in.”

Sir Tim, a world-leading mathematician at the University of Cambridge, was hailed by Dominic Cummings as “one of the smartest people on the planet” during his evidence to MPs this week.

Before England’s first lockdown in March last year, the professor sent the prime minister’s then-chief aide a five-page document warning of the need to “move urgently to extreme containment measures”.

On Saturday, Sir Tim told Sky News that if it becomes clear that the UK’s COVID-19 reproduction number “is significantly bigger than 1 then we just have to act”.

It was announced yesterday that the R value in England is 1 to 1.1, up from 0.9 and 1.1 the previous week, suggesting the epidemic is growing.

Sir Tim said: “It worries me because the numbers do seem to be multiplying by a certain amount each day, and have been for at least the last few days.

“That seems to be a bad sign – but one would have to look more closely at the data to be absolutely sure that we should press the panic button.”

COVID-19: ‘We have to proceed cautiously’

Sir Tim added: “Nobody likes lockdown, I should stress. I don’t at all – I’m not a fan of lockdowns.

“It’s precisely because of that, that I think early action is good – because the earlier you take the action, the shorter the lockdown needs to be.

“That’s the mistake that’s been made a number of times and I really hope that particularly mistake will not be made again.”

His comments came as the spread of the Indian variant of coronavirus casts doubt on whether the planned lifting of all legal limits on social contact in England on 21 June will go ahead.

On Friday, daily COVID infections rose above 4,000 for the first time since 1 April. Overall, coronavirus cases in England are growing by up to 3% every day.

Some experts have argued that restrictions should remain in place until more people have received both doses of a vaccine, amid reports that ministers are drawing up plans for a partial end of lockdown.

Current data suggests that, although hospital admissions are rising in some parts of the country affected by the Indian variant, overall admissions remain broadly flat.

Sir Tim said if “hotspots” of the virus are “popping up all over the place, then I think it would be much better off thinking about national lockdowns” rather than introducing local lockdowns.

“If it becomes clear that the numbers are just growing exponentially and things are a little bit out of control – that I suppose is the trigger,” he added.

“The sense that the numbers are growing in such a way that we have not got control – that we’re not keeping R below 1 broadly, nationally.

“Once we get to that point, you’re going to have to take serious action at some point. It’s better to do it sooner rather than later.”

Sir Tim also said he does not see “any point” in removing all social distancing limits on 21 June because some measures to curb the spread of COVID “are quite easy”.

Examples would include encouraging people to meet outdoors or telling people to open windows during indoor gatherings, he added.

Prime Minister Boris Johnson told reporters this week that he “didn’t see anything currently in the data” to divert from the June reopening target before adding: “But we may need to wait.”