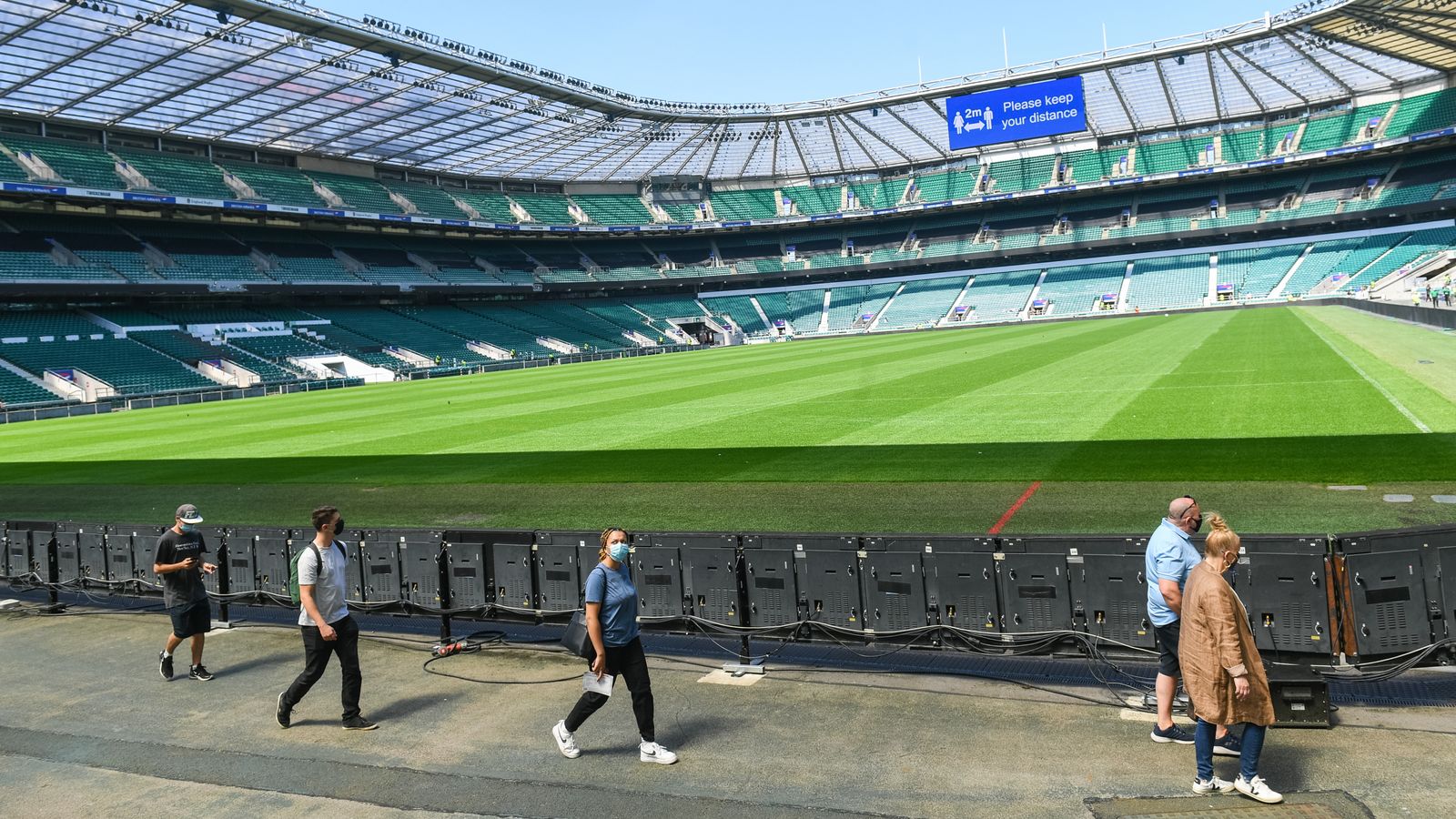 Huge queues formed at England’s biggest COVID vaccination centre at Twickenham Stadium after jabs were offered to anyone over the age of 18 for one day only.

Thousands of people over 30 had already been given a COVID vaccine dose at the home of English rugby after it opened on Bank Holiday Monday, but the local NHS trust later said they could offer them to anyone over 18.

It tweeted just before 3.20pm: “Thousands of people vaccinated at @twickenhamstad today. Still spaces and vaccine left: now open to all 18 and over who can get here before 7.30pm!”

Thousands of people vaccinated at @twickenhamstad today. Still spaces and vaccine left: now open to all 18 and over who can get here before 7.30pm!

Sky’s Ashna Hurynag was at the stadium in the sunshine and said the lines were referred to as “Disney queues”, with hundreds upon hundreds of youngsters turning up to get jabbed.

There was so much demand once the call for all adults went out that the gates closed to new arrivals at 6.45pm, with people who hadn’t booked or already started queuing told they wouldn’t be seen.

One man said he was on a day trip to Brighton with friends when they heard about the callout at midday, so they travelled back to London just to get their jabs.

“It was brilliant, we all ran together from Twickenham station, it was one of the weirdest experiences of my life, but it feels fantastic,” he told Sky News.

Another pair of friends said they had planned to meet up in the sun, but “ran” to the stadium when they heard what was happening.

“I’m excited to get it because I just want my family to be safe as well,” they added.

Government guidelines say only people over the age of 30 are currently eligible for the jab, but medics at the stadium offered it to all adults in an effort to ensure nothing is wasted.

Up to 15,000 Pfizer vaccine doses were offered up as part of Twickenham’s “Let’s Tackle COVID” event.

It was initially only offering first doses to eligible members of the public in the London boroughs of Brent, Ealing, Hammersmith, Harrow, Hillingdon, Hounslow, Kensington and Chelsea, and Westminster.

But by mid-afternoon, organisers said anyone over 18 could turn up for a jab.

Image: Thousands of young people queued in the sun for vaccines

Hounslow in particular had been identified as a hotspot for the new variant, which is believed to be more transmissible and could delay the 21 June reopening in England.

Image: Vaccines being handed out at Twickenham Stadium in west London Image: The vaccine offer was expanded to all adults for today only. Pic: NHS North West London CCG

A spokesperson for Twickenham Stadium said they were “proud” the venue was supporting one of the “biggest walk-in vaccination events” in England.

Scotland international rugby union player Rory Hutchinson was among those who queued up for a jab, saying afterwards it was the “right thing to do”.

“It was a really smooth process. I thought they were very professional. It was easy to find. I walked straight in and got my vaccine done. Then just had to wait a short while to make sure I was OK,” the 25-year-old said.

“I think we have been through a really tough time recently and hopefully we are on the mend now. I am just doing what I can to support that.”

Image: The centre started turning people away at 6.45pm

Student Flo Flake-Parsons, 24, also turned up for a vaccine and said there were no queues by the time she got her jab in the afternoon.

“It has been a really rubbish time for everyone and this is a good step back towards normality,” she said.

Image: More than 100 vaccinators were working at the stadium

Dr Genevieve Small, who is the clinical lead for the northwest London vaccination programme, said the event was for “people who perhaps knew they were allowed to get the vaccine but had not come around to sorting it out, or who have just been more spontaneous, or who had previously had questions about the programme and now feel ready to come forward for the vaccination”.

“There is, of course, a want [or a need] to make sure we are protecting the areas that are seeing more cases of the new variant,” she said.

More than 100 vaccinators worked to hand out jabs with thousands queuing around the rugby pitch.

The event was organised by the local NHS trust in partnership with Hounslow Council and supported by England’s Rugby Football Union (RFU).