‘Under siege’: Housing scheme blamed for turning a quiet suburb into ‘open prison’ 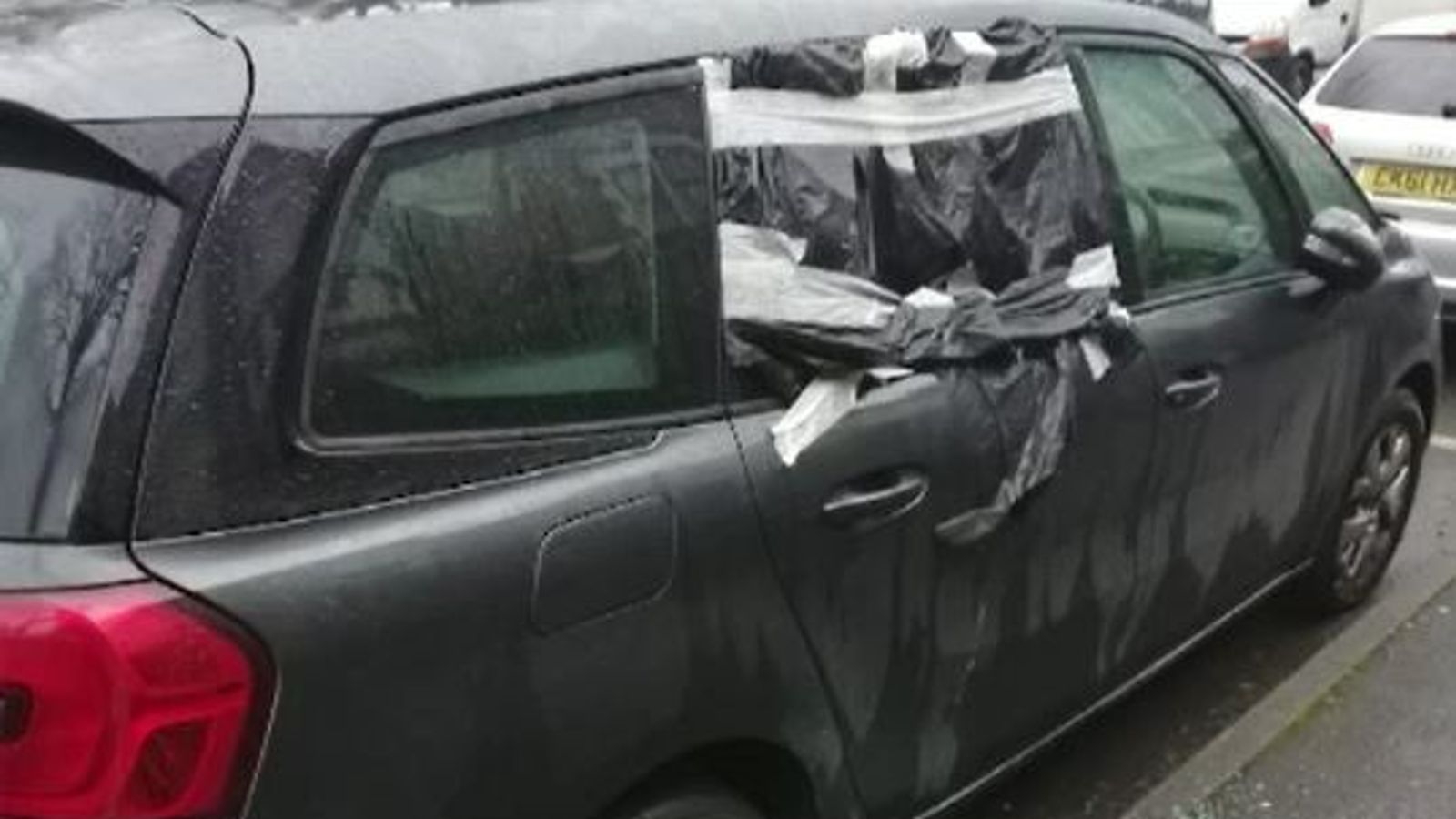 “This ain’t a crack house,” says Emma to her two flatmates, as one of them lies collapsed on the floor in the communal area of their shared accommodation.

She is videoing them getting high on crack cocaine, to send evidence to her landlord.

Emma Costigan, 24, lives in what is called “exempt accommodation”, which is supposed to help people from troubled backgrounds turn their lives around.

But a Sky News investigation has uncovered evidence that this nationally-used housing system often puts them and others at greater risk, while landlords make large profits.

Image: Locals say the surge in exempt housing has left their area crime-ridden and dirty

Some providers with seemingly no experience of the care required are converting family homes into multiple occupancy properties, then touting for business at prisons, herding troubled residents into quiet suburbs, leaving existing residents describing their neighbourhoods as “like living in an open prison”.

Family-based communities say they are “under siege” from increased levels of crime associated with this type of shared living, while vulnerable people living in the properties are sometimes abused or even murdered by flatmates.

There are also reports of domestic violence victims being housed with men who have a history of violence. Local councillors warn some groups setting up this accommodation in leafy suburbs have links to serious organised crime.

Emma currently lives on her own but had been living in her property with five men in Stockland Green, Birmingham.

“There’s a guy recently who took an overdose and died in the house upstairs. So, there’s a lot going on.”

Image: Emma Costigan says a man above her died from an overdose

Providers of exempt accommodation are expected to offer supervision and care to residents and in return are allowed to charge the council much higher prices per room, hence it is “exempt” from the housing benefit cap and “goldmine” rates have attracted many new players to the market.

Emma says when she sent photos and videos to her landlords warning them about her flatmates’ behaviour, there was minimal response.

“They just got a support worker the same as they did with me. They’d knock on the door and ask, ‘are you okay?’ You’d say ‘yes’, and then they’d leave,” she says.

“I kept complaining and saying it isn’t right – what they are doing isn’t right.

“About three weeks later the guy upstairs got found dead. I turned round and I said to the staff here, ‘I told you’.”

Her providers, Oxhill House, didn’t give a statement but said they offer adequate support and that the man who died in the property died of a lung condition.

Image: Cars in a once quiet Birmingham suburb have been found vandalised and (below) syringes dumped on the ground

A few streets away, an abuse victim was placed in an exempt property and then allegedly neglected by a different provider.

Her neighbour, Glyn, said she came to his house looking for help because her support workers hadn’t answered the phone for two weeks.

“She looked hungry. She was frightened, she was not all there mentally,” he said.

“She had no crockery, no cutlery, no food, no clothing, no toiletries. On numerous occasions she said she’d tried to get in touch with them, but nobody was answering the phone. You walked through into the kitchen and into the downstairs bathroom, and there was faeces and blood on the floor.”

Glyn (who didn’t want to provide his surname) said two male drug-takers were later put in with this woman.

The problems associated with exempt housing appear to be systemic and authorities seem powerless to deal with them, even though there have been serious crimes linked to multi-occupancy housing from other providers.

In Northampton, Spencer Hobson was not risk-assessed by his provider before he stabbed his flatmate to death.

Hobson attacked Chris Matthews, 42, at a house for homeless people recovering from drink and drug problems in June 2018.

A safeguarding review found he had been “a dangerous man and anyone was at risk of his violent behaviour”.

In a shocking case in Birmingham last year, former student Phoenix Netts was stabbed to death by her flatmate Gareeca Gordon after the killer became sexually obsessed with her.

Gordon then chopped up the body and put it in a suitcase.

Image: Spencer Hobson was not risk-assessed before he stabbed his flatmate to death

Exempt accommodation when done properly does provide vital homes to people who might otherwise be homeless, but even homelessness charities have concerns about the way they are regulated.

With agents able to make three or four times normal rates for a room, there are fears it’s attracting businesses into the sector with the wrong motivations.

What’s more, increasing numbers of communities complain that high densities of these kind of properties are bringing violence to their doorsteps, along with causal vandalism of property and regular scenes of antisocial behaviour, such as addicts passing out on the pavement in broad daylight and fly-tipped rubbish.

“You name it, we’ve seen it. We’ve had cars attacked on this road, seven vehicles in one night. Wing mirrors broken, windows smashed in, hypodermic needles in the tyres.

“Why should you wake up to find your car has been damaged?”

Teresa has photos and videos to support everything she says.

Some streets in her neighbourhood have had more than a quarter of properties converted into multiple occupancy houses, many in the last few years.

Indeed, the growth in landlords converting properties to multi-occupancy accommodation has added to the city’s shortage of family homes.

Sky News met a Birmingham family of four, including two toddlers, that had been stuck in a temporary property for a year. The flat had no lock on the front door, windows were broken, and it was damp and infested with mice and cockroaches.

Another problem is that the transient, often over-populated houses turn streets into unhygienic dumping grounds.

Image: This family of four have been stuck in an infested property for a year

A recent report commissioned by Birmingham City Council found that Stockland Green had the highest density of exempt housing in the city and there was a direct link between that and it being one of the city’s most concentrated crime hotspots.

This small ward records over 100 crimes a day, up 14% on last year. The study found that just 20 households were responsible for 215 calls for service over the course of a year, ranging from antisocial behaviour to assault.

While this is a national problem, with issues being raised in cities from Bristol to Blackpool, Birmingham is at the centre of it.

Across the city, exempt accommodation has nearly doubled in 18 months, from 11,000 units to over 20,000, but the council says it is powerless to stop landlords funnelling problems into their communities

Sharon Thompson, cabinet member for homes and neighbourhoods on the city council, told Sky News that she thinks the whole thing is “a scandal”.

She said: “We know there’s a lot of providers and organisations that are directly going to probation officers or prisons outside of the city and saying, ‘we’ve got properties, do you want to let through us’, and these are providers we wouldn’t necessarily use ourselves as a local authority.”

Ms Thompson and former police and crime commissioner David Jamieson have written to Housing Secretary Robert Jenrick, warning: “We’ve identified that some ‘exempt’ landlords have links to serious organised crime groups and these landlords are exploiting the most vulnerable people.

“The majority of the tenants are vulnerable people we have seen being subjected to modern slavery, recruited for county lines or used to shoplift and commit minor crimes.”

Ms Thompson is urging the government to give local councils the power to refuse landlords on the grounds of oversupply and to “enable stringent checks” on those offering the accommodation.

She also wants improved regulations on the standard of care offered to tenants.

Andy Howell recently became chair of New Roots, one of the city’s big providers of this accommodation. After seeing what was happening, he sacked several staff and cancelled relationships with many of his organisation’s network of agents and landlords.

He thinks the whole thing should be scrapped and told Sky News: “If you were looking to create a system that was the most vulnerable system you could – that was almost guaranteed for abuse – you couldn’t design a better system than this.

“There are so few checks and balances in there that it is inherently unsafe.”

Asked if rape victims had ever been housed with former rapists, Mr Howell replied: “Obviously, it shouldn’t happen. Providers shouldn’t do that, but it has to be said, we’ve decommissioned and ended our relationships with providers because of those kinds of issues.”

The Ministry of Housing, Communities and Local Government told Sky News: “All supported housing should be of good quality and provide the right support for residents.

“We are currently running extended pilots in five areas, backed by £5.4m, trialling new approaches to crack down on the small number of landlords who provide inadequate support to vulnerable people living in supported housing.

“Birmingham has received £1.84m to test approaches to driving up quality in supported exempt accommodation – this includes launching the city’s new Quality Standards for supported housing and providing training for landlords to improve standards.”

The Regulator of Social Housing said: “We take failure to comply with our standards by any provider registered with us seriously. We take action where registered providers have breached our standards including appointing Board members where necessary.”

The regulator said it had conducted a number of investigations and found 14 providers “were not complying with our standards”.

It added. “A number of these providers operate across a large number of local authorities. We are monitoring the progress non-compliant providers are making to put things right and will take further action in line with our remit as needed.”

But many say the whole system is simply a mess and urgently needs changing.