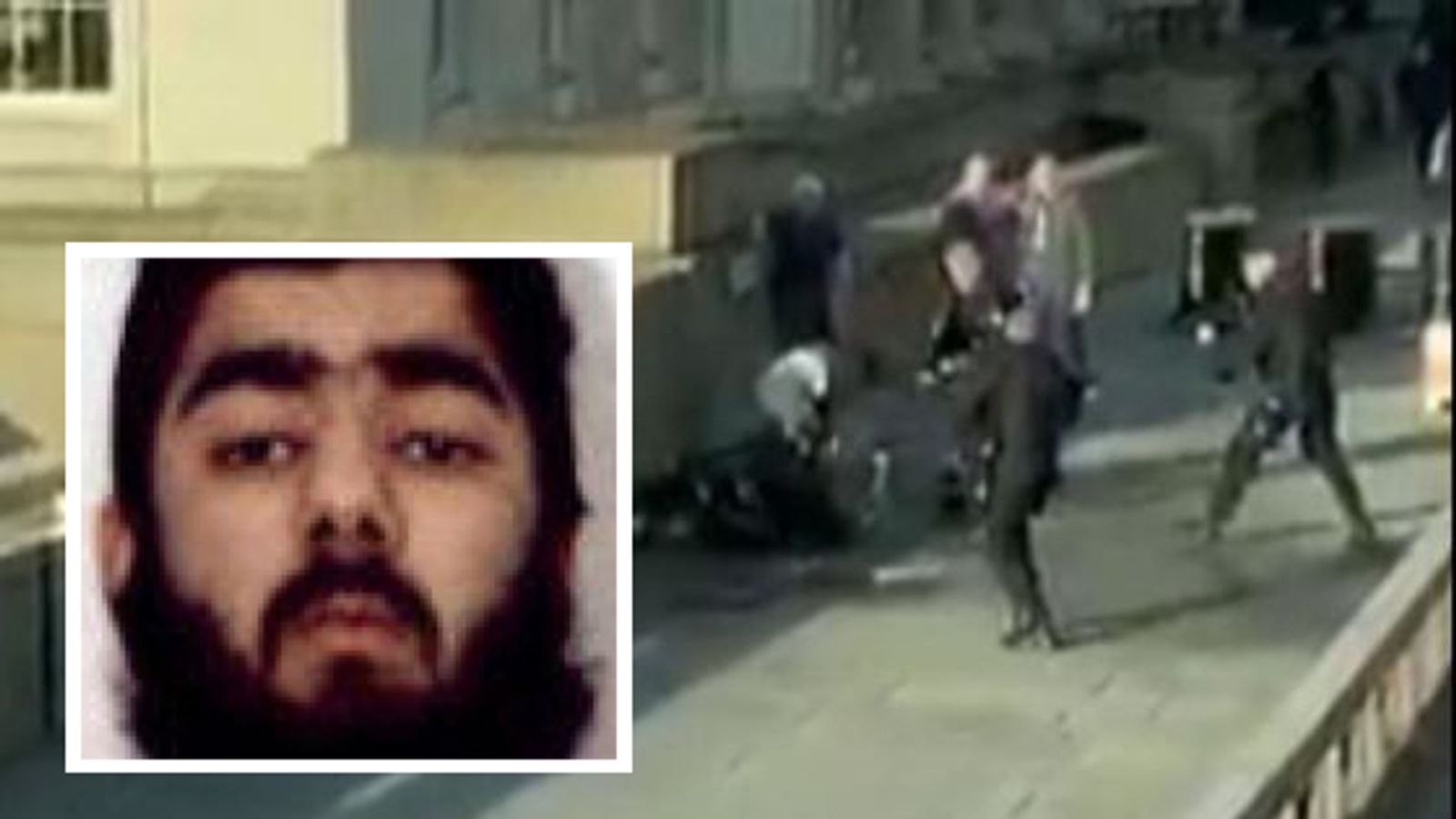 The first police officer to open fire on London Bridge terrorist Usman Khan has spoken of the moment he came face-to-face with the attacker and was told: “I’ve got a bomb.”

The officer, known by the code WX99, told an inquest he initially thought the suspect was unarmed as he lay on the pavement and was goading the officer to kill him.

Image: Khan pictured at Bank station in London before the attack

He also thought Khan could be mentally ill and he might be accused of shooting an innocent man.

He then checked the 28-year-old for any hidden explosive device and found a belt, copper wire, containers and what looked like white plasticine.

Then, he said, all he could think of was to get the men tackling Khan off him so he could shoot the attacker.

He told the inquest: “I thought the bomb was 100 per cent real and that he would detonate it and we were all going to die.”

He said as soon as the last of Khan’s attackers was pulled clear he fired twice. At the first bullet Khan relaxed and at the second he slumped. “I assumed I had killed him.”

But he hadn’t, and Khan continued to move, lifting his arms up and down and after eight minutes tried to sit up.

Another officer, who fired 10 bullets at Khan, said he wanted to “neutralise” him because he appeared to wearing a suicide vest.

The officer told the inquest into Khan’s death he thought he and his colleagues would never see their families again after spotting what he thought was an improvised explosive device.

He said he fired several shots from 50 yards away from Khan.

“To me it looked viable and real,” he said.

“To be honest, I did not think I was going home.”

Image: Usman Khan attacked people in Fishmongers’ Hall before being chased on to London Bridge

The officer, known during the hearing as WS5, said he tried to “neutralise him by shooting him in the head”.

One shot hit Khan in the head and he appeared to wipe blood away. The officer fired more shots at his chest, some of which he believed hit him.

The inquest was told he fired 10 shots from his Heckler and Koch G36 assault rifle, half of the carbine’s magazine.

He had arrived with two firearms colleagues and had been involved in pulling away several people who were wrestling with Khan on the pavement.

He had moved away after spotting Khan was wearing a belt with cigarette packet-size packages, tape and wires. He said he knew from training that he should be 100 metres away before firing at such a target.

He said as he moved off he heard colleagues firing a Taser stun gun and two bullets. He took cover behind a wall.

The inquest heard that eight minutes elapsed between his colleagues’ initial two shots and his own firing.

He said he opened fire because Khan was moving around and was still a viable threat.

“I believed he was still a threat and needed to be neutralised as soon as possible,” he added.

He had been released from jail nearly a year earlier after serving eight years for plotting a jihadi training camp in Pakistan.

The jury inquest, at the Guildhall in the City of London, continues.

Conservative Party fined £10,000 for sending emails to people who did not want to get them

COVID-19: More than half of adults in UK have now had two coronavirus vaccine doses