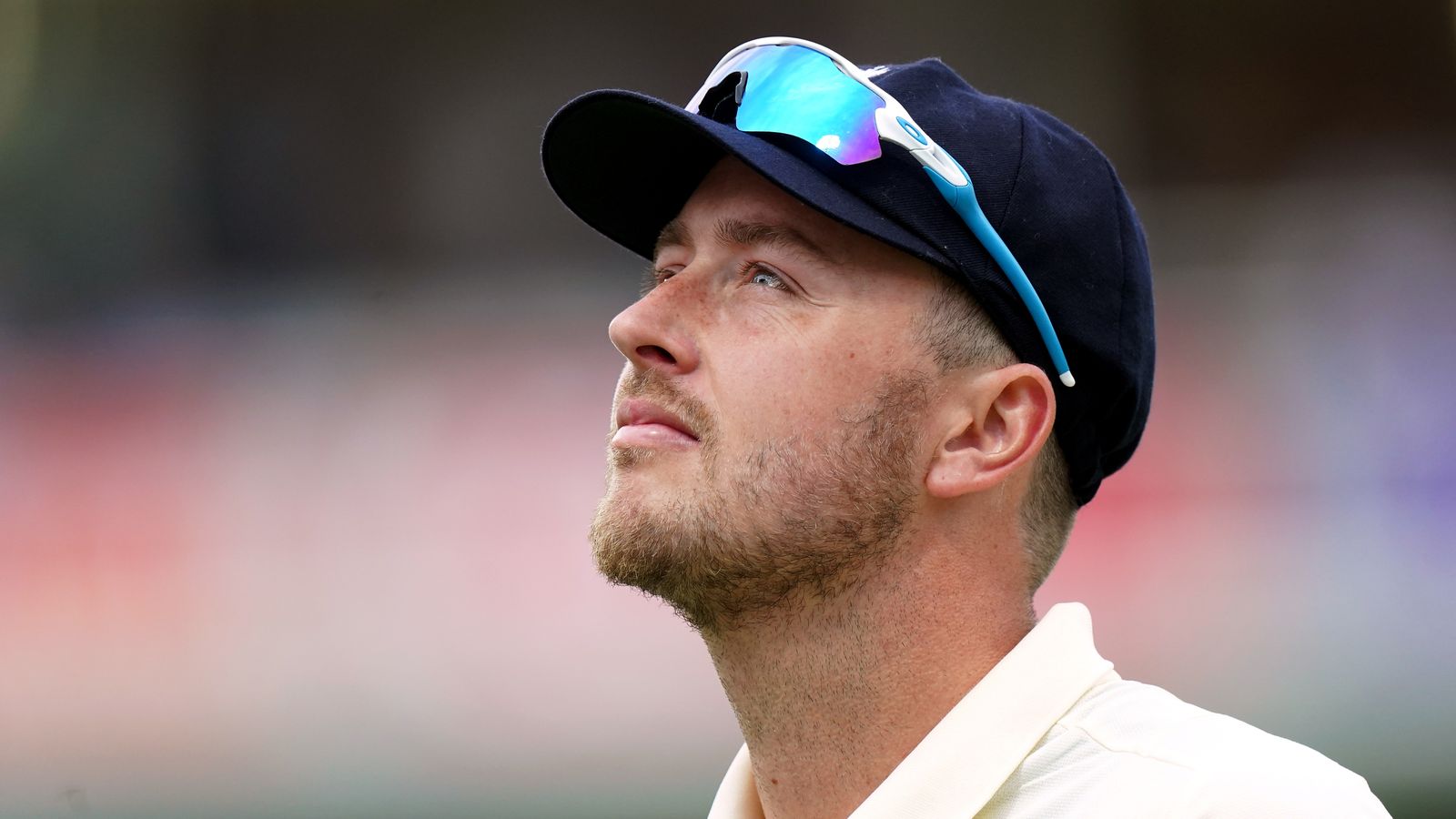 England cricketer Ollie Robinson has apologised “unreservedly” for a number of racist and sexist messages he posted on Twitter in 2012.

The fast bowler, who also plays for Sussex, added he is “ashamed” of the tweets he posted as an 18-year-old.

The cricketer made disparaging remarks about Asian people and women in the tweets, which have resurfaced on the day he made his England Test debut.

Image: Ollie Robinson has apologised for the tweets he posted in 2012

Robinson told Sky Sports after day one of the first Test against New Zealand on Wednesday: “On the biggest day of my career so far, I am embarrassed by the racist and sexist tweets that I posted over eight years ago, which have today become public.

“I want to make it clear that I’m not racist and I’m not sexist.

“I deeply regret my actions, and I am ashamed of making such remarks.

“I was thoughtless and irresponsible, and regardless of my state of mind at the time, my actions were inexcusable. Since that period, I have matured as a person and fully regret the tweets.”

He added: “I would like to unreservedly apologise to anyone I have offended, my teammates and the game as a whole in what has been a day of action and awareness in combatting discrimination from our sport.”

Robinson went on to say that Wednesday should have been about his “efforts on the field” but his “thoughtless behaviour in the past has tarnished this”.

He added that he had “worked hard” to turn his life around “over the past few years” and had “considerably matured as an adult”.

Robinson’s statement continued: “I don’t want something that happened eight years ago to diminish the efforts of my teammates and the ECB as they continue to build meaningful action with their comprehensive initiatives and efforts, which I fully endorse and support.

“I will continue to educate myself, look for advice and work with the support network that is available to me to learn more about getting better in this area. I am sorry, and I have certainly learned my lesson today.”

Image: The tweets have resurfaced on the day Robinson made his Test debut

Before the start of the Test, the England and New Zealand players took part in a “moment of unity” to show their collective determination to end discrimination in cricket.

The players and match officials stood in silence on the outfield, facing the pavilion, with the England side in T-shirts that incorporated anti-discrimination messages on their front and back.

England and Wales Cricket Board chief executive Tom Harrison condemned Robinson’s historical tweets and insisted an investigation would be opened as part of a disciplinary process.

He said in a statement: “I do not have the words to express how disappointed I am that an England men’s player has chosen to write tweets of this nature, however long ago that might have been.

“Any person reading those words, particularly a woman or person of colour, would take away an image of cricket and cricketers that is completely unacceptable. We are better than this.

“We have a zero-tolerance stance to any form of discrimination and there are rules in place that handle conduct of this nature. We will initiate a full investigation as part of our disciplinary process.”

Image: Robinson has said he is ‘ashamed’ of the tweets that have emerged

Robinson’s county side, Sussex, offered their support to the bowler while criticising the tweets he sent when he was a teenager.

A club statement read: “There is simply no place for discrimination of any kind in cricket or anywhere else. We’re committed to making cricket in Sussex a game for everyone, so it goes without saying that we were beyond disappointed to read these tweets when they were brought to our attention today. Their content was wholly unacceptable.

“We are pleased that Ollie has apologised unreservedly and taken responsibility for a significant mistake that he made as a teenager. His age does not excuse the content of these tweets in any way and he will now suffer the consequences of his actions.”

Nasser Hussain, a British Indian former cricketer who captained the England team, said he hoped the emergence of Robinson’s tweets would serve as a stark warning to others.

He said: “If you are going to wear T-shirts about online hate and online abuse and sexism and racism, that you can’t be doing this; it’s just not good enough, it’s just not on.

“But I also think we are probably a bit of a cruel society if we don’t realise that an 18-year-old does make mistakes and he has made mistakes and he’s made it horribly wrong and he’s fronted up.

“It does not make it right in any way; I’ve read the tweets, I’ve seen the tweets, they are horrible, they are not right and you should never say those things whether you are 18 or 28.”