COVID-19: ‘Panic’ and ‘devastation’ for Britons in Portugal as country comes off travel green list 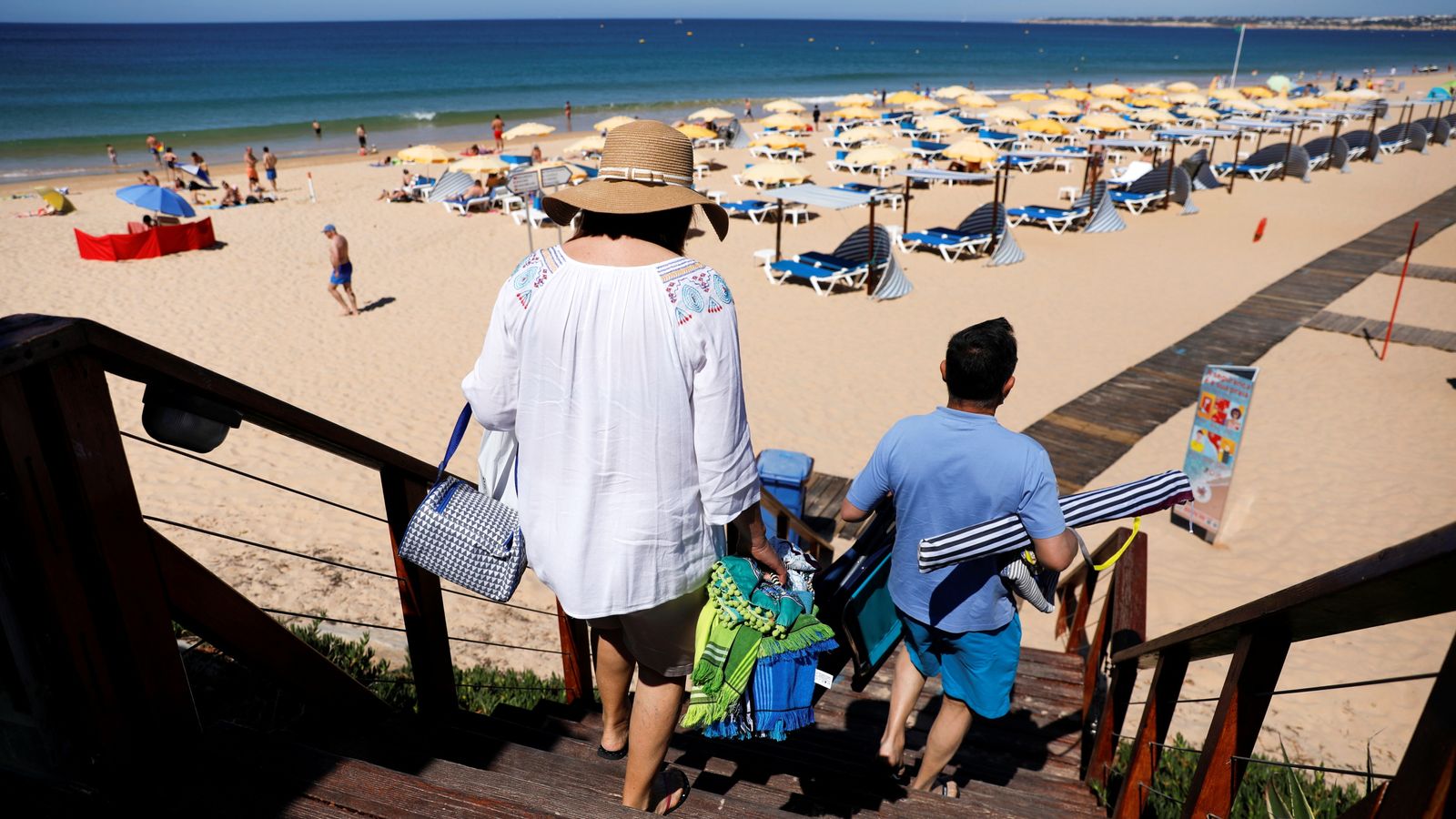 Britons in Portugal who are scrambling to get back to the UK to beat next week’s quarantine deadline face paying hundreds of pounds more for earlier flights.

Passengers arriving in Britain after 4am on Tuesday will need to self-isolate at home for 10 days after the government announced it was removing the southern European country from the green list and putting it on the amber list.

A seat on a Ryanair flight from the capital Lisbon to Manchester on Monday costs £339, whereas the same route is just £75 on Wednesday.

Also British Airways is charging £348 for flights from Faro to Heathrow on Sunday and Monday, but the price drops to £137 on Tuesday.

Image: A seat on a Ryanair flight from Lisbon to Manchester on Monday costs £339, but the same route is just £75 on Wednesday

The UK’s largest tour operator, Tui, said it has 9,500 customers in Portugal but that figure was already due to have fallen to 2,000 by Tuesday because of the end of half-term for schoolchildren.

The firm is allowing consumers to change dates, but is not offering refunds as the Foreign, Commonwealth and Development Office does not advise against travel to the country.

But Britons living and holidaying in the EU nation and others who planned to visit soon have spoken of their panic and devastation following the change in travel status.

Ms Dunne was due to come home from Portugal on Tuesday, and she has had to rebook for Sunday.

She told Sky News: “We panicked and booked a flight for tonight because we were so worried it would come in with immediate effect, and we can’t self isolate. We’ve managed to move our flights to Sunday but we’re still losing money on the hotel.

“It should just never have happened. The infection rate here is the same as the UK, especially in this part of Portugal. Why let us come in the first place if they were going to make us isolate?”

The Brennans have a house in Portugal, and say they are “devastated” the country is going on to the amber list.

He says 80% of his customers are British and “the decision to put Portugal on the amber list just doesn’t make sense, the numbers aren’t bad in this part of Portugal”.

He added: “Things were just getting back to normal, I don’t know how we’ll cope now without our British customers.”

Ms Teixeira, from London, had been due to be reunited with her family in Portugal for the first time in 18 months but says her hopes were “crushed” at the last minute by the government’s decision.

The retail worker said: “Portugal’s status changing so last-minute has made everyone stressed.

“I was planning to go on Monday and decided to cancel it because Portugal got moved to the amber list.

“I work in retail so quarantining at home for 10 days after coming back isn’t really an option.”

Ms Teixeira, 24, said she is “sad and frustrated” at not being able to see her family after such a long time apart.

Travellers have to take a COVID-19 test three days before their flight to the UK and this is leading to difficulties for Britons due to a reported lack of tests available.

Property developer Simon Smith from Stamford, Lincolnshire, is currently in the Lagos area with his wife and two young children.

He hopes they can fly home on Saturday, earlier than planned, but they have been unable to get tested despite visiting five medical centres and the region’s main hospital.

He was turned away from one centre after it ran out of testing kits.

“There were about 35 people in the queue, all British, and they told us, ‘the first 15 are okay, but the rest of you might as well go home because we don’t have enough tests’,” he said.

The family have been told the airport has a small amount of coronavirus tests available, so plan on turning up to their flight five hours early in the hopes of getting one.

A Portuguese epidemiologist claimed the UK’s decision to move Portugal to the amber tier was “an overreaction”.