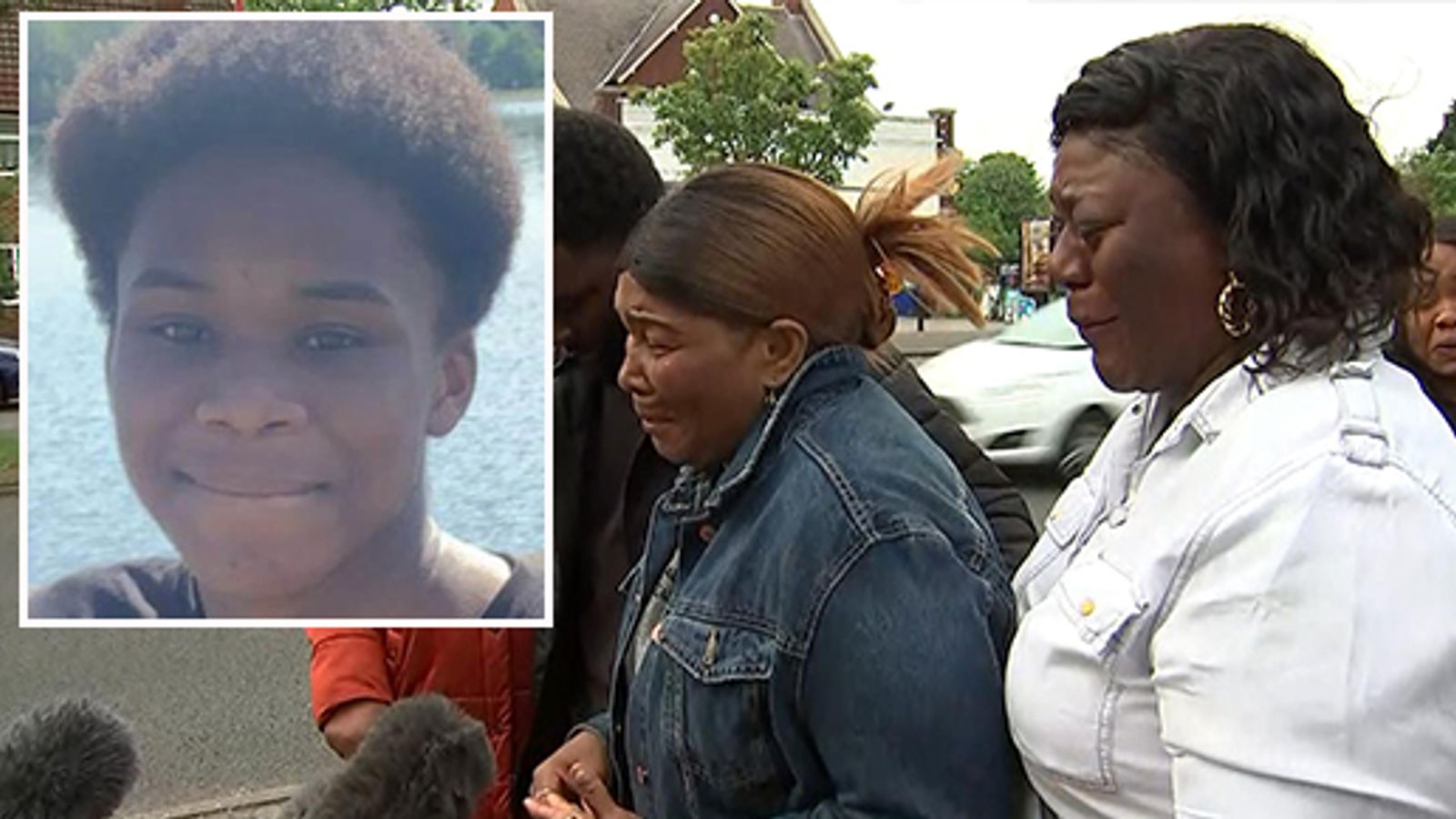 The mother of a 14-year-old stabbed to death in Birmingham has paid tribute to her “incredibly talented young boy”.

Dea-John Reid is understood to have been chased in College Road, in the Kingstanding area of the city, at about 7.30pm on Monday, before he was attacked.

Speaking to reporters at the spot where her son died, Joan Morris sobbed as she gave an emotional statement about her loss.

“I sent my son to play football and he didn’t come home, what am I supposed to do?” Ms Morris said.

Image: The 14-year-old boy was stabbed at around 7.30pm on Bank Holiday Monday

Supported by family members, she also demanded an end to knife crime, asking: “How many more mothers will have to mourn for their sons for this to stop?”

And she told how she “couldn’t live” without her son: “They’ve taken away my son’s life, my son hasn’t even grown up to give me a grandchild.”

The family added: “This loss not only affects us but everyone Dea-John knew, we have lost a son, his siblings have lost a brother and others have lost a friend.

“The passing of this incredibly talented young boy will be felt by us all.”

Dea-John’s family also thanked the emergency services for their diligence and the public for their “outpouring of love and support throughout this tragic and challenging time”.

The family broke their silence as a 35-year-old man appeared in court charged with murder.

He was not required to enter a plea and has been remanded in custody until Friday, when he is due to appear at the city’s crown court.

A second man named as George Khan, 38, and a 14-year-old boy who cannot be identified for legal reasons have also now been charged with murder.

They are both due to appear at Birmingham Magistrates’ Court on Friday.

Two men aged 36 and 33, and a 13-year-old boy have been released with no further action.

West Midlands Police homicide unit, which is investigating, is appealing for information about a dark blue VW Golf believed to have been used during the attack.

The offenders are thought to have arrived and left the scene in the vehicle, registration TN07 GBR.

So far, officers have yet to trace the car.

Image: Forensic officers at the scene in the Kingstanding area of Birmingham

Detective Chief Inspector Stuart Mobberley said: “We really need to trace this VW Golf and I would urge anyone who believes they have seen the car or knows of its whereabouts to get in touch.

“It could be crucial to the investigation so if anyone has any information please message us or call.

“We are pursuing all lines of enquiry to find anyone else involved in Dea-John’s tragic death and anyone who has information should contact us.”

The force has voluntarily referred the case to the Independent Office for Police Conduct (IOPC) after “looking at previous incidents involving the victim”.

The force said a post-mortem examination confirmed Dea-John died from a stab wound to the chest.