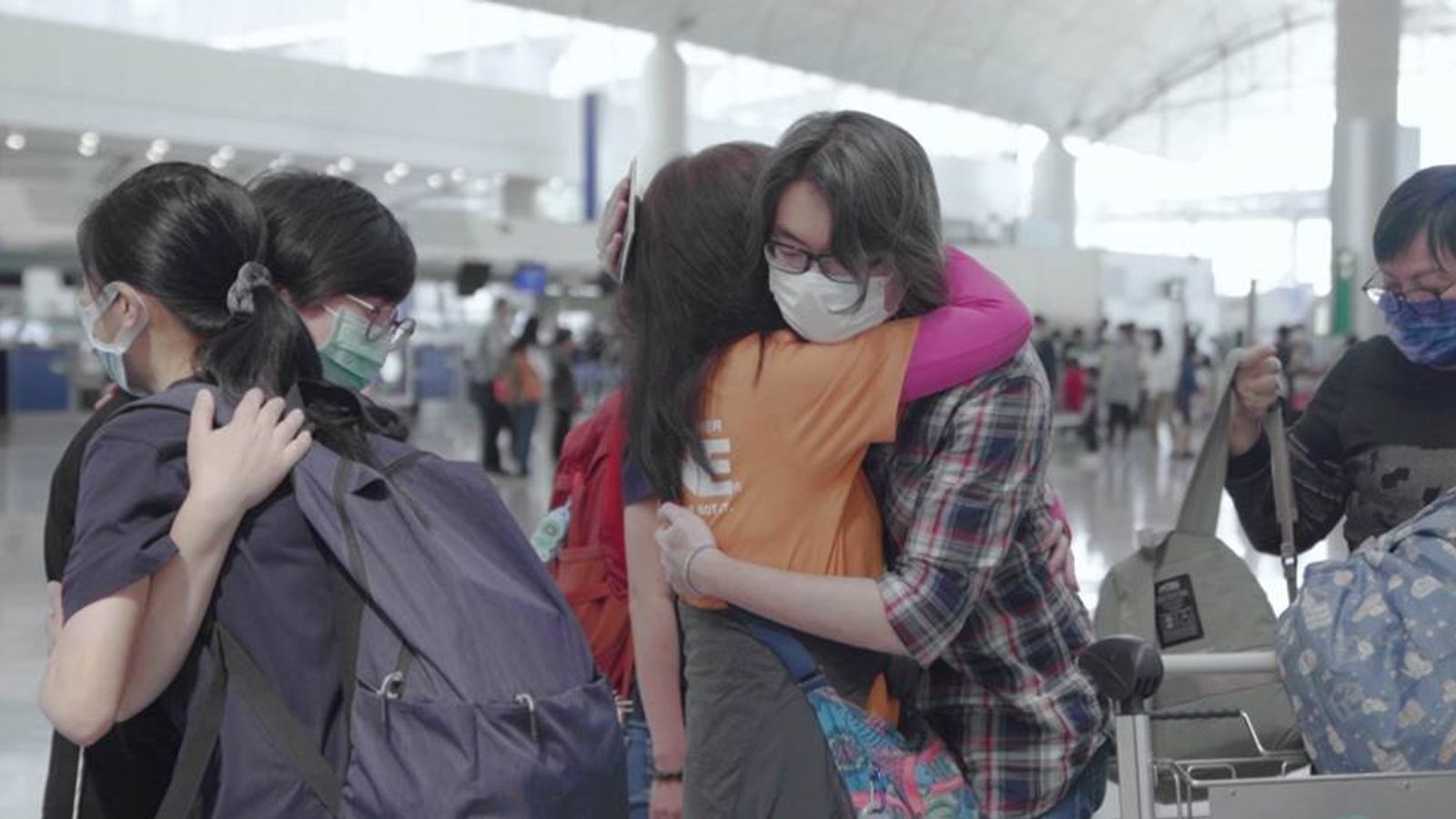 Tens of thousands of Hong Kongers have applied for a special visa offered by the British government to come and live in the UK after China cracked down on democracy in the city.

Sky News has followed one family who has taken up that offer and relocated from their much-loved home for a life of freedom in Liverpool.

Donna Kong has lived in Hong Kong her whole life.

“Nowadays, we have to be careful what we say on the streets.”

“Not just on the street, but even online, we have to censor ourselves.

“Hong Kong is going from a free, international city to just another Chinese city.”

Neither considers themselves “political” people but the 2019 protests – and the demands for greater democracy and the protection of the freedoms that were promised by China – were a turning point.

“I went to some peaceful protest marches,” Donna said.

“At the time, we wondered if the government will listen to our voices. Then later we found out it was useless, so we felt powerless. Now, we see there is a series of political reprisals.”

“We had a glimmer of hope,” Fei said. “To see whether the government will make changes when we express our views peacefully.

“We don’t support Hong Kong independence. We want to have better livelihood policies, to make this a more liveable environment.

“But in the end, we were disappointed. And that accelerated my desire to leave Hong Kong.”

Image: The family packed up their Hong Kong life for freedom in the UK

In summer last year, as the pandemic raged, Beijing imposed a sweeping National Security Law on Hong Kong, which criminalised the “subversion” of state power, among other offences.

At least 100 people have been arrested under it so far, including Jimmy Lai, the owner of the independent Apple Daily newspaper, and Joshua Wong, one of the region’s most prominent democracy advocates.

The maximum sentence under the law is life in prison.

In response, the British government made an offer to millions of Hong Kong citizens. It created a new visa scheme for British National (Overseas) (BNO) passport holders – a status open to anyone born in Hong Kong before the handover in 1997.

Some 34,300 people applied for a visa in February and March alone, according to the Home Office.

Fei and Donna were among them.

Image: The Umbrella Movement saw thousands of people protest against a destruction of democracy in Hong Kong in 2019

Donna’s younger brother, Felix, is going with them. He had a front-row seat at the 2019 protests, as a writer for Apple Daily.

“Now it’s clear that the lit fuse is right next to me, so I decided to leave,” he said.

“I’m worried. Too many things are happening every day. I don’t know what might happen to me on this journey.”

Image: Donna’s younger brother Felix was a journalist in Hong Kong and said he was constantly worried about being arrested

Fei, Donna and Felix are swapping a tropical megacity for a very different location: Liverpool.

Fei and Donna have a friend who moved there a few months ago. “He said Liverpool was suitable for us,” Donna said.

But it is a wrench to say goodbye to their friends, their family, their home, for an uncertain future on the other side of the world.

Donna said: “As the date of departure gets closer, when I meet my friends, they say, it’s the last time we’re meeting in Hong Kong. We won’t be able to see each other soon.”

“Even though I’m leaving soon, my friends and relatives are here. I want things to work out for them.”

“I can only say, add oil,” Fei said, invoking one of the slogans of the 2019 protests, which means “keep going”.

“It’s like waiting for the dawn, it’s tough. I don’t know if we’ll see the light at the end of the tunnel.”

In March, Fei, Donna and Felix went to the airport. They said a tearful farewell to friends and boarded their plane.

Image: Donna Kong and Fei Wan are among about 34,000 Hongkongers who have taken up the UK’s visa offer Image: Landing at Heathrow, the family swapped their t-shirts for thermal jackets

At Heathrow, they swapped short sleeves for thermal jackets.

“I felt really sad,” Fei said. “Our families came to the airport and we were really sad to leave.”

Two weeks later, they were settling into Liverpool. Fei was looking for a job as a bus driver, his old profession in Hong Kong – so far without success.

But there are no regrets and they say they have felt welcomed so far.

Image: Donna and Fei have settled in Liverpool, a city they said was very friendly

“We go to the post office, and the supermarket, all the people inside are so nice and willing to help,” Donna said.

“So I think living here, and not there [in Hong Kong], is a good thing.”

Fei agrees: “The UK has more freedom than Hong Kong now. And we have no need to be afraid of what we say, what we do.”

For Felix, the weight that has been lifted is even greater. “We can be much safer if we stay in the UK,” he said.

“In Hong Kong, I can’t even sleep because sometimes you may need to worry that the police will come to your house in the early morning.

“I feel that the UK government is trying to protect people coming from Hong Kong.”

Image: Felix said he feels the UK government is protecting people coming to the UK from Hong Kong Image: The couple are enjoying not having to censor their conversations

The Hong Kong visa scheme already represents an unprecedented wave of immigration from a single place.

Tens of thousands are making the same journey. But each family has its own story, each taking their own tentative steps in a new country and a new life.

For Fei and Donna, it is only the start. But it is a promising one.

“Good! I hope we chose a place you like.”