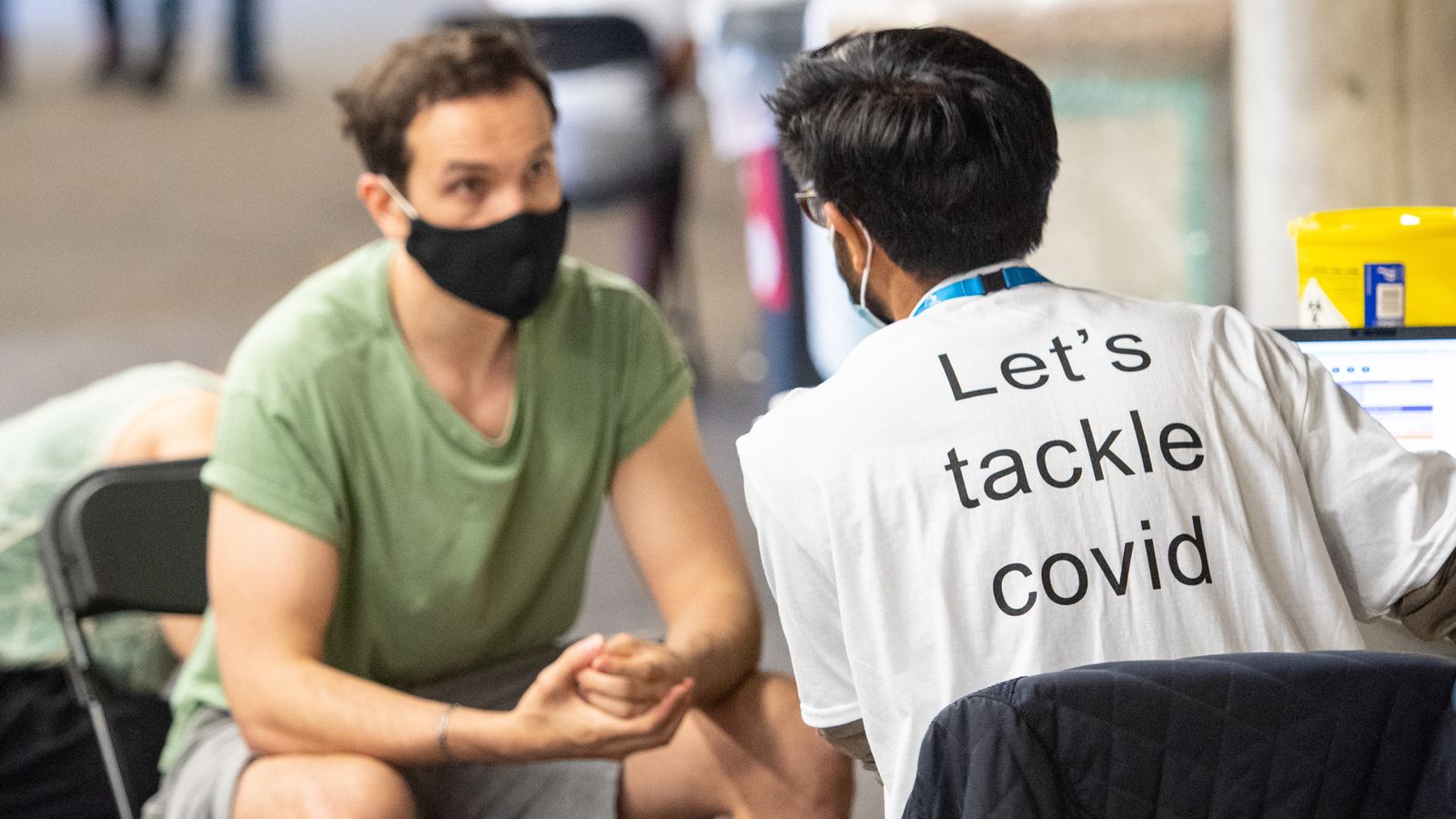 Vaccines appear to have “broken the chain” between catching coronavirus and becoming seriously ill, an NHS boss has said.

Speaking to Sky News, Chris Hopson said while the number of people in hospital with the variant first detected in India, also known as the Delta variant, was increasing, it was much lower than what was seen in previous waves.

The chief executive of NHS Providers said: “We are seeing hospitalisation numbers increase in line with the increasing number of infections that we are seeing as a result of this Delta variant.

“But they are not… going to a level where we would be worried about the NHS being overwhelmed.

“They are increasing slowly.

“The levels are significantly lower than we have seen in previous waves.”

Coronavirus case numbers rose to a two-month high on Friday, but deaths and hospitalisations remain low at the moment and the vaccination programme has hit two more milestones.

More than 40 million people in the UK have now had a COVID-19 vaccine, and more than 27 million have had their second dose, according to the latest figures.

Mr Hopson also said people being admitted to hospital now “tend to be younger” and as a result are less likely to require critical care.

“There’s much less stretch on critical care capacity than we saw in January and February,” he said.

“The third bit, which seems to us particularly significant, is there are very few who have had the double vaccination dose and then the two to three weeks of protection build-up afterwards [that are being hospitalised].

“And that’s why our chief executives are saying that they do think that the link between COVID-19 and very high levels of hospitalisation and mortality that we have seen in the previous waves – that that link has been broken for this pattern of variants.”

He added: “It’s what the clinical trial evidence would have suggested, but it’s very reassuring to see that evidence on the ground.”

Image: Chris Hopson said it was ‘very reassuring’ to see the impact vaccines were having

Asked whether he was concerned about lockdown restrictions easing on 21 June in line with the government’s roadmap for England, Mr Hopson said the situation was “complicated” and called for a “better level of debate”.

“There clearly are risks here so let me give you the three that our members are focusing on – the first is the fact that this [Delta] variant definitely is more transmissible,” he said.

“And secondly the key reason as to why the chain’s been broken is because of the vaccines, but we know we have significant numbers of people who still haven’t had their vaccination – and by vaccination I mean the double dose and then the two to three weeks build-up of protection, and we know there are some people who are in the clinically vulnerable groups, those top 1-9 groups, who still haven’t had their vaccinations so there is still a risk there.

“And the third bit is… if hospitals start seeing lots of numbers of COVID-19 patients, it means they can’t do the other work that they need to do and hospitals are really busy at the moment – they’re going through huge amounts of care backlog recovery, the emergency pathway is busier than we expected it to be.

“So yes, we’re not expecting to see anything like the rates of hospitalisations that we saw in previous waves but even small increases in COVID-19 numbers means we probably will need to dial back on that backlog recovery, which is a concern.”

‘No final decisions’ made on lockdown lifting

The comments come as the government is “drawing up other options” before making a decision on whether to completely lift COVID restrictions on 21 June.

A government figure told Sky News that Number 10 was still planning to go ahead with the final step in the roadmap, but is waiting for more data before taking any decisions.

Options under discussion are said to include retaining the wearing of face masks in certain settings, continuing the work from home advice, and a slight delay to the unlocking, pushing step four into July.

But insiders stressed that there was no decision made on delaying the easing of lockdown, and said Prime Minister Boris Johnson would rather tweak restrictions on 21 June than push the date back.

Until now, the government has only ever said there is “nothing in the data” to suggest ending lockdown should be delayed.

‘Barbaric mutilation’: The rise of ear-cropped dogs in the UK