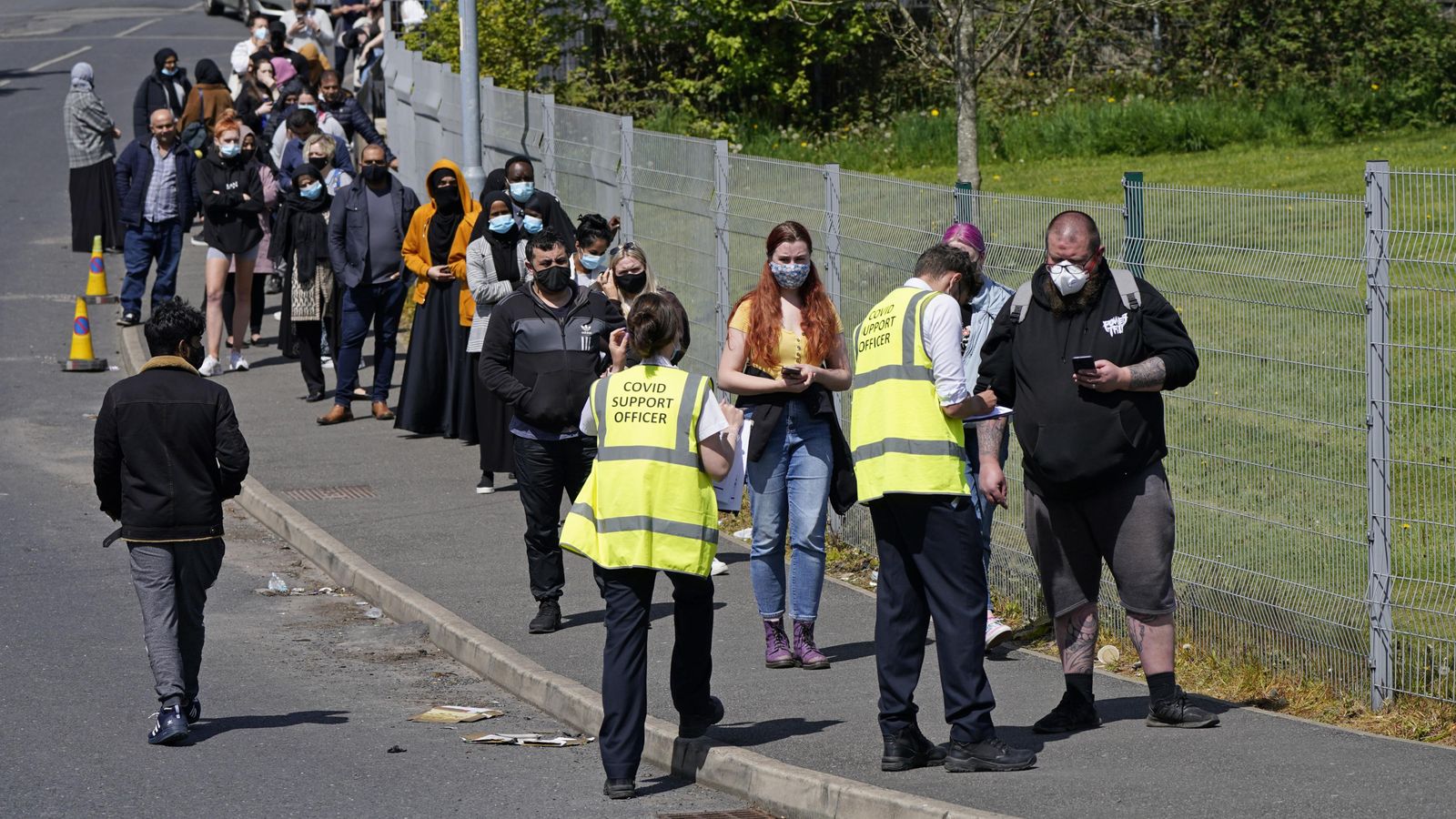 The Indian variant of coronavirus makes the decision about lifting lockdown restrictions on 21 June “more difficult”, Matt Hancock has told Sky News, due to its higher rate of transmission.

The new COVID-19 variant, also known as the Delta variant, is 40% more transmissible than the Kent (Alpha) strain, the health secretary said, leaving the easing of social distancing in the balance for the original target date.

Speaking on the Trevor Phillips On Sunday show, Mr Hancock said: “That figure is the latest advice that I have. That means that it is more difficult to manage this virus with the new Delta variant, but crucially we believe that with two doses of the vaccine you get the same protection as the old variant.”

A more opimistic Mr Hancock added that the vaccine programme meant that the link between COVID and hospital admission is “severed but not broken”.

Yesterday a government official told Sky News ministers are “drawing up other options” before a decision is made on the 21 June easing, which could include retaining some restrictions or moving the date back.

The health secretary also said vaccines would be opened up to under-30s in the next few days.

“This week we will be opening up vaccines to the under-30s and so we are getting a step closer to the point when we’ve been able to offer the vaccine to all adults in this country,” he said.

Mr Hancock also said vaccinating children over the age of 12 would have its “upsides” for education.

Image: People who are eligible are being urged to book their vaccines

The Medicines and Healthcare products Regulatory Agency (MHRA) on Friday approved the use of the Pfizer/BioNTech vaccine for children aged 12 to 15.

“I’m delighted the regulator, having looked very carefully at the data, has come forward and said that the jab is safe and effective for those who are over the age of 12,” the health secretary said.

“We’re taking advice currently from the Joint Committee on Vaccinations and Immunisation (JCVI), the experts in this, on the right approach to putting this into practise.

“I want to protect education as much as anybody does, and so making sure that we don’t have those whole bubbles having to go home, especially as we saw over the autumn for instance, that has upsides for education.”

Mr Hancock said critical to re-opening on 21 June is whether the four tests set by the government have been met: that vaccine deployment continues successfully; evidence shows vaccines are sufficiently effective in reducing hospitalisations and deaths; infection rates do not risk a surge in hospitalisations; and that assessment of the risks is not fundamentally changed by new “variants of concern”.

The health secretary said the link between cases and serious illness had been weakened by the vaccine rollout – and urged people who have had their first jabs to book their second.

“Everybody must go and get their second jab though because the first isn’t as effective on its own,” he said.

“We all need to go and get vaccinated and that way we will break this link between the number of cases to the number of hospitalisations.”

Listen and follow the All Out Politics podcast on Apple Podcasts, Google Podcasts, Spotify, Spreaker

Shadow education secretary Kate Green told Trevor Phillips On Sunday that the decision on whether or not to ease restrictions on 21 June needs to be “transparently taken” and “robust”.

“It’s a very difficult, a very finely balanced decision for the government and it’s absolutely right that it’s taken on the basis of all the available data,” she said.

Dame Anne Johnson, the president of the Academy of Medical Sciences, said next week will be “absolutely critical” in looking at data on infections.