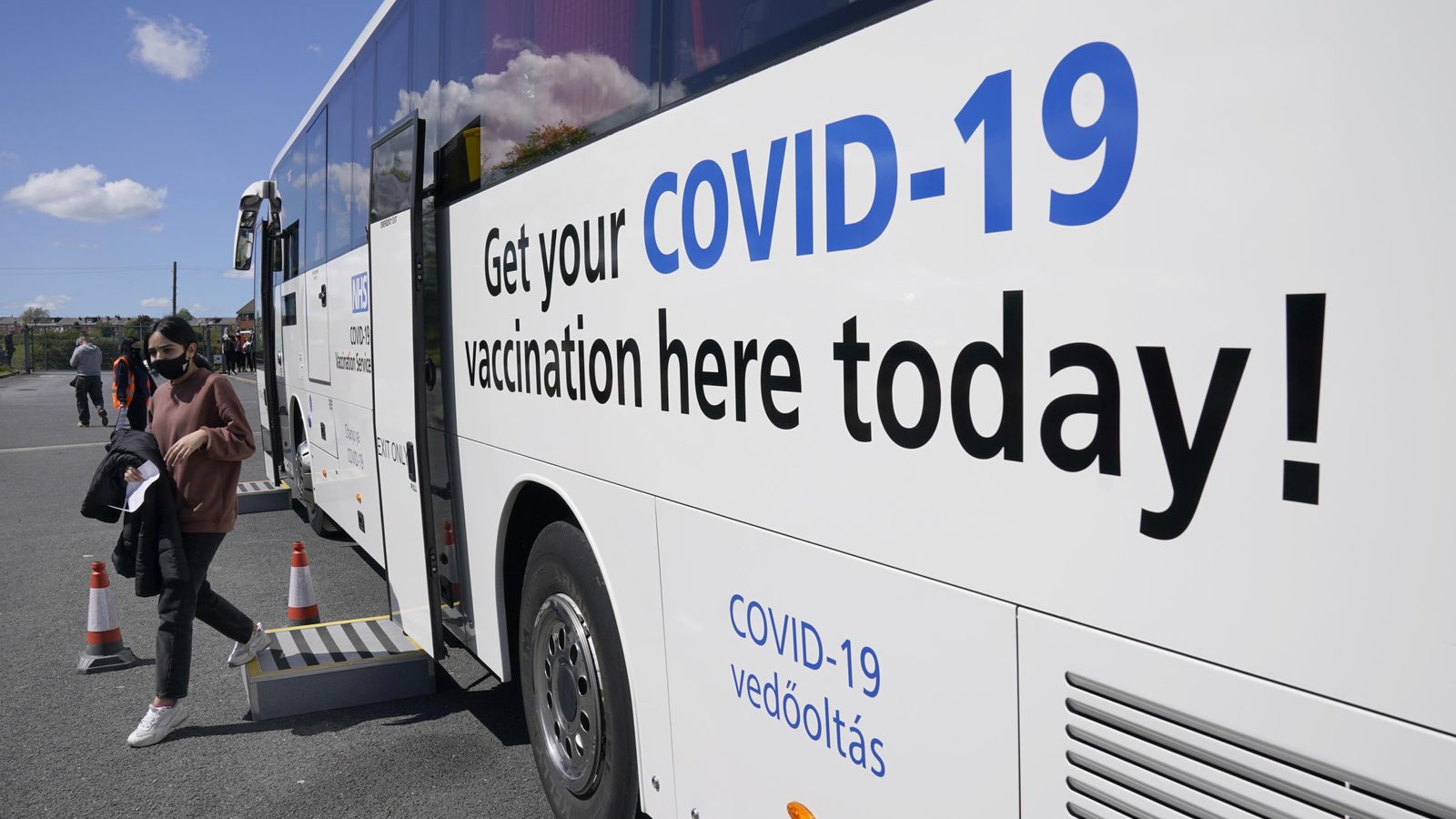 People aged 25 to 29 in England will be able to book their coronavirus vaccination from Tuesday morning.

Health Secretary Matt Hancock announced the extension of the country’s COVID-19 vaccination programme in a statement to MPs in the Commons.

Will England’s ‘freedom day’ go ahead? Live updates on the COVID-19 pandemic

He also said it was “still too early” to say whether step four on England’s roadmap out of lockdown would go ahead on 21 June.

“From this week we will start offering vaccinations to people under 30, bringing us ever closer to the goal of offering a vaccine to all adults in the UK by the end of next month,” Mr Hancock said.

“From tomorrow morning, we will open up vaccination to people aged 25 to 29.

“Over the remainder of this week, the NHS will send texts to people in these age groups and GPs will be inviting people on their lists to come forward.”

The announcement means around three million more people will become eligible for a vaccine.

All adults have already been called forward to get their vaccine in Northern Ireland and most of Wales.

In Scotland, those aged 18 to 29 have been asked to register for their inoculation, with jabs commencing from mid-June.

The health secretary said he had been “cheered” by images of “so many” young people coming forward to have their jab when eligible.

This shows that the “enthusiasm for the jab is not just the preserve of older generations”, Mr Hancock added.

“The people of this country know what it takes to keep themselves and the people around them safe.”

“The NHS vaccination programme is a real team effort and it is a testament to NHS teams across the country that we are able to open up to people in their 20s just six months on from delivering that world-first jab to Maggie Keenan,” he said.

“The tireless efforts of NHS staff to protect the people they care for and their communities has quite simply saved lives, and when you get the text, you’re next.

“Getting the lifesaving COVID-19 jab is the most important thing you can do, with NHS staff vaccinating at over 1,600 sites, including vaccine buses, places of worship, sport stadiums and other convenient locations.

“So when you get that text, book your appointment and join the millions who are already protected.”

Due to the spread of the COVID variant first identified in India, also known as the Delta variant, the NHS is speeding up its timetable for offering people their second jabs.

People are now being invited back for their second dose after eight weeks as opposed to the original 12.

The health secretary said the Indian variant had “made the race between the virus and this vaccination effort tighter”, with Mr Hancock telling Sky News at the weekend that it was thought to be 40% more transmissible than the Kent variant.

But he added that the vaccine is “breaking the link between infections, hospitalisations and deaths, a link that was rock solid back in the autumn”.

He told MPs that although cases are rising, hospitalisations are “broadly flat” and “the majority of people in hospital with COVID appear to be those who haven’t had the vaccine at all”.

On the Indian variant, Mr Hancock said: “As of 3 June our data show that of the 12,383 cases of the Delta variant, 464 went on to present at emergency care and 126 people were admitted to hospital.

“Of these 126 people, 83 were unvaccinated, 28 had received one dose and just three had received both doses of the vaccine.”

He added: “The jabs are working, we have to keep coming forward to get them and that includes vitally that second jab which we know gives better protection against the Delta variant.”

Mr Ashworth said: “Is he able to do more to drive up vaccination rates in those areas that have seen the Delta variant take off, and where uptake remains low – such as Blackburn or Leicester?

“Is he able to narrow the timeframe between doses, given that we know that one dose is not enough protection?

“As Wales are now vaccinating everyone over 18 from next week, when will England follow?”

On the prospect of step four going ahead in two weeks, the health secretary reiterated that the government would make an announcement on 14 June.

“I know that these restrictions have not been easy and with our vaccine programme moving at such pace, I’m confident that one day soon freedom will return,” he said.

No 10 backs England players’ right to take the knee