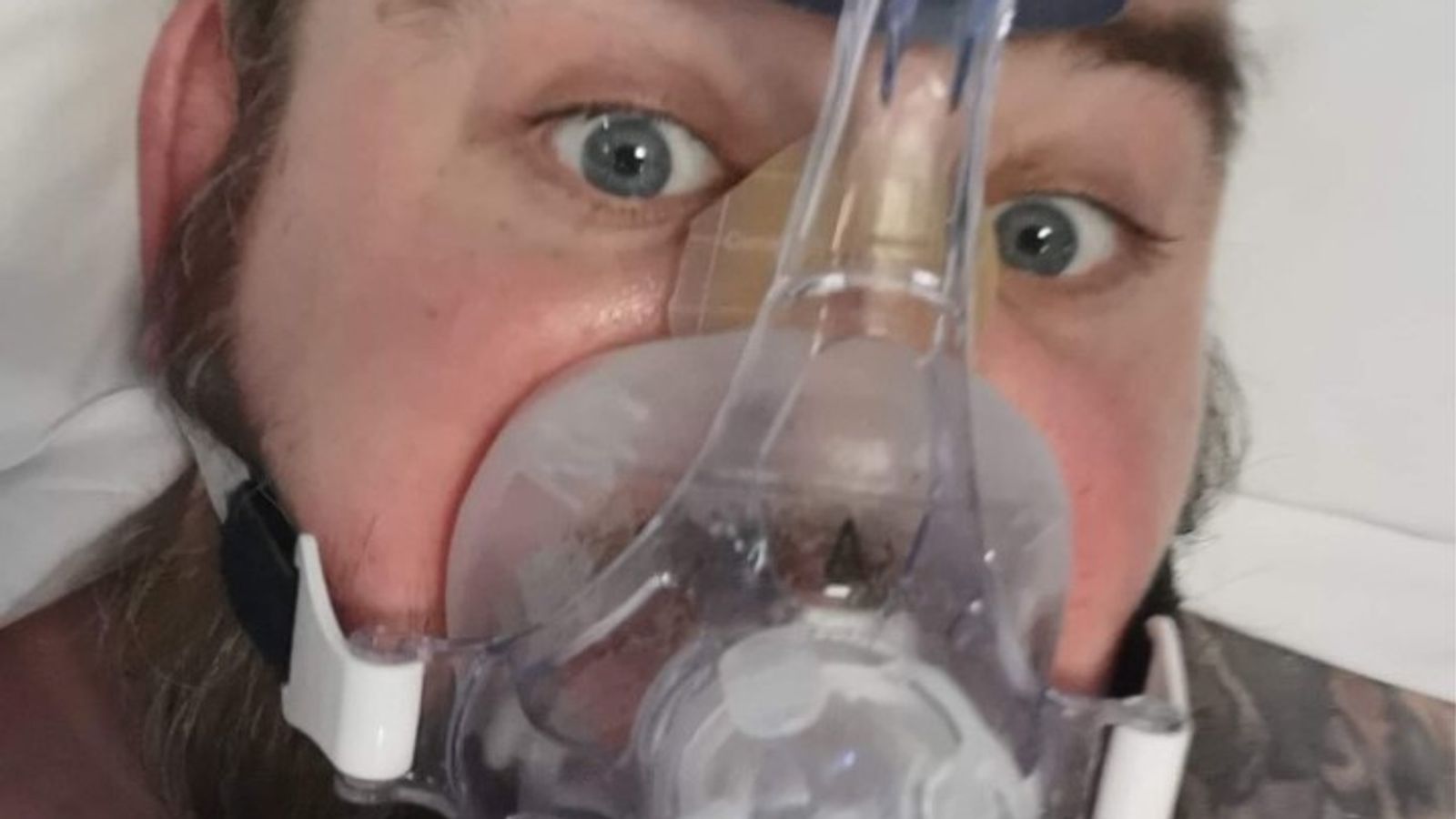 A 34-year-old father who has spent nearly five months in hospital after he almost died with COVID has told of his “blind panic” after the virus left him “gasping for air” – and he is urging the government to be cautious over the lifting of all restrictions.

Graham Horsfall has been a patient at Warrington Hospital since 16 January after contracting coronavirus during the peak of the second wave, and is still barely able to walk.

The IT consultant, who has no known underlying health condition, spent more than four months in an intensive care unit (ICU) and was told by medics he had just a 16% chance of survival.

As the government considers whether to stick with its plan to remove all COVID restrictions on 21 June amid a rise in cases linked to the Indian (Delta) variant, Mr Horsfall has urged ministers to continue with some measures including rules on face masks.

“I think they should be cautious,” he told Sky News.

“I wouldn’t just go: ‘Right okay, back to normal.’

“They could pick and choose things that could be relaxed a bit more, but also keep an eye on it.

“I think masks are here to stay for a long time… and they should be really.

“You’re not going to get rid of (the virus). It is going to come back again as it evolves and mutates as a disease.”

Image: Mr Horsfall has urged the government to be cautious over the lifting of all restrictions. Pic: Graham Horsfall

Mr Horsfall has urged people to take coronavirus seriously after challenging COVID conspiracy theorists about their views online – including members of his own family.

“I’ve got family members on Facebook saying it’s all a conspiracy and a government plot to keep us all indoors and reset the economy,” he said.

“People are losing people day in, day out. It’s affecting people long-term. It affects everybody in different ways.

“I’ve seen people on Facebook saying: ‘No one I know has had it.’ I message them and say: ‘Well now you do.'”

Mr Horsfall, who has a five-year-old son called Ollie and six-year-old daughter named Lily, began isolating at home in January after a colleague contracted COVID.

Three days later, he began coughing before his condition deteriorated and he started to “gasp for air”.

His wife Emma called for an ambulance and he was rushed to Warrington Hospital, where he continues to be treated today.

“All of a sudden I couldn’t breathe,” Mr Horsfall said. “It was really scary.

“At that point, they told me they’re going to have to put me on a ventilator because I need more oxygen.

“I am in blind panic at this point. The last thing I remember doing before they put me under was transferring money to my wife because it wasn’t looking good.”

Mr Horsfall’s wife and children were isolating themselves so they could not accompany him to hospital.

After arriving at hospital, he says he was hooked up to a ventilator and sedated.

“Basically my breathing was being done for me by a machine. It’s the only thing that kept me alive,” Mr Horsfall said.

“It’s just full on fear. It’s the unknown. Am I going to come out of this or am I not?”

Mr Horsfall said he only regained consciousness again in mid-February but he was “dazed and confused” and his condition quickly deteriorated.

He was given a tracheotomy and had to be sedated again before he awoke to find he was “literally paralysed” after suffering from muscle atrophy, meaning his muscles had wasted away.

“I could move one arm,” Mr Horsfall said.

Mr Horsfall, who could not talk due to his tracheotomy pipe, said he initially thought he has having an hallucination when he woke up before he was handed his phone so he could text his wife.

Image: Mr Horsfall was unable to see his children for months while in hospital. Pic: Graham Horsfall

He added: “One of the nurses turned around to me and basically said, based on the treatment I had…it had an 84% mortality rate – so 84% of people that had the same treatment as me, didn’t make it.

“It was a proper eye-opener.”

Mr Horsfall said seeing other COVID patients around him lose their lives was “harrowing”, including a man in his 20s who had recently become a father.

“You sit there thinking: ‘Bloody hell, it will literally take any age’,” he said.

“It’s not just taking the elderly, which people think.

“They would do their best to shield you from people passing away.

“Every time a curtain was shut, we knew someone had passed away on the ward. And that happened all the time.

“It’s harrowing for people. You make friends with people. Even though you couldn’t talk, you would give them a wave. And then all sudden that person’s gone.”

Mr Horsfall said his wife – who also caught the virus in January but only suffered mild symptoms – was unable to visit him when he first gained consciousness in mid-February due to the hospital’s COVID rules.

He added: “She was having to deal with the fact that she thought I was going to die while looking after our kids as well, which isn’t easy.

Mr Horsfall was only able to speak again after his tracheotomy pipe was removed on 12 March.

At that point, he was allowed to have one hour-long visit per week, with Mrs Horsfall required to wear full PPE and undergo temperature checks before seeing her husband.

However, Mr Horsfall had to wait until the start of May to see his children in person again when his daughter visited.

“That was emotional,” he said.

“It was a massive boost for me, mentally and physically, because it makes you push that bit harder. You take those extra couple of steps when you’re doing physio.”

Mr Horsfall said he was the last COVID patient on the ICU ward when he moved out on 25 May and he is now being treated on a respiratory ward.

He said his muscles had “rotted away” due to his lack of movement while in hospital and that he was now doing rehabilitation work and seeing a physio every day.

“I walk with a zimmer frame now, that’s how I get around,” Mr Horsfall said.

“Because of the COVID, probably the furthest I’ve gone without being out of breath is about 15 metres.

“Then you just get so breathless you have to sit down because your lungs are knackered due to COVID.

Mr Horsfall does not know when he will be able to leave hospital but doctors believe he should be able to make a full recovery due to his age.

They are now considering whether he will be able to continue his recuperation at home in the future or in a rehabilitation centre.

“I just want to be home to see my kids.”

He recently had his first COVID jab “to be on the safe side” because he fears he would not survive catching the virus again.

The health secretary says the Indian variant has made the decision about whether to lift lockdown restrictions on 21 June “more difficult” due to its higher rate of transmission.

Matt Hancock told Sky News the Delta variant was 40% more transmissible than the Kent (Alpha) strain, leaving the easing of social distancing in the balance for the original target date.

Ministers are “drawing up other options” before a decision is made on the 21 June easing, a government official told Sky News.

Eclipse: How and when to see rare solar phenomenon in UK skies this week

Colin Pitchfork: First man convicted of murder on DNA evidence can be freed from jail, says Parole Board