Murder accused signed note in his own blood of pact with devil to ‘win lottery’, trial told 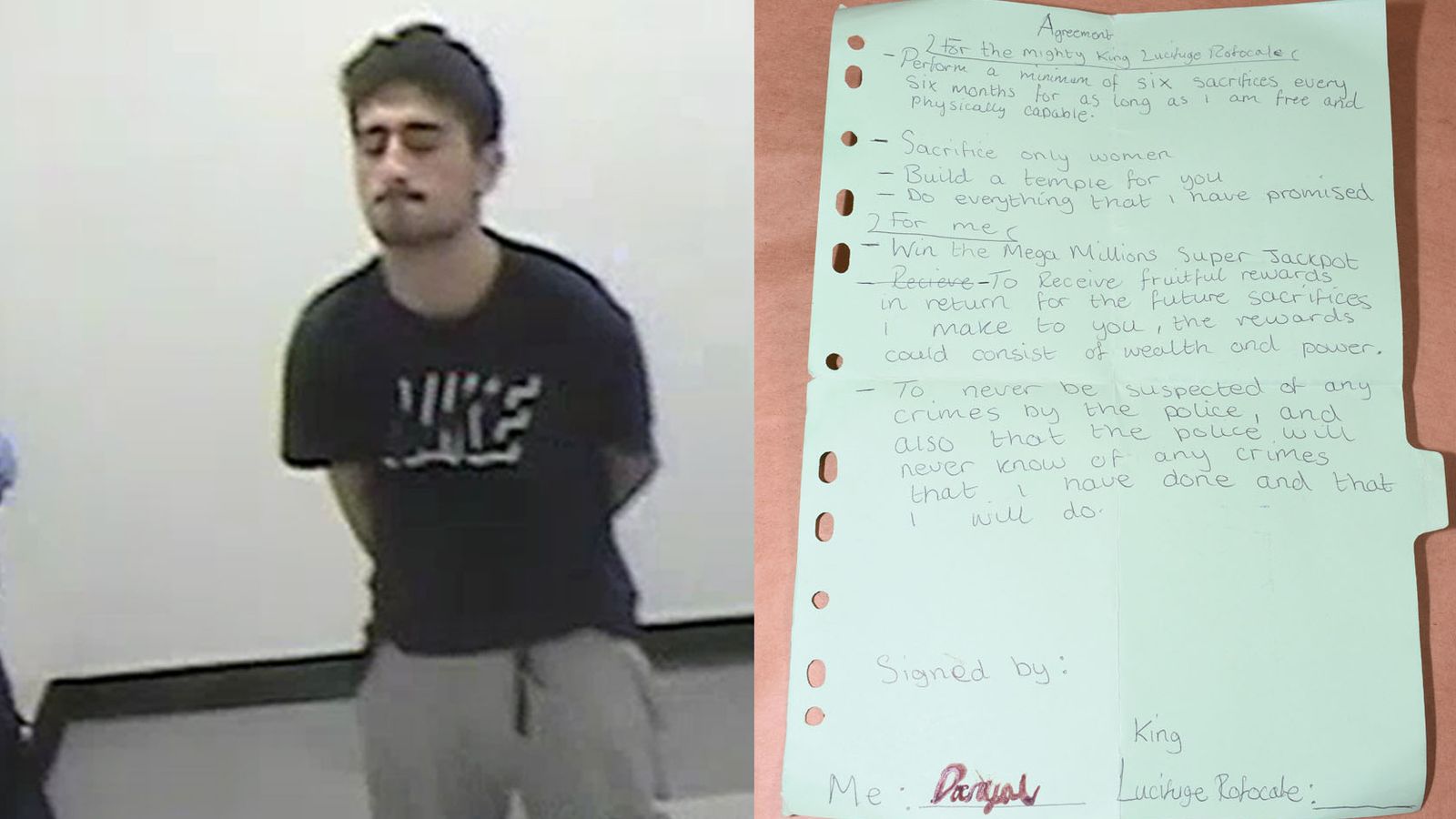 A teenager accused of murdering two strangers in a pact with the devil allegedly left a note signed in his own blood of the bargain he believed he had done to win the lottery.

Three lottery tickets were found next to a note, signed in blood, laying out his plans, following his arrest at his mother’s house in Eltham, southeast London in the early hours of 1 July, the Old Bailey heard.

PC Lyndsay Barnett, a search officer with the Metropolitan Police, found the note, written on a piece of green card on a shelf underneath the TV in Hussein’s bedroom.

Image: A closeup of a signature on the alleged agreement

Headed “agreement”, it began with the words, underlined: “For the Mighty King Lucifuge Rofocale” and went on: “Perform a minimum of six sacrifices every six months for as long as I am free and physically capable.”

It added: “Sacrifice only women, build a temple for you, do everything that I have promised.”

Underneath, again underlined, were the words: “For me” and then: “Win the Mega Millions super jackpot.”

It added: “To receive fruitful rewards in return for the future sacrifices I make to you, the rewards could consist of wealth and power, to never be suspected of any crimes by the police and also that the police will never know of any crimes that I have done and I will do.”

Underneath it had the words “me” and was signed in blood “Danyal”, and there was then the name “King Lucifuge Rofocale” underneath with a space for a signature.

PC Barnett took a photograph of the note with her mobile phone and sent it to colleagues “so they were aware straight away”, Oliver Glasgow QC told the court.

Laid out around it were a series of orange cards with symbols drawn in black pen.

Image: Three lottery tickets were found next to the note, the trial heard

Spiros Konstantis, an investigator for Camelot, told the trial that Hussein had bought three lottery tickets, for the Lotto Draw, Thunderball and Euromillions, between 9.38pm and 9.39pm on 29 June at Asda in Bugsby Way, Charlton.

Hussein told police he had injured his hand when he was mugged, following his arrest, three weeks after the double murder.

Police first visited Hussein’s father’s house in Kingsbury, northwest London, not far from the scene of the killing in Fryent Country Park, arriving around midnight.

When they were told he was at another address they drove under blue lights to his mother’s house in Eltham, arriving at 12.55am.

PC William Lucas told the court: “I immediately recognised the male who answered the door as Danyal Hussein.”

His colleagues trained the red dot of their Tasers on Hussein and PC Lucas asked him to step out of the house, put his hands on his head, and then handcuffed him.

“I told him he was under arrest on suspicion of murder because he had been linked to two murders in Fryent Park and gave the date of 6 June 2020,” the officer told the Old Bailey.

The officer said he noticed Hussein had several cuts to his right hand and three sets of stitches, two around the palm and one near the top of his second finger around 2cm long.

“I noted he appeared quite calm.”

Hussein was then taken to Wandsworth custody centre, where he was booked in wearing a black top and grey shorts.

Asked if he had any injuries, Hussein brought his handcuffed hands to the side and replied: “Yeah, yeah.” He then asked if it was an interview.

The custody officer replied: “Just a question, the injuries to your finger what happened there?” Hussein told him: “I was getting robbed.”

The custody officer asked: “How do you feel right now?”

Asked if he had “any other issues”, Hussein replied: “I’m autistic, I have Asperger’s.”

Hussein, of Blackheath, southeast London, has denied double murder and possessing a knife.

UK weather: Hottest day of the year set to arrive this weekend as Euro 2020 fever sets in