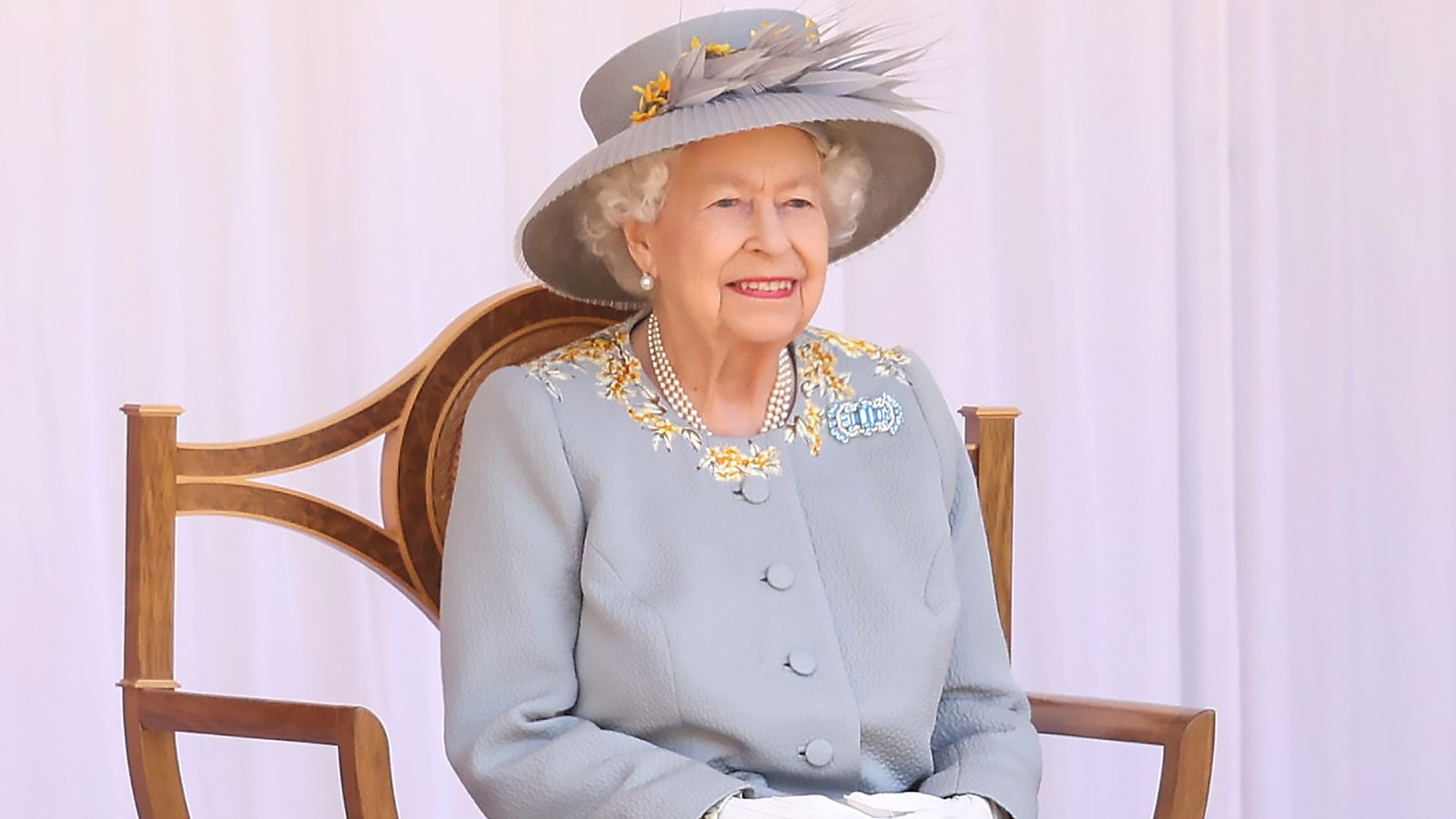 For the second year running, Queen Elizabeth II’s official birthday has been marked by an event dubbed a mini Trooping the Colour at Windsor Castle.

The pandemic meant the military commemoration of the monarch’s official birthday was staged in the quadrangle of her Berkshire home.

It is only the third time the event has been staged at Windsor.

Image: F Company Scots Guards performed the parading of ‘the colour’ in front of the Queen

The Duke of Kent, a colonel in the Scots Guards, joined the head of state for the ceremony, with F Company Scots Guards performing the parading of a flag, or standard – which is what the term “the colour” refers to – in front of the monarch, in their brightly coloured uniforms and bearskin hats.

Shortly after 11am, the Queen made her way to a small marquee, where she received the salute after musicians in the assembled formation performed the National Anthem.

Image: The Queen’s birthday parade took part in the quadrangle, or Upper Ward of Windsor Castle

Sky commentator Alistair Bruce said: “It’s many years since the Scots Guards… trooping today, have had the chance to troop their colour before Her Majesty the Queen.

“For much of this year there was concern about whether that opportunity would come. COVID has restricted so much but today as we can see, each of these guardsmen is separated by two metres from each other in accordance with those security regulations.

Image: Members of the Massed Band of the Household Division perform during the ceremony at Windsor Castle

“The music has been carefully thought through and prepared.”

After the Queen gave her permission for the guards to resume their duties as the half-hour ceremony came to a conclusion, the mounted regiments paraded past her, ahead of two simultaneous gun salutes due at midday, one in Windsor and one in Greenwich.

Image: The Queen took a seat in front of the parading troops Image: A fly-past above Windsor Castle by the Red Arrows for the Queen’s official birthday

A fly-past by the Red Arrows followed shortly after, with the RAF aircraft passing over the castle in their usual V-shape formation and with red, white and blue smoke trailing behind.

Trooping the Colour has marked the official birthday of the British sovereign for more than 260 years and involves hundreds of soldiers, horses and musicians coming together each June in a major display of military precision, horsemanship and fanfare.

Image: Members of the Household Cavalry make their way down the Long Walk towards Windsor Castle

Normally, it takes place between Buckingham Palace and Horse Guard’s Parade but, because of COVID, it has been moved to Windsor Castle to prevent crowds gathering.

The daily ceremony of the changing of the guard at the royal sites has also been stopped during the pandemic, and organisers of this year’s event say it has impacted on the ability of the soldiers to maintain their level of training.

Image: Guardsman stand in formation in front of the Queen in the quadrangle at Windsor Image: Despite the move to Windsor in order to limit numbers, many spectators still came to view the event

Lieutenant Colonel Guy Stone, who led the effort to prepare for the event, said: “It’s been extremely demanding; we’ve had to tackle COVID like everybody else, with some people needing to isolate and therefore not being able to be on parade.

“It’s been very difficult to achieve what I hope will be a good standard because we’re not doing the Changing of the Guard ceremony every day due to the pandemic – that applies to horses, the musicians and the Guardsmen with their foot drill and rifle drill.”

Image: For some of the ceremony, the Queen was able to sit down

Lt Col Stone, who serves with the Welsh Guards, was also in charge of the military’s involvement in the Duke of Edinburgh’s funeral and was was made a Lieutenant of the Royal Victorian Order by the Queen in recognition of his efforts.

Analysis: Queen on fine form on her busy birthday weekend

So many royal events that usually punctuate the year have again had to be cancelled or postponed due to COVID but there was a determination to mark the Queen’s official birthday in style.

The last time we were in Windsor for a big ceremonial event was for Prince Philip’s funeral. The armed forces wanted this to be a memorable and uplifting day for the Queen.

Last year, a socially distanced parade felt like a one-off, but with restrictions still in place it’s become the norm for the service men and women who rehearse so hard to make sure everything is perfect.

After all, they are performing in front of an expert on these things, the Queen again today looking out for every move. Attentive but also obviously amused as the Red Arrows roared overhead, possibly because they appeared so quickly after the horses had only moments earlier left the quadrangle.

The monarch, despite the recent death of her husband, and the ongoing family drama with the Sussexes, could not seem on better form on what is a busy weekend for the 95-year-old.

She seemed delighted to be out on duty in Cornwall on Friday night, laughing with Camilla and Kate as she wielded a ceremonial sword to cut a cake, and cracking a joke to break the ice as she posed for a photo with the G7 leaders.

And tomorrow the important entertaining on behalf of the government continues, with President Biden and the First Lady coming to the castle for tea.