COVID-19: PM to plead for ‘one last heave’ to freedom as he is set to delay lockdown easing by four weeks 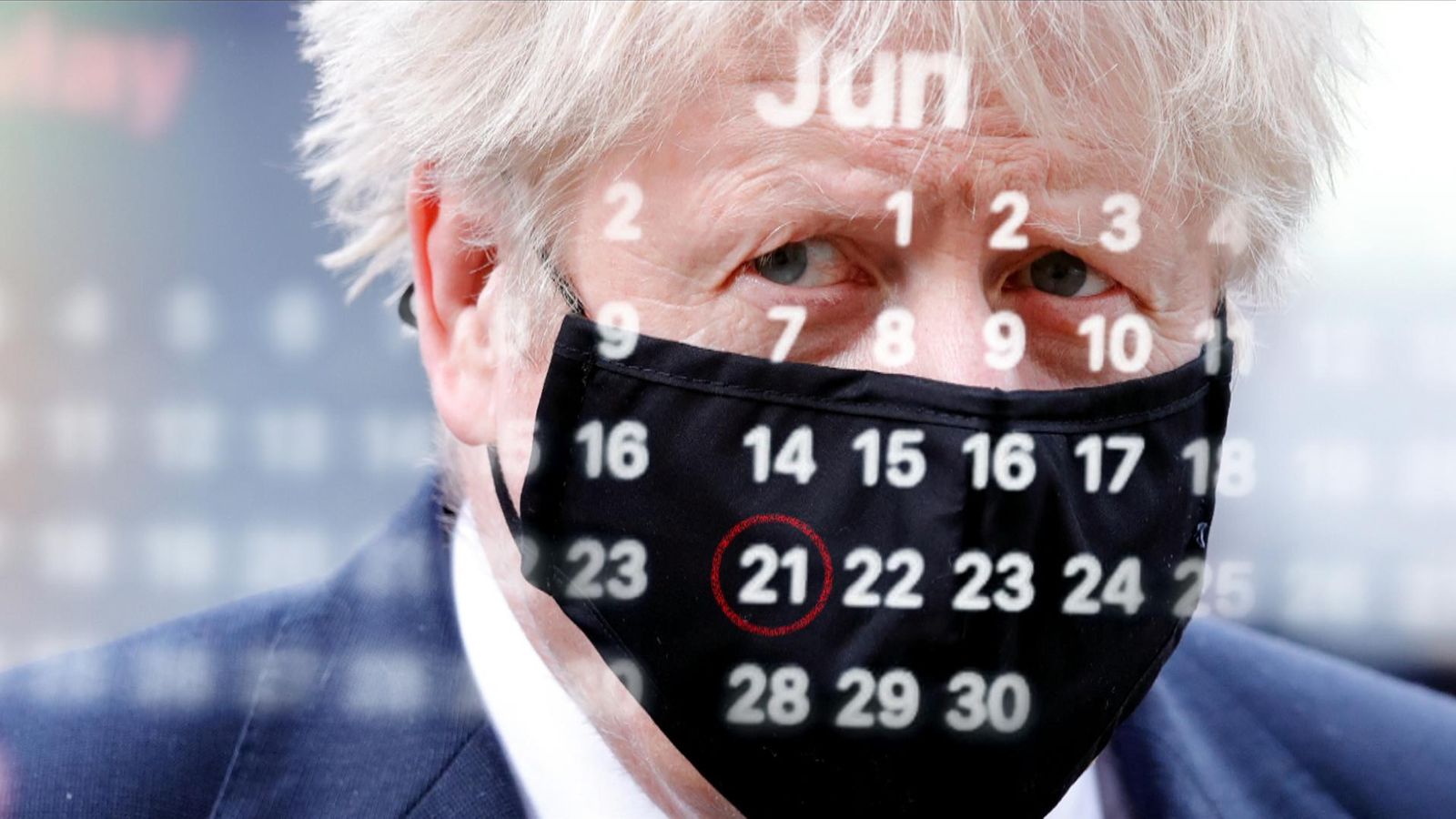 Boris Johnson will plead with the nation to make “one last heave” to freedom as he announces a delay of four weeks in lifting lockdown restrictions in England.

A government source has told Sky News the prime minister will dash hopes that Freedom Day will come in one week’s time, on 21 June, and it will instead be postponed until 19 July.

“It is one last heave,” a senior source was quoted as saying after the PM met senior cabinet ministers and his scientific advisers. “It is a straight race between the vaccine and the virus.”

Mr Johnson will blame the delay on a third wave of COVID-19 infections and say it will allow millions more people to be vaccinated and more to receive a second jab by the end of July.

As well as a delay in lifting restrictions, allowing scientists more time to monitor the Delta variant, the PM is likely to announce a drive to accelerate the vaccination programme.

But the delay means that despite the success of the vaccination programme so far there will only be minor adjustments to the current lockdown rules in England.

Under the PM’s likely plan, which will dismay many Tory MPs and business leaders, that would mean:

• Pubs remain restricted to table service, despite the Euro 2020 football championships getting under way

• Theatres and other indoor venues will be restricted to 50% capacity, despite a plea by Andrew Lloyd Webber to reopen

• Nightclubs will remain closed, but there is likely to be a reprieve for weddings, which at present can only be attended by 30 guests

Announcing his controversial decision later at a Downing Street news conference, Mr Johnson will argue that sticking to the rules now is worth it to avoid a future lockdown.

“The message has always been cautious but irreversible,” the senior government source told The Daily Telegraph. “That has been our mantra throughout and that continues.

“It would be far worse to have uncertainty and go backwards. It is better to be cautious and have certainty.”

As a sop to Conservative MPs who will be furious about a four-week delay, Mr Johnson is expected to promise a review of the continuing restrictions after the first two weeks.

But the expected delay has also provoked a furious reaction from the trade body representing pubs, cafes restaurants, hotels and nightclubs.

“A full and final ending of restrictions is the only way to ensure that businesses in this sector can trade profitably,” said Kate Nicholls, chief executive of UK Hospitality.

“If government decides it has to keep some restrictions in place after June 21, then it must prioritise those that do the least damage to business and commit to further supporting the sector.

“Hospitality is desperate to get back to what it does best and can play a key role in the economic recovery of the UK – but only if it is given permission to trade and proper support.”

Leading a backlash from Conservative MPs, Mark Harper, chairman of the COVID Recovery Group (CRG) of Tory MPs, said he feared lockdown could be extended until at least the end of September if ministers attempt to wait until the whole population has been double-jabbed.

“We have a rapid rollout of effective vaccines and are heading into summer,” he tweeted. “If, even at this point, the government won’t release restrictions, this points to restrictions in the autumn and winter, when respiratory diseases increase and the NHS is always under more pressure.

“This would be devastating for business confidence, people’s livelihoods and wellbeing.”

Steve Baker, the CRG’s deputy chairman, questioned how long the country could “fumble along” with restrictions that had such “devastating consequences” for both business and people’s mental health.

And Conservative backbencher Marcus Fysh said the delay was a “disastrous and unacceptable policy”.