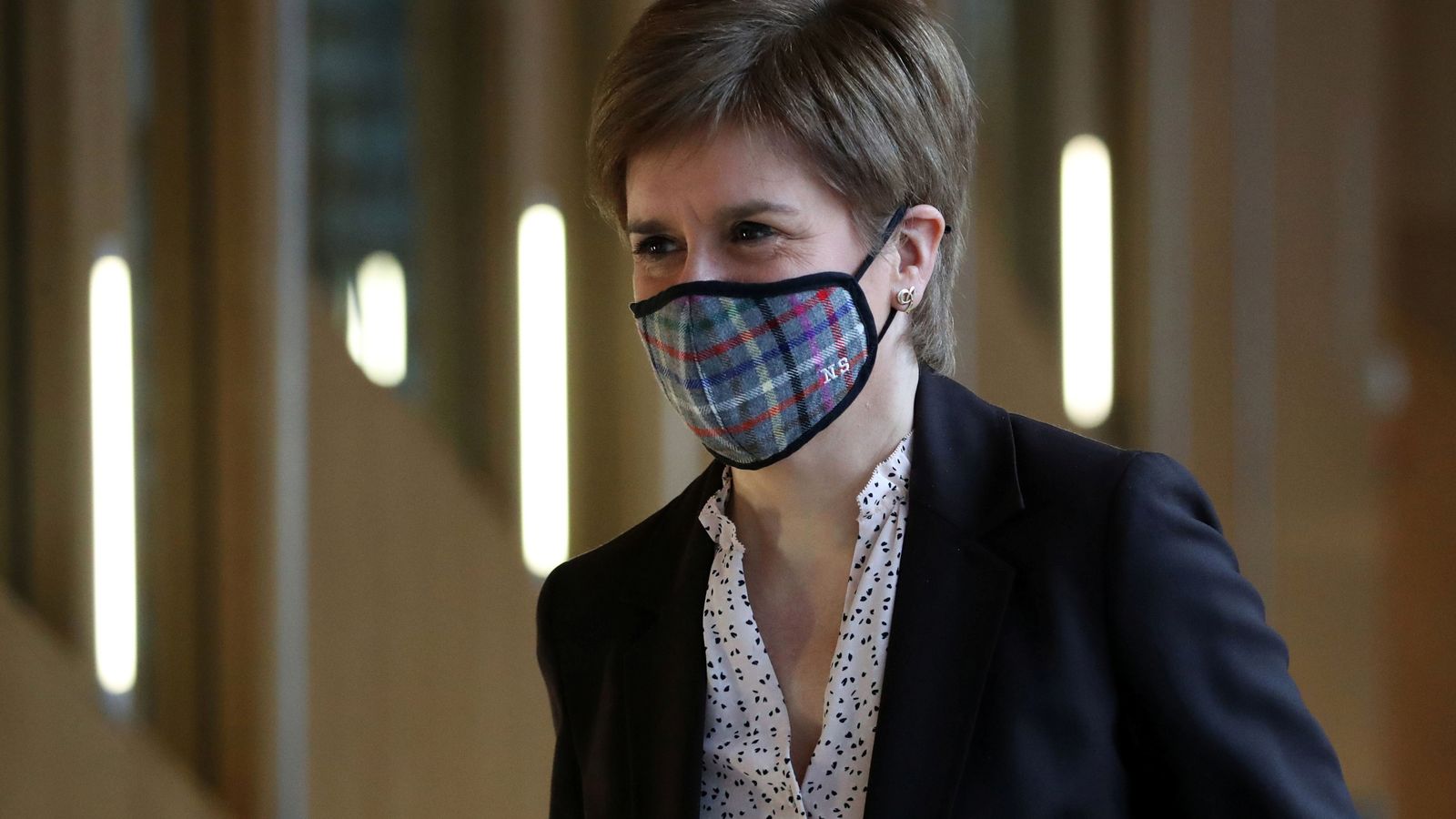 Speaking in Holyrood, Ms Sturgeon did not rule out the further easing of restrictions, but said the Scottish government needed to “buy ourselves sufficient time” to allow the vaccination programme to continue its work.

A three-week delay would allow more people to receive a second coronavirus vaccine amid concerns about rising cases of the Delta variant, the first minister added.

Image: Nicola Sturgeon said cases have increased by ‘more than one fifth’ since last week

The Scottish government had previously expected to move all areas to the lowest level of restrictions, Level 0, on Monday 28 June.

But Ms Sturgeon said the transition is now more likely to happen on 19 July, in line with England.

It comes after a rise in case rates and hospital numbers driven by the spread of the Delta variant, which originated in India.

On Monday evening, Prime Minister Boris Johnson announced a four-week delay to the UK government’s roadmap out of lockdown and said the proposed easing of coronavirus restrictions on 21 June would not go ahead.

Addressing MSPs on Tuesday, Scotland’s first minister said her government too will adopt a “cautious approach”.

“The UK government just yesterday announced a four-week delay to its plans for lifting COVID restrictions in England. The Scottish government too will continue to adopt a cautious approach,” Ms Sturgeon said.

Image: Ms Sturgeon said a three-week delay to lifting restrictions would allow more people to have a second jab

“I have already confirmed today that no changes will be made this week to the levels that apply in any part of the country.

“Our next full, scheduled review of the protection levels will take place next week and this will consider whether any changes are possible from 28 June onwards – the date when we had hoped we would see the whole country move down to Level 0.

“Now, I will confirm our decision to parliament next week following that review.

“However, given the current situation and the need to get more people fully vaccinated before we ease up further, it is reasonable – I think – to indicate now that it is unlikely that any part of the country will move down a level from 28 June.

“Instead, it is more likely that we will opt to maintain restrictions for a further three weeks from 28 June and use that time to vaccinate, with both doses, as many more people as possible.

“Doing that will give us the best chance later in July of getting back on track and restoring the much greater normality that we all crave.”

Shetland, Orkney, the Western Isles and some of the smaller Scottish islands have been in Level 0 since 5 June.

The rest of Scotland is currently in either Level 1 or Level 2.

Up to 200 people can also attend weddings and funerals.

Ms Sturgeon acknowledged that the “unlikely” possibility of further restrictions being eased on 28 June as planned is “difficult and frustrating” for many.

Image: In Scotland’s Level Zero, up to 10 people from four households can meet in an indoor public place such as a pub or restaurant

“We all want to see the back of all restrictions as soon as possible,” she said.

“However, while this setback is not easy, it is worth remembering that we are living under far fewer restrictions now than was the case a few weeks ago.

“The current situation is not what any of us want – but equally it is not lockdown. And vaccination is – with every day that passes – helping us change the game.”

Scottish government figures released on Tuesday indicated the country has recorded two coronavirus deaths and 974 new cases in the past 24 hours.

During her ministerial statement in Holyrood, the first minister said cases have increased by “more than one fifth” since last week and are five times higher than they were in early May.

Image: Nicola Sturgeon said delaying the easing by three weeks would give a better chance of ‘normality’ being restored later in July

On Monday evening, Mr Johnson announced a four-week delay in lifting lockdown restrictions in England to 19 July amid rising cases of the Delta variant.

The PM said the postponement of step four of the government’s roadmap, which was due to take place on 21 June, will allow for more people to receive their second jab before further easing of restrictions takes place.

By 19 July there will be a “very considerable wall of immunity around the whole of the population”, he added.

The proposed extension will be reviewed to see if action can be taken two weeks sooner on Monday 5 July, with MPs getting a chance to have their say on the postponement in a Commons vote on Wednesday.

COVID-19 vaccinations: More than 30 million people in UK have had both coronavirus jabs