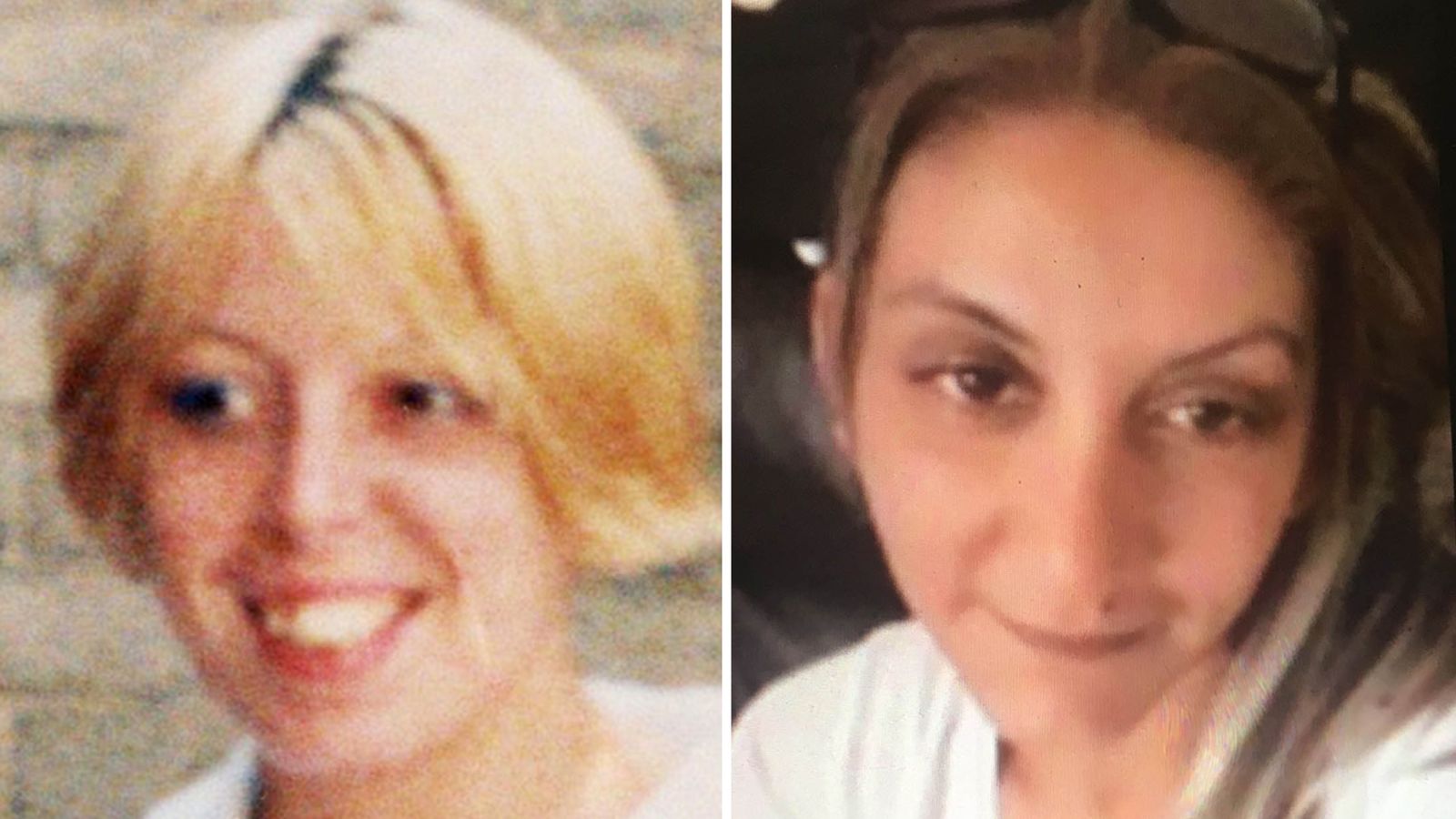 Police around the UK are being asked to look again at unsolved violent crimes after the conviction of a man who murdered two women more than 20 years apart.

Gary Allen has been found guilty of killing Samantha Class in Hull in 1997 and Alena Grlakova in Rotherham in 2018.

He also has convictions for violent offences on two other women in Plymouth in 2000.

Police say his track record of attacks against women raises whether the 47-year-old might have been responsible for further violence.

Image: Gary Allen in the past and in a recent mugshot

Detective Chief Inspector Mark Oughton, who led the investigation into Ms Grlakova’s killing for South Yorkshire Police, said: “We’ve mapped Gary Allen’s movements when he’s been at liberty throughout that period and we’ve worked closely with the National Crime Agency’s analytical section to find out what other offences were in those areas at that time.

“What we’re now going to do is to write to individual forces to make them aware that Gary Allen was in the area at that time and ask them to review any crimes that were in that area at that time.

“Gary Allen’s a very dangerous individual and I think he would have gone on to attack other people if he had not been convicted today.”

At one stage in their investigation into Allen’s offences, Humberside Police were so worried about the danger he posed to women they built a world around him filled with police officers posing as friends, accompanied by their girlfriends and family.

A central plank of the prosecution evidence was Allen’s confession to the murder of Samantha Class to an undercover officer, named in court solely as Ian.

Police released the recording, in which he casually admits to the killing, on their YouTube channel.

Allen had been cleared of the murder of Ms Class following a trial in 2000 but this acquittal was overturned in 2019 by the Court of Appeal in light of a wealth of new evidence.

After a new trial at Sheffield Crown Court, Allen was found guilty on Thursday of murdering Ms Class and Ms Grlakova by a jury which deliberated for two days.

Ms Class’s body was found 24 years ago by children on the banks of the Humber in North Ferriby.

She had been “brutally murdered”, prosecutors said, and a pathologist found she had been stamped on, strangled and run over with a car before her body entered the water.

The 29-year-old had been a sex worker at the time of her death and left three children – Sophia, Aiden and Lewis.

Ms Grlakova’s body was found naked in a stream in Rotherham in April 2019, after the 38-year-old was last seen on Boxing Day 2018.

Image: Alena Grlakova’s remains were discovered in a dried-out stream bed in Rotherham, in April 2019

She moved to the UK in 2008 after being born and brought up in Slovakia.

The court was told Alena had hit “a low point in her life” shortly before her murder which had led to her working in the sex industry.

Just months after Allen was originally cleared of murdering Ms Class in 2000 he attacked two sex workers separately in Plymouth and was then convicted of both assaults.

In 2002, he told probation officers about his dislike of sex workers and women in general.

In 2010, Humberside Police launched an undercover operation to assess the threat posed by Allen.

It was during this operation that “Ian” befriended Allen, who told the undercover officer about an encounter with a sex worker who got angry with him.

Allen told Ian: “So I strangled her and dumped her in the Humber.”

Allen claimed not to have killed either of the women and said any confessions he made to “Ian” about killing Ms Class were only because he told him what he thought he wanted to hear.

Image: Samantha Class’s body was found in 1997 on the banks of the Humber at North Ferriby. File pic: Google

On Wednesday, Allen will be sentenced.

Mr Justice Goose told Allen: “You should prepare yourself inevitably for a life sentence, I will determine the details of that next week at 2pm.”

A statement by Alena Grlakova’s husband, Viliam Grlak, read out on behalf of friends and family by DCI Oughton, said: “The verdict will not reduce the pain and suffering that we have had to endure since Alena was so cruelly taken from us but it does give us the justice that we hoped to achieve.”

Ms Class’s daughter, Sophia, said outside court: “Gary Allen may have his sentence, but my family and I have and will continue to suffer the bigger sentence. I can never have my mother back, I have got to live with that and there will always be a break in my heart, but at least for us all there are no more questions.

“Samantha was a daughter, sister, aunt, and a mum. A very loving mum. Sammy to her friends.

“She imprinted on everyone’s heart who met her. Because of Gary Allen, my mum violently and brutally lost her whole life and our lives were turned upside down. Our family unit was broken into pieces, and so many memories as a family taken away in one night.”

Image: A boot from the scene where Samantha Allen’s body was found. Pic: Humberside Police

Before 2003, it would not have been possible to retry Allen for Ms Class’s murder because of double-jeopardy laws, which prevented people going to court for a murder for which they had been acquitted, but the law was changed.

After Ms Class’s murder, police found a match to DNA recovered from her body and clothing and a routine sample taken from Gary Allen when he was stopped by the police on suspicion of drink driving in 1998.

But while Allen admitted in a police interview to having sex with her, he denied her murder.

In many cases where double jeopardy prosecutions are successful, it is the discovery of a body or subsequent link to DNA that proves key, but in the latest prosecution of Allen for Ms Class’s murder, that wasn’t the case.

For a double jeopardy prosecution to go ahead, the Director of Public Prosecutions (DPP) has to give consent to any police re-investigation of someone who has been acquitted.

The DPP also has to approve any attempt to go the Court of Appeal to ask judges to quash an acquittal.

In Gary Allen’s case, the current DPP Max Hill QC personally took the evidence to the Court of Appeal and outlined his pattern of offending, his comments to probation officers and the recordings made by the undercover officers.

The court also heard about Alena Grlakova’s murder, including evidence that Allen had threatened her on the last night she was seen alive.