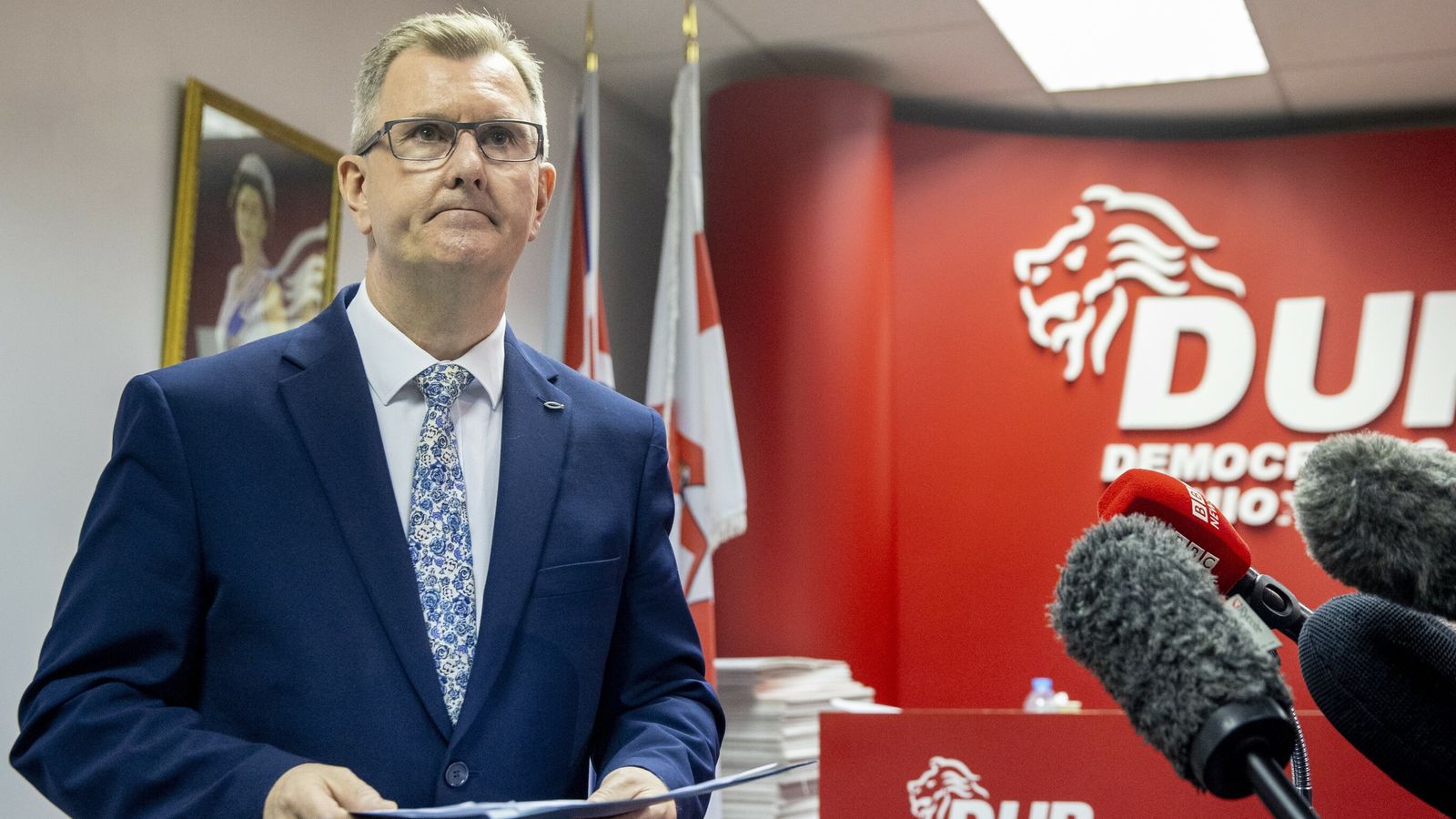 Sir Jeffrey Donaldson is the next leader of the DUP – the party’s third in the space of two months.

A leadership vote had been scheduled for Saturday, but the Lagan Valley MP was the only candidate when nominations closed.

Sir Jeffrey, 58, succeeds Edwin Poots, who narrowly defeated him in the contest triggered by the ousting of Arlene Foster.

But Mr Poots was himself ousted after 21 days in post for nominating a first minister against his party’s wishes.

DUP MPs and Assembly members were reluctant to commit to power-sharing unless the government addressed concerns about the Brexit Protocol.

Mr Poots told Sky News he had nominated a first minister because being in devolved government gave the party “leverage”.

Paul Givan, the first minister designated by Mr Poots last week, is expected to resign in a matter of days.

Unionist fury over the border in the Irish Sea has now cost both Arlene Foster and Edwin Poots their leadership.

Image: Arlene Foster was replaced by Mr Poots in June after she resigned

Sir Jeffrey is unlikely to commit to sharing power with Sinn Fein without some movement on the Northern Ireland Protocol.

In a statement, Sir Jeffrey said: “The Northern Ireland Assembly is the place where every element of our society is represented. The coalition government is unwieldy, but it ensures every voice is heard.

“Such partnership is how we should move forward. It must be based on respect for each other’s mandate.

“To that end, I will be speaking with the prime minister at the earliest opportunity to emphasise that it is not realistic to expect stability when every unionist representative in the devolved institutions opposes the Northern Ireland Protocol.

Image: Sir Jeffrey said the government and Brussels must step up and see the flaws in the Protocol

“The government and those who claim to be protectors of peace and stability, must step up and deal with the Protocol in a manner which respects the constitutional and economic integrity of the United Kingdom.”

He added that he wants to “bring stability and encourage everyone to focus on what unites us as a people rather than on what divides us.

“There has been too much focus on division and recrimination both within unionism and within Northern Ireland.

“I will play my part but the government and Brussels must step up and recognise the flaws of the Protocol and how it was foisted upon Northern Ireland.”

The Protocol established a trade border between Northern Ireland and Great Britain to avoid one on the island of Ireland.

Twice, the UK government has unilaterally extended the grace period before some checks are required and could do so again.

Mr Poots claims he “received assurances” from the Northern Ireland Secretary Brandon Lewis there would be “significant changes” in July.

He told BBC Radio Ulster the government had “promised” a significant “win” for Unionists, but he “doesn’t have the detail”.

Sir Jeffrey will almost certainly demand the fine print before re-committing the DUP to power-sharing with Sinn Fein at Stormont.

But others say Unionists should be highlighting the economic benefits of Northern Ireland’s to both the EU and GB markets.

Euro 2020: Why no Scotland players have to isolate after Gilmour contracts COVID