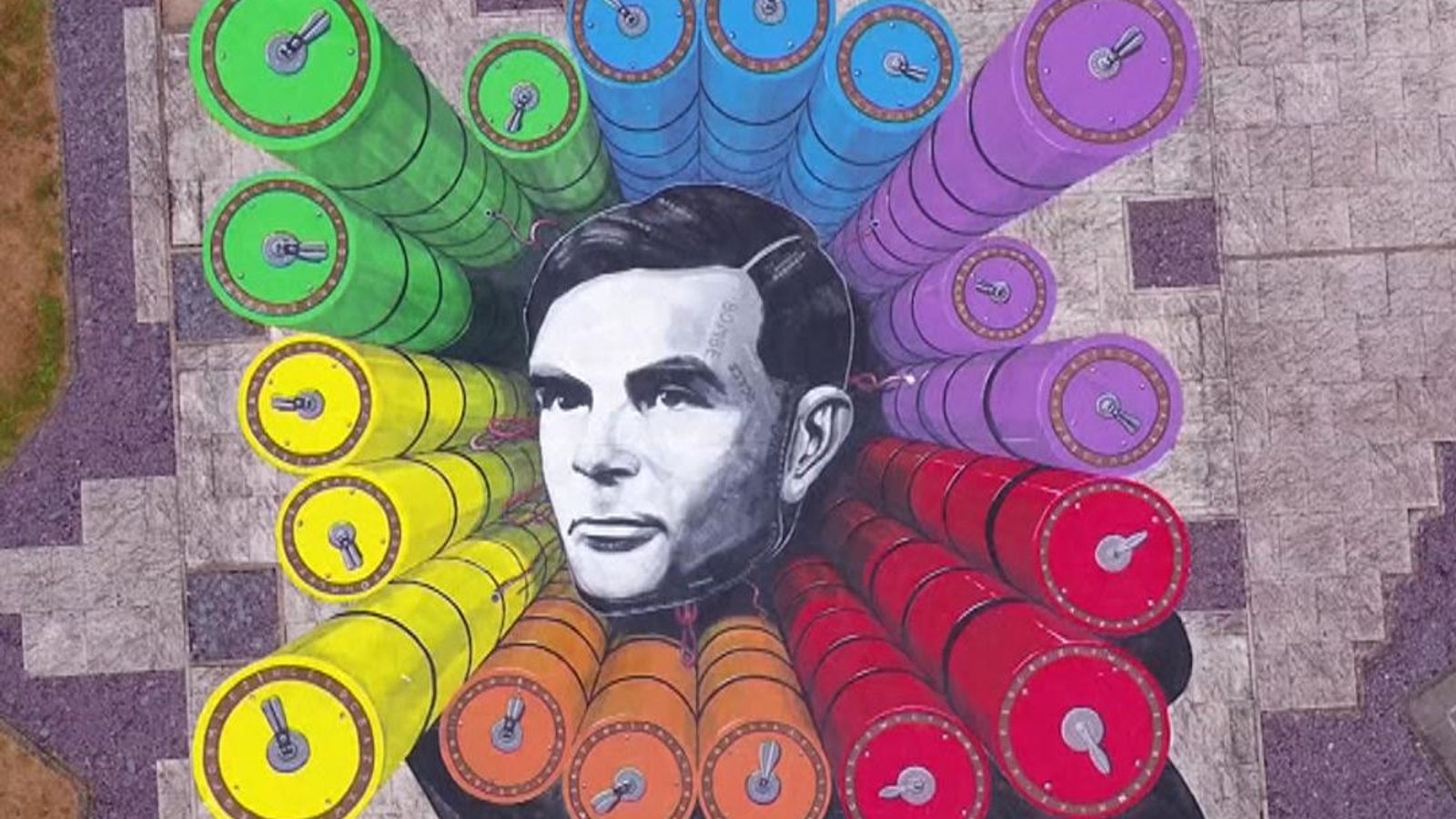 The Alan Turing £50 banknote has begun to enter circulation – as a giant artwork of the wartime hero has been installed at the heart of GCHQ.

The new polymer Bank of England note depicting the famed mathematician, who is often considered to be the father of computer science, will be issued on Wednesday, coinciding with his birthday.

Marking the occasion, a 10-metre by 10-metre rainbow canvas inspired by the LGBT Pride flag has been unveiled at the centre of the GCHQ hub in Benhall, Gloucestershire – known as the doughnut.

Mr Turing played a pivotal role in cracking the Enigma code during his time at Bletchley Park in Buckinghamshire – GCHQ’s wartime home – which is thought to have shortened the Second World War by at least two years, saving millions of lives.

Used by the German armed forces to send messages securely, the Enigma enciphering machine was believed to be unbreakable, but the first wartime messages were cracked in 1940.

The artwork, created by 3D artist Joe Hill in collaboration with GCHQ’s Pride network, features Mr Turing inside the wheels of the British Bombe – the machine he designed to crack the Enigma code – and lies flat facing the sky.

It also contains 15 hidden codes for viewers to decipher, and will later be donated to organisations chosen by GCHQ’s Pride Network.

Image: Unveiled on Turing’s birthday, the work at GCHQ was created by 3D artist Joe Hill and features 15 hidden codes

GCHQ director Sir Jeremy Fleming said: “Alan Turing was a genius who helped to shorten the war and influence the technology that still shapes our lives today.

“He was embraced for his brilliance but persecuted for being gay.

“Turing’s legacy reminds us every day that diversity is essential and inclusion is mission critical to our organisation.”

He added: “Turing was and remains a beacon of hope for all who dare to live and think differently.”

Born on 23 June, 1912, Mr Turing studied mathematics at King’s College, University of Cambridge. He gained a first-class honours degree in 1934 and was elected a Fellow of the College.

His 1936 work On Computable Numbers is seen as giving birth to the idea of how computers could operate.

His “Turing test” also explored the behaviour necessary for a machine to be considered intelligent and became the foundation for artificial intelligence.

But the mathematician’s later life was overshadowed by a conviction for homosexual activity, which was later considered unjust and discriminatory.

Image: Governor of the Bank of England Andrew Bailey holds up the new £50 note

Celebrating Mr Turing’s life, the Bank of England was also flying the Progress Pride flag above its building in London’s Threadneedle Street on Wednesday.

The new polymer £50 note contains advanced security features and joins the Sir Winston Churchill £5, the Jane Austen £10 and the JMW Turner £20 – meaning all Bank of England banknotes are now available in polymer.

Speaking at Bletchley Park, Bank of England Governor Andrew Bailey said: “Our banknotes celebrate some of our country’s most important historical figures.

“That’s why I am delighted that Alan Turing features on the new polymer £50 note.

“Having undertaken remarkable codebreaking work here at Bletchley Park during the Second World War, he went on to pioneer work on early computers, as well as making some groundbreaking discoveries in the field of developmental biology.

“He was also gay and was treated appallingly as a result. Placing him on this new banknote is a recognition of his contributions to our society, and a celebration of his remarkable life.”