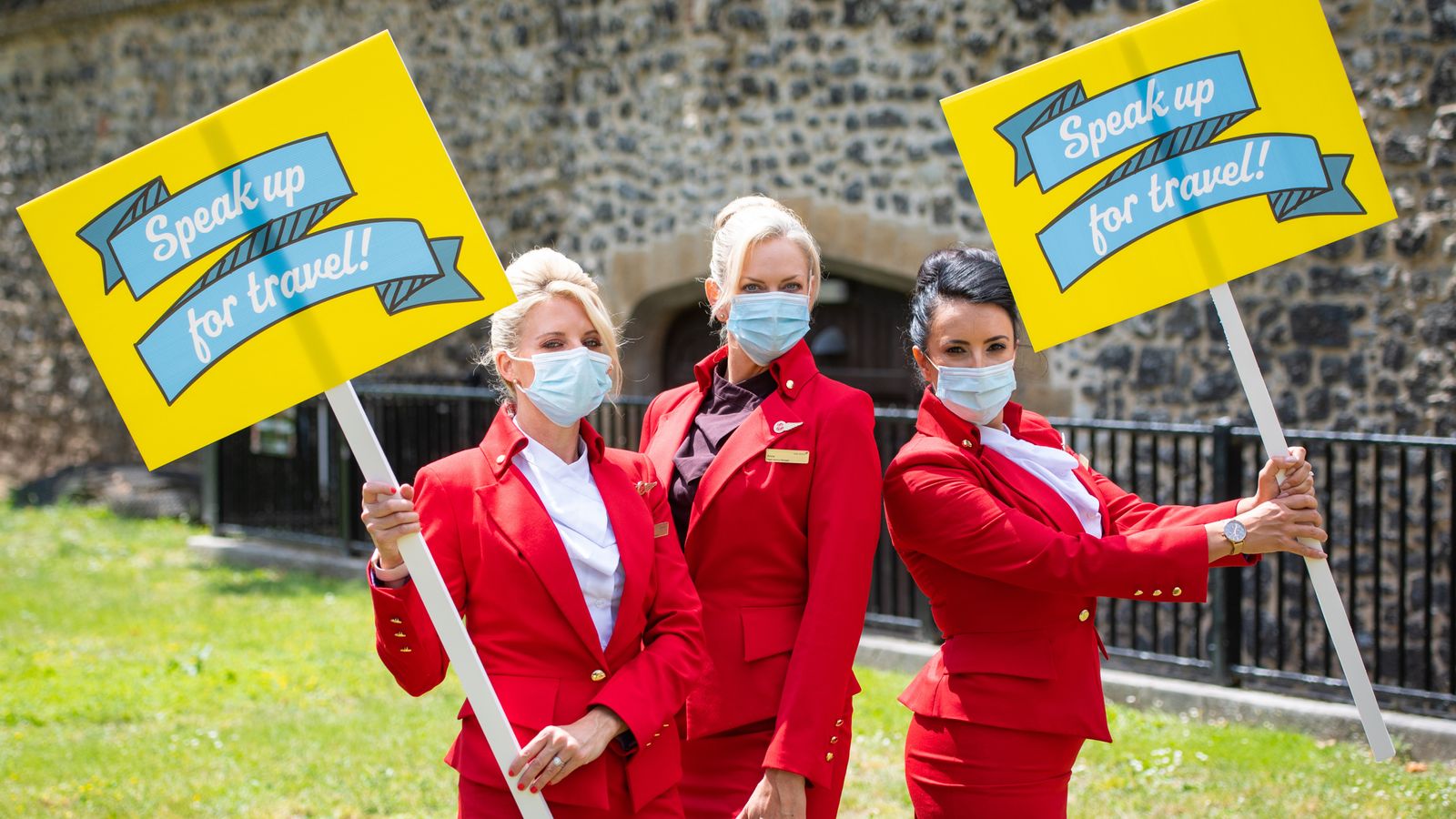 The UK’s travel industry is holding a day of action to put pressure on the government to reopen the sector and give more financial support to businesses.

Industry body ABTA estimates that 195,000 travel jobs have been lost or are at risk as a result of the COVID pandemic.

Ministers have been accused of failing to deliver a restart to travel by “undermining” the UK’s travel traffic light system.

Image: Spain is one of the tourist hotspots currently on the UK’s amber travel list

There are no viable major tourist destinations on the quarantine-free green list, and the government has urged people to avoid holidays to locations on the amber list.

Several hundred people, including pilots, cabin crew and travel agents, have gathered to protest outside the Houses of Parliament.

Meanwhile 200 will meet at an event in Holyrood, Edinburgh, 100 will assemble in Belfast, and a virtual meeting will take place for campaigners in Wales.

The day of action is aimed at persuading the government to expand the green list, and remove testing and quarantine requirements for fully vaccinated travellers returning from green and amber locations.

Tim Alderslade, chief executive of Airlines UK – a trade body representing UK carriers, said: “It is now or never for the government to reopen travel and save what is remaining of the summer season, not just for families desperate to get away but the tens of thousands of jobs which rely upon this once thriving sector.

“Airlines are at the absolute limit of what they can borrow and without a genuine reopening this summer they will require government support to survive.”

Media minister John Whittingdale said he hoped the government would be able to put more countries on the green list of travel restrictions later this week.

Mr Whittingdale told Sky News the list would be reviewed “later this week to make revisions to the green list, and I hope that we can put more countries on to it”.

But he urged people to go on holiday in Britain.

“You can have a great holiday in Britain and I think a very large number of people will decide this year that that’s what they will do,” he said.

“Having said that, people like to get away to the sun and there are a number of countries on the green list, and hopefully it will be possible to increase that number.”

It is understood the government is scheduled to update its travel lists on Thursday, before a “checkpoint” review of the rules for each tier takes place on Monday.

No quarantine for ‘important people’

The legal bid is an attempt to get the government to be more transparent in relation to how it determines which countries are on the green, amber and red lists.

The Confederation of British Industry’s boss has also urged action, saying the UK “can’t be first on vaccines, yet last on reopening international travel”.

Lord Bilimoria said the country risked being left behind on reopening travel.

“We must build on the success of the vaccine programme by removing quarantine restrictions for those who are protected,” said the CBI president.

“And to make better use of the green watch-list, avoiding last-minute surprises of countries shifting from green into amber.

“The government should take a truly risk-based approach with greater transparency on how nations are classified in the traffic light system.”

“Decisions on traffic light allocations take into account a range of factors including genomic surveillance capability, transmission risk and variants of concern, with data behind decisions to move countries on the list published online.

“We keep all measures under review and continue to engage with industry and international partners to explore how we can open international travel safely. Both tailored and wider economic support is still available to the sector, including the furlough scheme.”