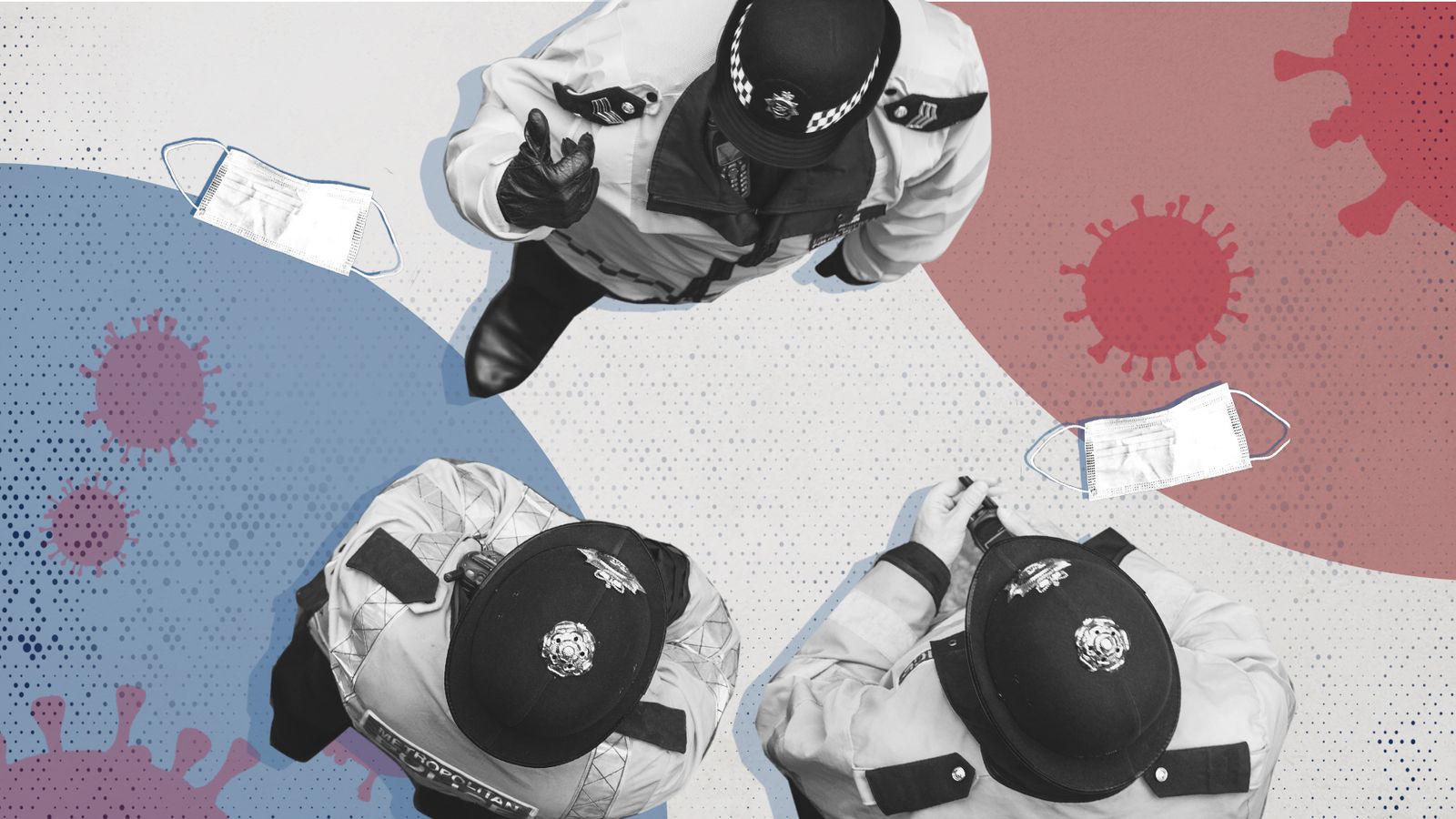 More than 160 police officers in the UK have been caught breaching coronavirus restrictions during the pandemic, Sky News can reveal.

One police constable failed to self-isolate despite having COVID symptoms, while several officers were fined for attending parties that broke lockdown rules.

At least 167 officers were found to have breached coronavirus restrictions since March 2020 – but the actual number is likely to be much higher as nearly half of UK police forces failed to say how many had flouted the measures.

A further 35 members of police staff, who do not work as officers, were also found to have breached the regulations, according to data released under the Freedom of Information Act.

The National Police Chiefs’ Council (NPCC) told Sky News that “nobody is above the law” and when officers have broken rules “it is right that they are held to account”.

Image: Nurse Karen Reissmann was fined £10,000 by police for staging a protest over NHS pay

Nurse Karen Reissmann, who is challenging a £10,000 fine issued by police for staging a protest over NHS pay in Manchester, said the number of officers caught breaching COVID restrictions was “shocking”.

“It’s their job to enforce those rules,” she told Sky News.

“If the police don’t understand the rules, or think they don’t apply to them, that’s quite worrying.”

Ms Reissmann said “it reduces the credibility” of officers issuing COVID fines if they or their colleagues are not abiding by the restrictions themselves.

“Some of those (breaches) are clearly high-risk activities that potentially increase the spread (of the virus),” she added.

Just 27 police forces out of 45 across the UK and British Transport Police (BTP) provided details about their employees’ COVID rule breaches.

Britain’s biggest force, the Metropolitan Police, West Yorkshire Police and the Police Service of Northern Ireland (PSNI) were among those failing to respond.

Search the table below to find out how many police officers breached COVID restrictions in your area.

The highest-ranking officer to have broken COVID restrictions was an inspector at Avon and Somerset Police, followed by several sergeants across different forces.

Among the COVID rule breaches:

• Devon and Cornwall Police said 20 constables, a sergeant and six other members of staff were found to have broken the rules. They included 12 breaches for attending unauthorised gatherings and three for failing to self-isolate while awaiting the result of COVID tests

• Police Scotland said 21 officers were found to have breached restrictions, including 17 officers who attended unauthorised social gatherings and four officers who failed to self-isolate despite being told to by NHS Test and Trace

• BTP said a constable failed to self-isolate when displaying COVID symptoms in January, and another officer broke the rules with an overseas trip during the national lockdown in February

• Merseyside Police said four officers attended parties that broke lockdown rules, and another officer was fined for going to a party when they should have been quarantining

• Avon and Somerset Police said an officer “openly breached COVID-19 laws by going to a party”, and a member of police staff posted a message on social media “openly breaching” COVID government guidelines in May 2020

• The same force said a member of police staff was given a written warning after “knowingly breaching coronavirus legislation” in May 2020. The employee was “not honest to police officers and failed to act with self-control, respect and courtesy towards a member of the public”

In total, 204 police staff members were found to have breached COVID restrictions, according to data from 28 forces, including Leicestershire and West Midlands which did not reveal the roles of two employees who broke the rules.

Sussex Police also failed to provide details of COVID breaches by staff, despite reports that a group of officers were under investigation after being found at an unauthorised party in May.

Police in England and Wales have issued more than 115,000 fines for breaches of coronavirus restrictions up to 16 May this year.

They included 344 fines of £10,000 for holding large gatherings including unlicensed music events and protests, according to the NPCC.

An NPCC spokeswoman said: “The vast majority of police officers and staff have worked tirelessly over the past 14 months to ensure that everyone is aware of and follows the coronavirus restrictions.

“Throughout this pandemic we all have a responsibility to adhere to rules put in place to protect public health.

“Nobody is above the law and where there have been instances of officers and staff breaking these rules, it is right that they are held to account.”