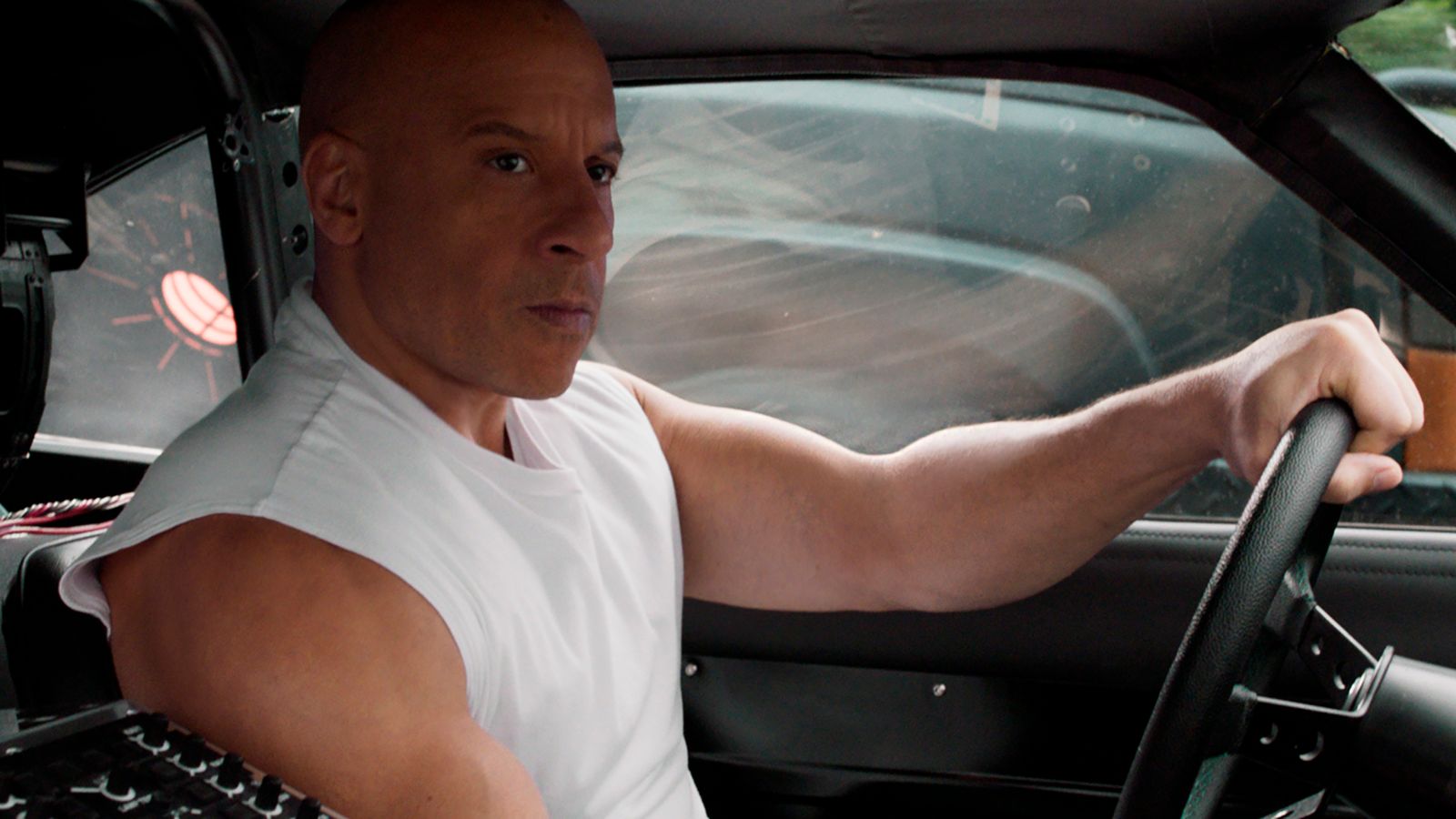 It starts with Vin Diesel’s Dominic Toretto retired and seemingly happy enough living the quiet life – but it’s not long before we’re thrown into an epic chase and a fire is reignited in the iconic character.

Marking 20 years since the first Fast & Furious film and the return of director Justin Lin – the man behind four films in the franchise including the 2006 Tokyo Drift spin-off – Fast & Furious 9 (F9) looks to tie the films together as it welcomes back some of the most-loved characters from the series.

And it’s not just the old faces taking centre stage. Wrestling legend John Cena is brought to the fore playing Toretto’s little brother Jakob, as the ninth instalment brings family to the heart of the story once more and delves into the past of Dom, the street-racer-turned-international-vigilante.

Diesel, 53, speaks of a feeling he sensed from a former co-star when Cena, 44, was chosen to help portray the “broken brotherhood” at the core of the film.

He tells Sky News over Zoom: “It sounds almost unbelievable – but I felt like Pablo [Diesel’s nickname for the late Paul Walker] had sent him in to play Jakob, and the rest is history.”

Image: Diesel (right) says Walker (left) was an ‘angel’ and the ‘soul of this whole franchise’. Pic: AP

Despite Walker’s death in a 2013 car crash in California, his character Brian lives on in the Fast & Furious world and the writers have made sure there’s a nod to the star, who shot to fame alongside Diesel in the first film.

“You know, he [Walker] loved being Brian,” says Diesel.

“I guess there’s not a lot we can control in this life but if we can preserve that character – that’s what we can do and it’s in honour of my brother, in honour of this angel that is the soul of this whole franchise, so I couldn’t imagine doing it any other way.”

“It’s remarkable, it’s like it’s generational – it’s truly multi-generational,” he says. “People that came to see this movie 20 years ago are now bringing their families to see the movie – that’s such a great feeling.

“I’m so blessed and honoured to be a part of a franchise that brings families together and that represents this multi-generational fanbase – it’s awesome.”

And he says he still loves to play Dom Toretto, two decades in.

“I am lucky to have a studio that’s willing to evolve the character,” he says.

“Who would’ve thought we’d be looking at this outlaw 20 years ago and now watching him put his kid to sleep – it’s a testament to the willingness for the studio to truly evolve these characters while allowing us to have fun with the spectacle, to warrant it being a true crowd-pleaser.”

Image: F9 welcomes back some of the most-loved characters of the series. Pic: AP

F9 does not disappoint when it comes to spectacle, pushing the boundaries with intricate action sequences and quite literally out-of-this-world stunts as the team attempts to save the world.

Nathalie Emmanuel, who plays Ramsey, the British hacktivist and brains of Dom’s operation, says her character was also forced to step out of her “comfort zone” and get in on the action.

And the former Hollyoaks and Game Of Thrones star, 32, says she was “immediately aware” of all the strong women characters in F9.

“I mean obviously, historically, we’ve had such cool women in these films anyway but that female voice has really grown with each film,” she tells Sky News.

“And there was just one day I think there was like – in terms of main cast – there was four of the guys and four of the girls and it was like, ‘oh wow, I don’t think there’s ever been sort of equal numbers’, and I just thought that was amazing and we just kind of stood in a row and I thought, ‘oh my God, we’re like the coolest girl gang ever’ and I just loved it so much.

“And obviously [there are] other characters that are in these movies that are so iconic, like Charlize Theron and Helen Mirren, you know as a fan and as an actor who looks up to these women – and everyone that I work with – I’m just like ‘ah yes’ – it’s just made me a bit giddy to be honest.”

Emmanuel, who also starred in 2017’s The Fate Of The Furious (or F8), says the journey from British soaps to Hollywood stardom has been “surreal” and “hard to articulate”.

“I just feel really excited and just grateful and you know – it’s been a really long journey and a lot of hard work and I guess I’m kind of proud of myself as well,” she says.

The actress, from Southend in Essex, says there’s been “incredible talent” from Britain possibly being “overlooked” in the UK industry, causing many to seek success in the US, with “more opportunities” to reach big audiences.

She says: “I wasn’t necessarily getting opportunities in the UK and I thought let me just try [working in the US] – and wow, it was kind of the best decision I made really.”

Image: Lin (centre) says the opportunity to tell Toretto’s backstory lured him back to the franchise. Pic: AP

Director Lin, who co-wrote the screenplay with Daniel Casey and chose the UK for some of the film’s key scenes, says there was a “conscious effort” to “totally treat it [F9] in a way that we’ve never done before”.

“We never want to take for granted that a lot of the times when we make these big budget movies and you’re successful, I think there’s a tendency to kind of do the same thing over and over,” the 49-year-old tells Sky News. “For us to be able to try something new, it’s exciting and it’s scary and it should be.”

He adds: “It felt like an organic process as we’re going into, I think our final chapter. We wanted to take a moment to really kind of push ourselves on this one tonally, I think even in how we approach action before we go into the next chapter – or the last chapter.”

Lin says the opportunity to tell Toretto’s backstory lured him back to the franchise.

He says: “I think the idea of exploring the theme of family, but through blood, was something that hasn’t been done in the last eight chapters and to be able to do a ninth of a franchise and do something new, it’s exciting.

“And for me, the opportunity to go back and to be able to really kind of dig into the mythology… that was the two reasons for me to come back.”

Image: The film delves into the past of Dom Toretto, the street-racer-turned-international-vigilante. Pic: AP

F9 is playfully self-aware of past films and the franchise – and makes references as part of the plot and in moments of light relief.

“I think me being away helped and I felt like for the first time, on the ninth chapter, I feel like we’ve earned at least this chapter to be self-aware,” says Lin. “Not breaking the fourth wall self-aware but the idea that at some point I feel like our characters need to at least talk about what’s happened before.

“And so I think this was definitely a unique situation that I felt, again, let’s try something that we haven’t done before and really hopefully use it in a way that we can, at 20 years, kind of celebrate and pick this moment and embrace how far we’ve come.”

Image: Emmanuel (left) says she was ‘immediately aware’ of all the strong women characters in F9. Pic: AP

Speaking about the effect of the COVID pandemic, Lin says he was “very fortunate” Universal decided to push back F9’s release, adding that “they understood why we make these movies”.

“I’m lucky enough to make TV shows, smaller movies, and a lot of those I feel like ‘great’, you want to watch it on a tablet, I think that’s great, however you want to enjoy it,” he says.

“But we do make a special effort when we make these movies – it is for the big screen, so that hopefully everyone can go to the cinemas with their family and friends and connect.

“Maybe they can laugh together, and cheer together and just escape for a couple of hours. I think that’s special and I hope that never gets lost.”

Fast & Furious 9 is in cinemas now