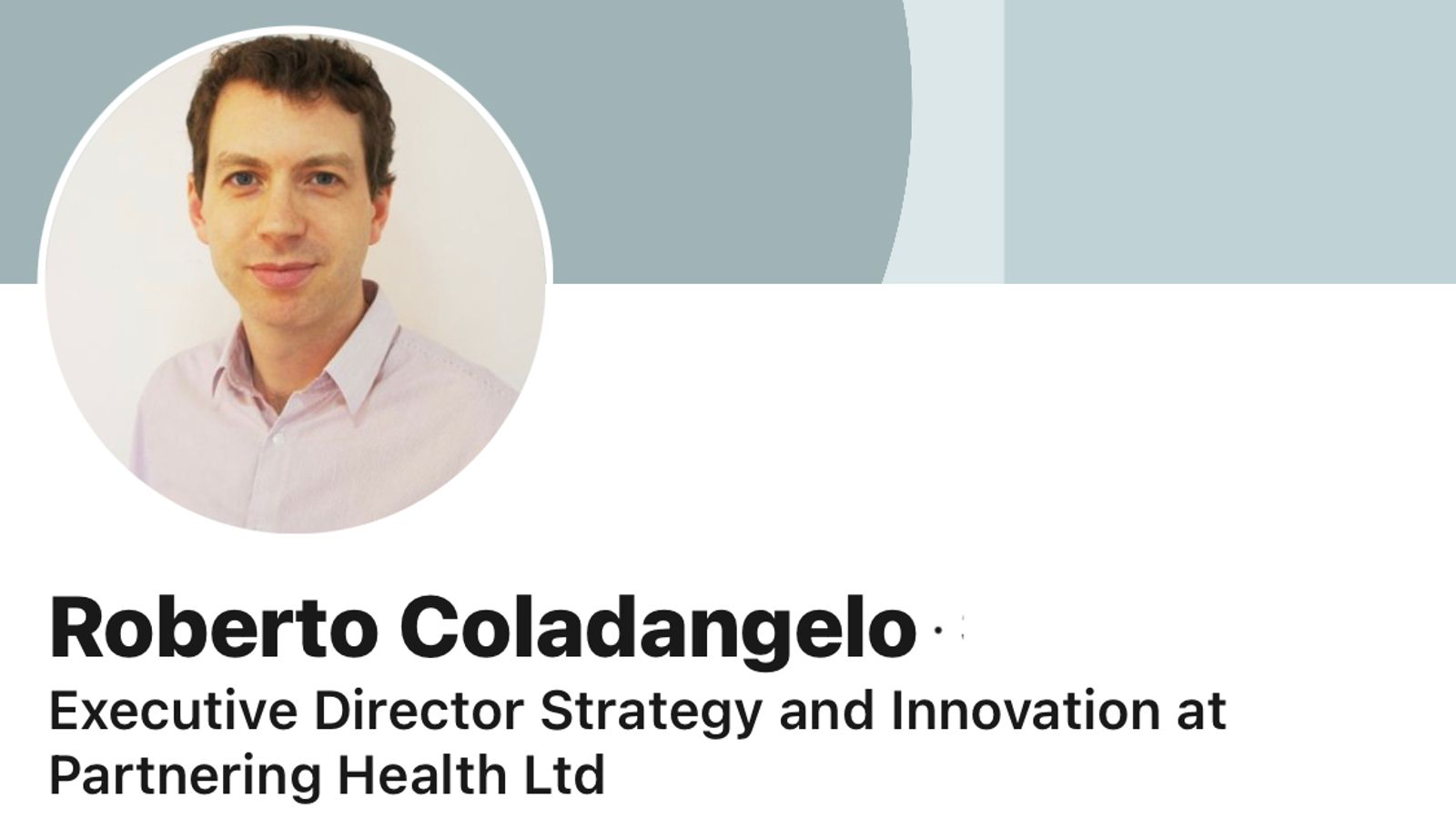 A relative of the Whitehall director alleged to have had an extramarital affair with Matt Hancock, the health secretary, is an executive at a private healthcare company which has won a string of NHS contracts.

Sky News can reveal that Roberto Coladangelo – who is Gina Coladangelo’s brother – works at Partnering Health Limited (PHL Group), a specialist in the provision of urgent and primary care services to NHS patients.

The disclosure risks deepening the crisis engulfing Mr Hancock, who has already been left weakened by allegations about his competence at tackling the COVID-19 pandemic in recent weeks made by Dominic Cummings, Boris Johnson’s former adviser.

Mr Hancock has also become embroiled in several conflicts of interest scandals relating to coronavirus contracts, including one involving the former landlord of the health secretary’s local pub landing a deal to produce COVID test vials.

In February, a judge ruled that Mr Hancock’s department had acted unlawfully by failing to reveal details of pandemic-related contracts in a timely fashion.

People who know Mr Coladangelo said that he and Mr Hancock’s aide were siblings, and social media profiles and electoral roll data appear to confirm a relationship between them.

None of those contacted by Sky News on Friday afternoon would confirm or deny the relationship between the Coladangelos.

Mr Coladangelo is PHL Group’s executive director of strategy and innovation, and has worked there since October 2019, according to his profile on the networking app LinkedIn.

He previously founded Youla, an elderly care business, but prior to that was a marketing executive in the sports and gaming industries.

PHL Group describes itself on its website as “an independent healthcare company providing services and quality solutions to the NHS and private healthcare partners”.

Its website also discloses the provision of “COVID-19 services”, although it is unclear whether the Department of Health and Social Care (DHSC) was the awarder of contracts relating to these.

The Sun’s revelation of Mr Hancock’s personal relationship with Ms Coladangelo, who is a non-executive director at the health department, prompted calls on Friday for him to be sacked because of his apparent breaches of lockdown restrictions.

Mr Hancock said he had “let people down” and was “very sorry”, with Boris Johnson saying he considered the matter closed.

However, any suggestion of further conflicts of interest relating to the awarding of public health contracts would risk damaging not only Mr Hancock.

The prime minister has also been trying to move on from the recent row over the refurbishment of his Downing Street apartment.

Ms Coladangelo is reported to have known Mr Hancock since their university days, and joined the DHSC board less than a year ago.

Whitehall departments’ boards are chaired by their secretary of state, with many of the non-executives now handpicked by ministers based on previous connections.

There was no suggestion on Friday that PHL Group or Mr Coladangelo had acted improperly in the procurement of government contracts.

Neither the value of PHL Group’s NHS contracts or the timing of their award could be verified on Friday.

A person close to the situation said that PHL had been providing services to the NHS since it was established 11 years ago, and that contracts awarded by the NHS followed the relevant procurement rules.

Mr Coladangelo did not respond to an emailed request for comment.

He is understood to be participating in a cross-country bike ride to raise funds for charity.

A page on the fundraising site JustGiving confirms that Mr Coladangelo received a donation from “Gina [and] Olly” – Oliver Tress is Ms Coladangelo’s husband – with a further donation made by a couple who are understood to be the Coladangelos’ parents, Heather and Rino.

Ms Coladangelo could not be reached for comment, while a DHSC source insisted that the Secretary of State had no involvement in awarding NHS contracts.

A spokesperson for PHL said: “PHL has been operating for over 11 years and at all times has secured contracts through the robust tender and procurement processes put in place by local Clinical Commissioning Groups (CCGs).

“At no time have any contracts been awarded outside of these rigorous processes and no contracts have ever been awarded by the Department of Health and Social Care.”

COVID-19: Dominic Cummings warned PM government could be ‘negligently killing most vulnerable’ with lack of testing in May last year

Matt Hancock ‘affair’: Controversy over aide Gina Coladangelo will not go away easily despite No 10 trying to shut it down