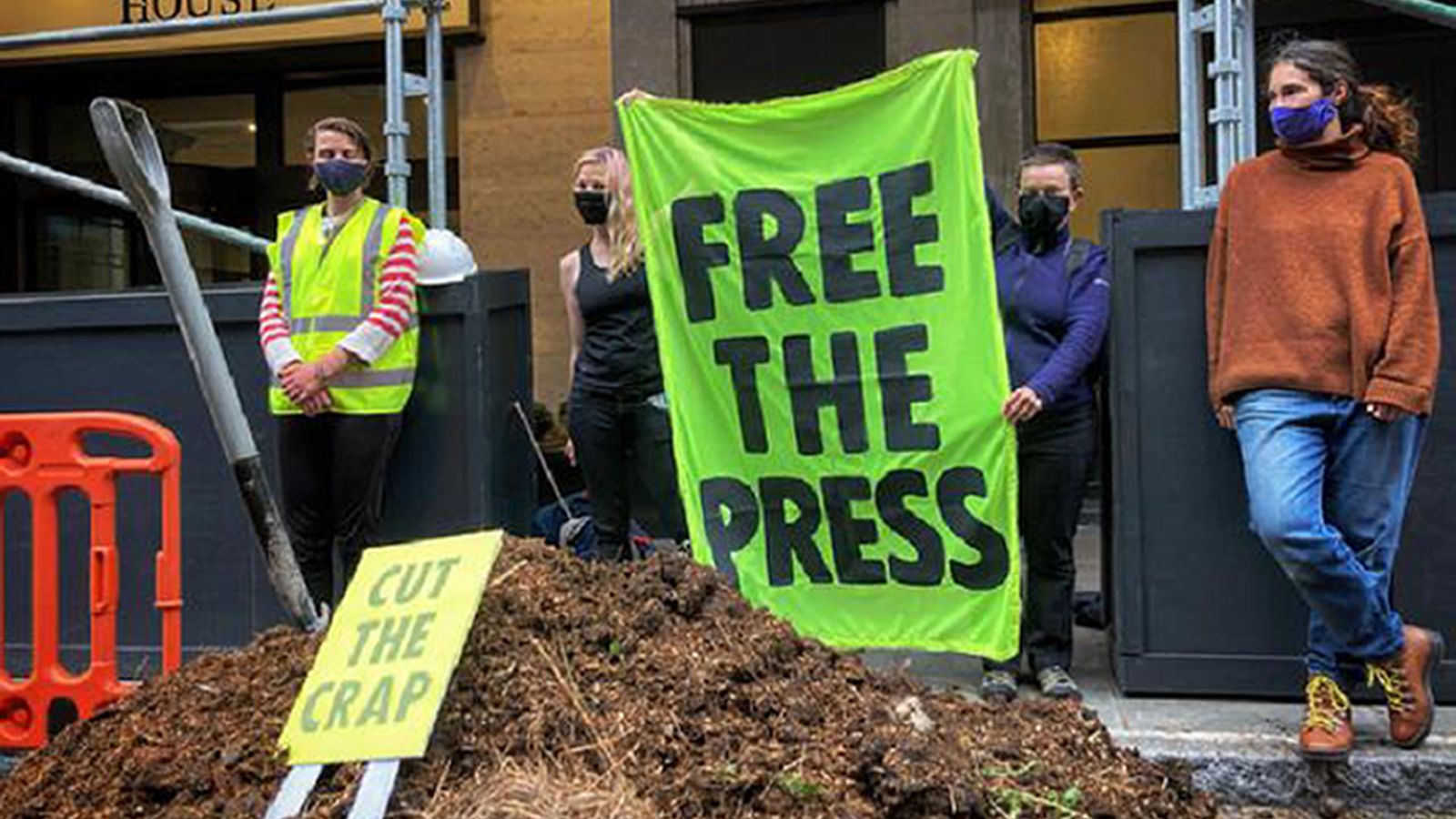 Hundreds of Extinction Rebellion (XR) protesters have marched through London in a demonstration aimed at the British press.

The Metropolitan Police said 23 people were arrested during the rally, including a handful who were involved in seven tonnes of horse manure being dumped outside the Daily Mail offices in Kensington, central London.

Five people were arrested for an offence under Section 148 of the Highways Act, with four of them also arrested on suspicion of causing criminal damage.

The Met also said a 54-year-old man attempted to empty manure from another truck on to the pavement outside a commercial premises in Buckingham Palace Road, Victoria, at around 8am.

Image: The demonstration was aimed at the British press

The environmental campaigners say a small number of billionaires control the vast majority of UK newspapers and are little more than establishment mouthpieces who have failed to take climate change seriously.

XR co-founder Dr Gail Bradbook told Sky News: “When the power of the press is held in the hands of too few, we don’t have a functioning democracy.

“This is a serious problem. We are running out of time, and the press isn’t holding the government to account.”

Their march took them from Parliament Square and along the south side of the Thames, ending at The Shard building, home of Mr Murdoch’s News UK.

News UK titles include The Sun and The Times, among others.

Activist Gully Bujak told Sky News that XR are not advocating to shut down the press but to insist the concentration of ownership amongst a few wealthy men be changed.

Boris Johnson expressed his concern at the attempt to limit the public’s access to news.

In a statement the campaign group said: “We are experiencing an existential crisis. The climate emergency is the biggest threat to have ever faced humanity.

“But our press barons – who pretend to speak for us, to represent us, to fight for us – have failed again and again to equip us with the facts to help us understand the reality and act accordingly.

“They have done so cynically, failing in their duty to their readership and to the public.”

XR’s protests come five months before the UK holds a crucial climate change meeting called COP26, where nations will be under pressure to increase their commitments to tackle the climate crisis and get to net zero global carbon emissions by 2050.