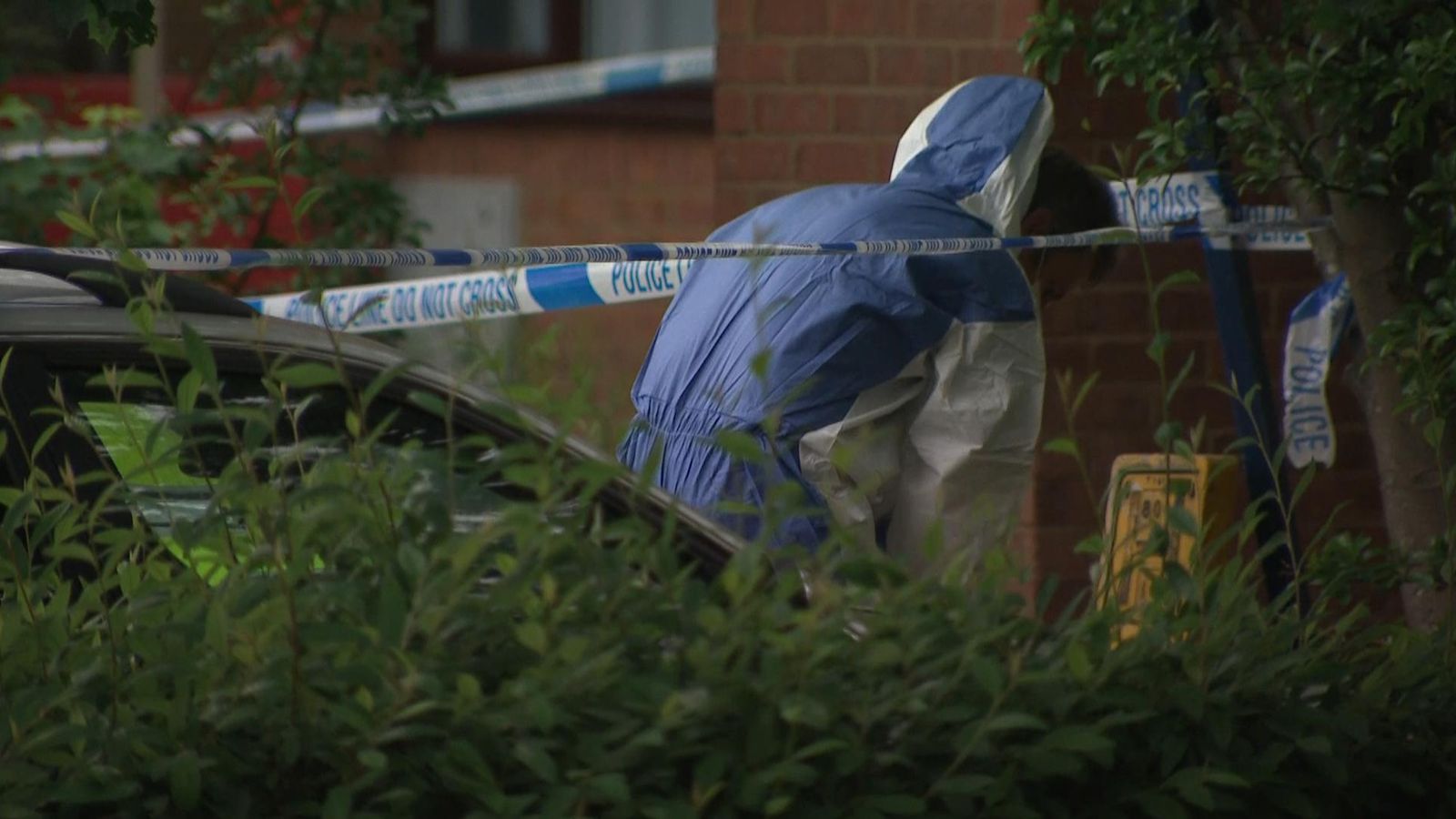 A man has died following a police shooting at a property in Milton Keynes, after another man was found dead and a young child discovered seriously injured.

A witness described how they heard “a loud bang” and then “a man screaming” after officers from Thames Valley Police (TVP) were called to an address in Denmead, Two Mile Ash, at around 9.40am on Saturday.

They forced entry into the property following information from a witness.

Image: Police say cordons are likely to remain for some time

A man in his 30s was found inside and he was later confirmed to be dead, police said.

A child – who the force only described as “young” – was found with serious injuries and taken to hospital.

Officers also found a man in his 20s inside the building. Officers used a Taser before shots were fired at him, and he was pronounced dead at the scene.

In a statement, TVP said: “At this early stage of the investigation, it is understood that officers deployed [a] Taser, before shots were fired at the man.”

A neighbour said his wife was taking out the bins when she saw police breaking down a door.

He said a young child who looked to be fine was carried out by officers, before the injured child was also carried out.

“[My wife] heard a loud bang like a gunshot and a man screaming,” said the man, who did not wish to be named.

Tracey Sherman, 54, said: “I didn’t really know the couple who were living there, I think they’d only moved in a few months ago but I saw them walking their baby in a pram. They seemed nice enough.

“They were only in their 20s I think and the baby may be about one year old. It’s so tragic.”

Another neighbour said: “The family had only been here a few months, maybe six, but they just seemed like a normal couple.”

The man’s next of kin have been told about what happened, and officers say cordons are likely to remain outside the property for a number of days.

The incident has been referred to the Independent Office for Police Conduct (IOPC).

In a statement, the IOPC said its investigation was “at a very early stage and no further information can be provided at this time”.

Image: A child was taken to hospital with injuries after being removed from the property

TVP assistant chief constable Christian Bunt said: “What has happened can only be described as absolutely tragic and will no doubt have an impact on the community.

“Our thoughts are with those who have been impacted by this incident.

“At this stage no one else is being sought in relation to this investigation and we are seeking to support everyone involved.

“Members of the community will see an increased police presence. We would ask anyone who has any concerns or information to please speak to one of our uniformed officers.”