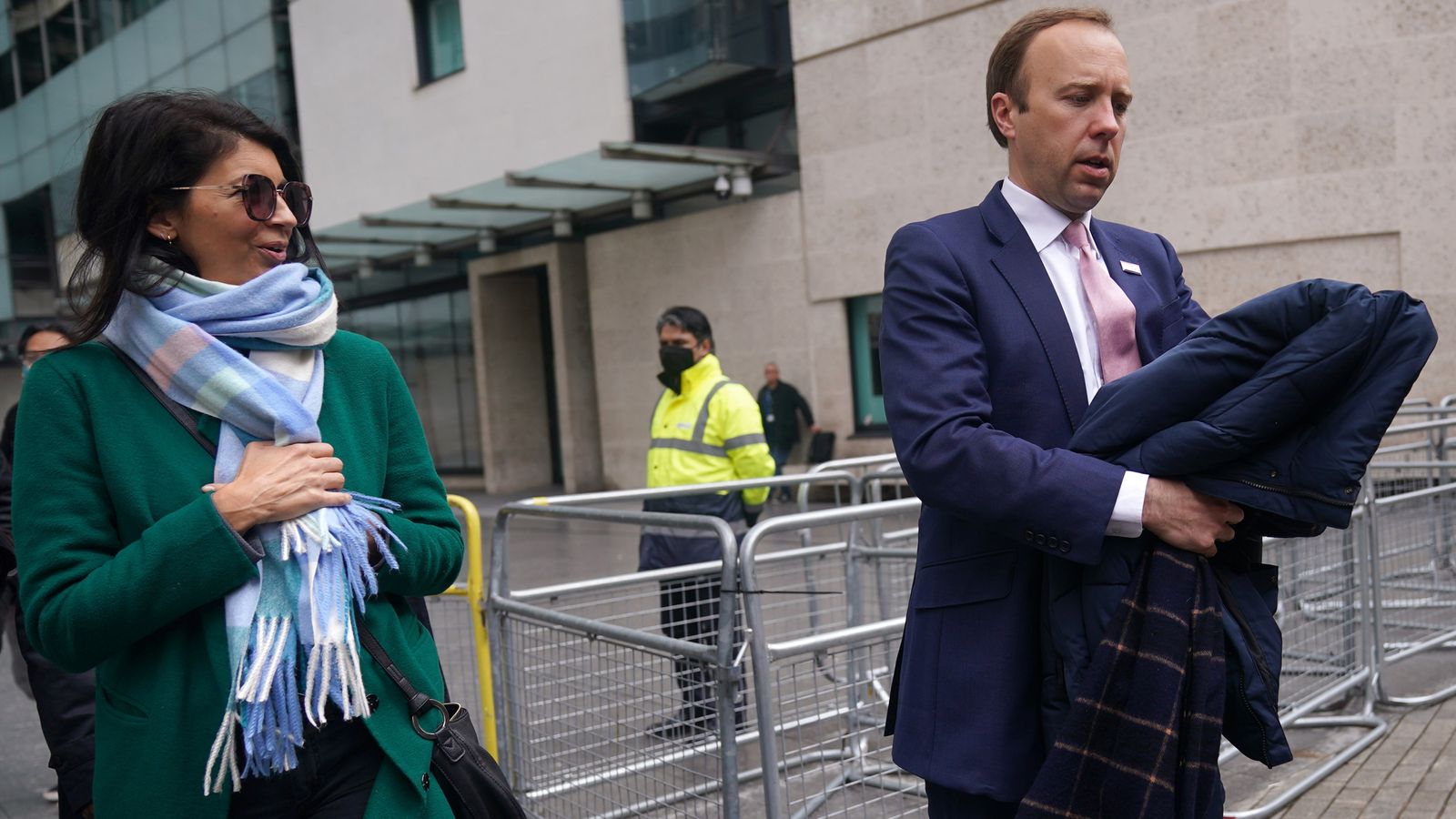 Sky News presenter Trevor Phillips has challenged a Tory minister over the government’s “one rule for us” mentality, saying people were not allowed to attend his daughter’s funeral because of COVID restrictions.

Phillips, who presents the channel’s Sunday political show, revealed how hundreds of family and friends were unable to be at the graveside for the burial last month due to the coronavirus rules that Mr Hancock himself broke.

Mr Phillips spoke of his own personal loss and the impact of the lockdown curbs after Mr Hancock sought to cling to office despite footageshowing him in a passionate embrace with married aide Gina Coladangelo,which was days before Phillips held the outdoor funeral of no more than 30.

Image: Matt Hancock and Gina Coladangelo, pictured in May

On Friday, the day the images were published in The Sun, Boris Johnson stuck by Mr Hancock and Downing Street said the prime minister considered the matter closed after he issued an apology and said he wanted to focus on the pandemic.

However, in the face of a public backlash and calls by Tory MPs for him to go, Mr Hancock eventually bowed to pressure and resigned on Saturday evening.

Tackled by Phillips over the length of time it took for Mr Hancock to quit, Northern Ireland Secretary Brandon Lewis said the focus had been on tackling the pandemic, but the controversy over his position had become “distracting”.

He added that Mr Hancock took the time to reflect and decided his position was untenable, and “in doing that, he’s put his family and indeed all of us in the UK first” so the PM can focus on the pandemic.

But pressing him, Mr Phillips said that “snogging videos from the guy who tells you, you can’t hug your gran” gave the appearance of “one rule for us and one for them”.

‘Those who make these rules have to stick by them’

He added: “I wouldn’t normally do something like this but I want to put a private, a personal question I guess in a way, to you.

“Over the past two days every cabinet minister, including you, has come out to essentially defend the prime minister and Matt Hancock.

“The pictures that we saw were of an encounter on 6 May; on 11 May my family buried my daughter who died not of COVID, but during the lockdown.

“Three hundred of our family and friends turned up online but most of them were not allowed to be at the graveside, even though it was in the open air, because of the rule of 30, because of the instruction by Mr Hancock.

“Now the next time one of you tells me what to do in my private life, explain to me why I shouldn’t just tell you where to get off?”

‘Matt Hancock was in two bubbles’

Responding, Mr Lewis said: “Well, I absolutely accept and understand the frustration and even the anger that people have, having been through the situations they’ve been through.

“As you say, Trevor, people across the country – I’ve lost friends and there were funerals I’ve not been able to go to over the last period and that is such a tragic situation for any of us to be in.

“As I say, that is why it is so important that all of us do what we can to keep ourselves, our families, our friends, our wider community safe.

“…What Matt did was wrong, he acknowledged that, it’s why he apologised immediately for his behaviour and acknowledged what he did was wrong and it is ultimately why he has taken the decision that his position was untenable and distracting from the wider work that we’ve all got to do to move forward in the pandemic and out of the pandemic. “

She told Phillips: “It feels to me that the prime minister has a very dangerous blind spot when it comes to issues of integrity and conduct in public life and that’s a really big problem and it’s an even bigger problem when you’re in the middle of a pandemic and you’re asking the public to also have integrity and conduct in the way that they go about with their own lives.”

Labour leader Sir Keir Starmer said the prime minister had acted “too slow” and should have fired Mr Hancock.

He said: “Matt Hancock was right to resign because he broke the rules – he had to go. But the prime minister should have sacked him. Yet again, Boris Johnson was too slow, too weak and didn’t show the leadership that was needed.”

‘Ending pandemic is my priority’

Sir Keir added there are “huge questions still to answer” in the aftermath of Mr Hancock quitting.

He said: “If anybody thinks that the resignation of Matt Hancock is the end of the issue, I think they’re wrong and I think the incoming health secretary (Sajid Javid) and the prime minister now have serious questions to answer about the CCTV, about the access, the passes, the contracts, etc.”

An investigation into how footage from Mr Hancock’s office came to be recorded and leaked is due to take place.

The Department of Health and Social Care (DHSC) will be looking into how the former health secretary came to be videoed kissing one of his aides, Gina Coladangelo.