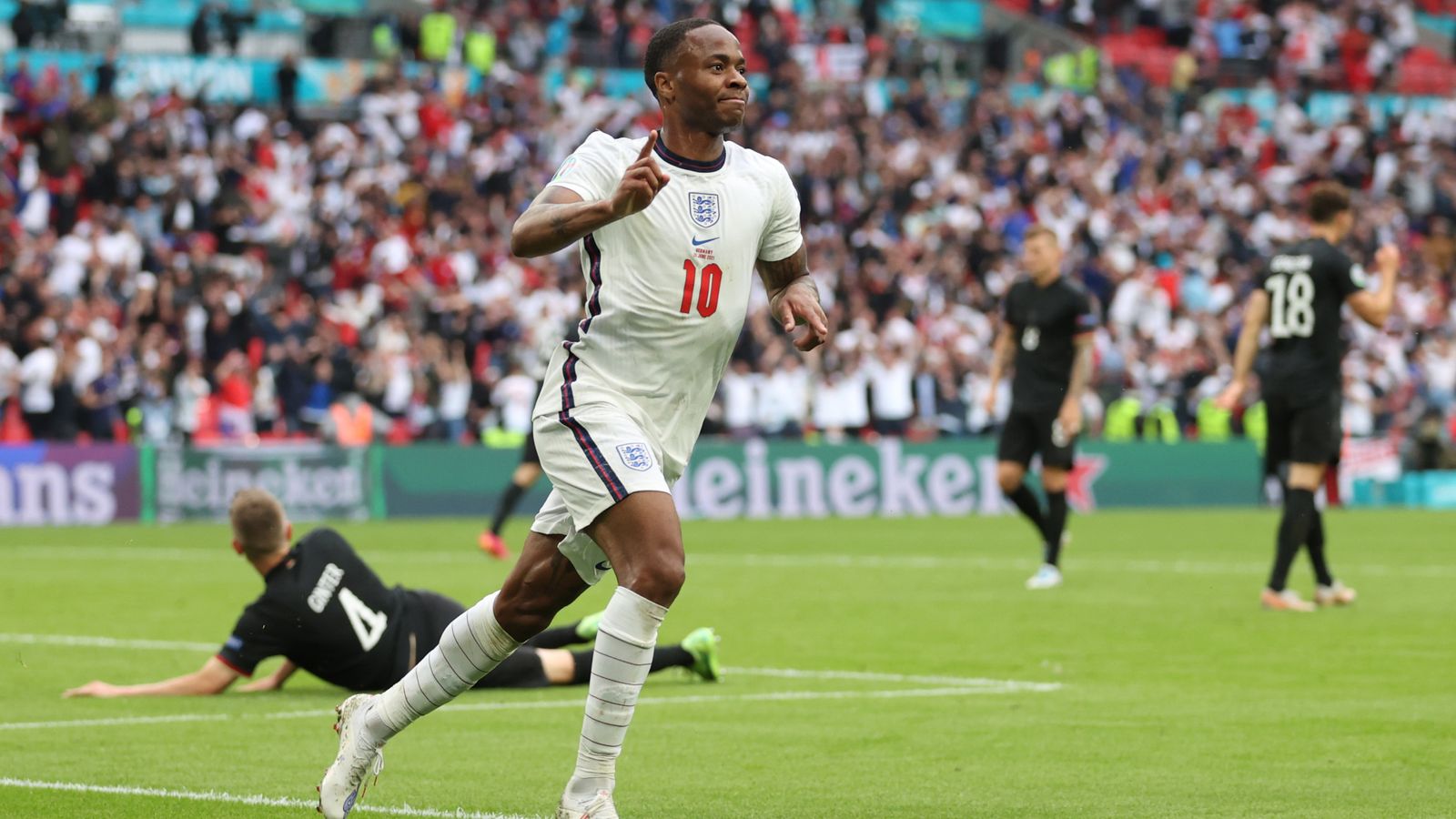 England have beaten Germany 2-0 at Wembley to book their place in the quarter-finals of Euro 2020.

Second-half goals from Raheem Sterling and skipper Harry Kane were enough to see Gareth Southgate’s men progress to the last eight – where they will face Ukraine.

It was not all plain sailing for the home side – but fans could have been forgiven for thinking it was their night when Thomas Muller missed a golden opportunity to equalise on 81 minutes.

Image: Thomas Muller holds his head in his hands after missing a golden chance to equalise

The Germany veteran – who scored twice against England in their 2010 World Cup exit – was put through on goal and inexplicably dragged wide.

Five minutes later Kane stepped up to nod home from close range to seal the win.

The captain said of the result: “An amazing day – an amazing game.

“To hear Wembley like this was just a moment none of us will forget.

“It was an amazing performance, two-nil, another clean sheet… just the perfect afternoon.”

Asked about his first goal of the tournament, he added: “Massive. As a striker you’ve just got to be ready for the next chance.

“Jack’s (Grealish) put in a great cross and I was able to put it in.”

Following the final whistle, Sterling said: “We needed to put in a performance against a very good side and I thought we did that today.

“Scoring for your country is always special – so this is a very special moment for me.

“It was an all-round great team performance.”

Victory was all the sweeter for manager Gareth Southgate, who missed a crucial penalty in the Euro 96 semi-final shootout against the same opponents.

And he was delighted with the result.

“It was a brilliant afternoon,” said the boss.

“The players were immense right the way through the team and the fans were as well.

“Only 40,000 but it was as good an atmosphere as I can remember in Wembley. We played extremely well and deserved the win.

“But I’ve had to say to them – I’m the party pooper because if we don’t go and capitalise on that on Saturday then it doesn’t count for anything.”

In the crowd to enjoy the victory were the Duke and Duchess of Cambridge and their seven-year-old son Prince George.

It was only England’s second ever European Championship knockout game win, five years on from the 2-1 humbling at the last-16 stage by minnows Iceland.

It has been suggested, with the likes of France, the Netherlands, and reigning European champions Portugal already eliminated, this is England’s best chance of a major tournament success since 1966.

Image: The Duke and Duchess of Cambridge watch the game with Prince George

Before Tuesday evening, Germany had been a thorn in England’s side.