COVID-19: Double jabs will be ‘a liberator’ in enabling people to travel quarantine-free, says PM 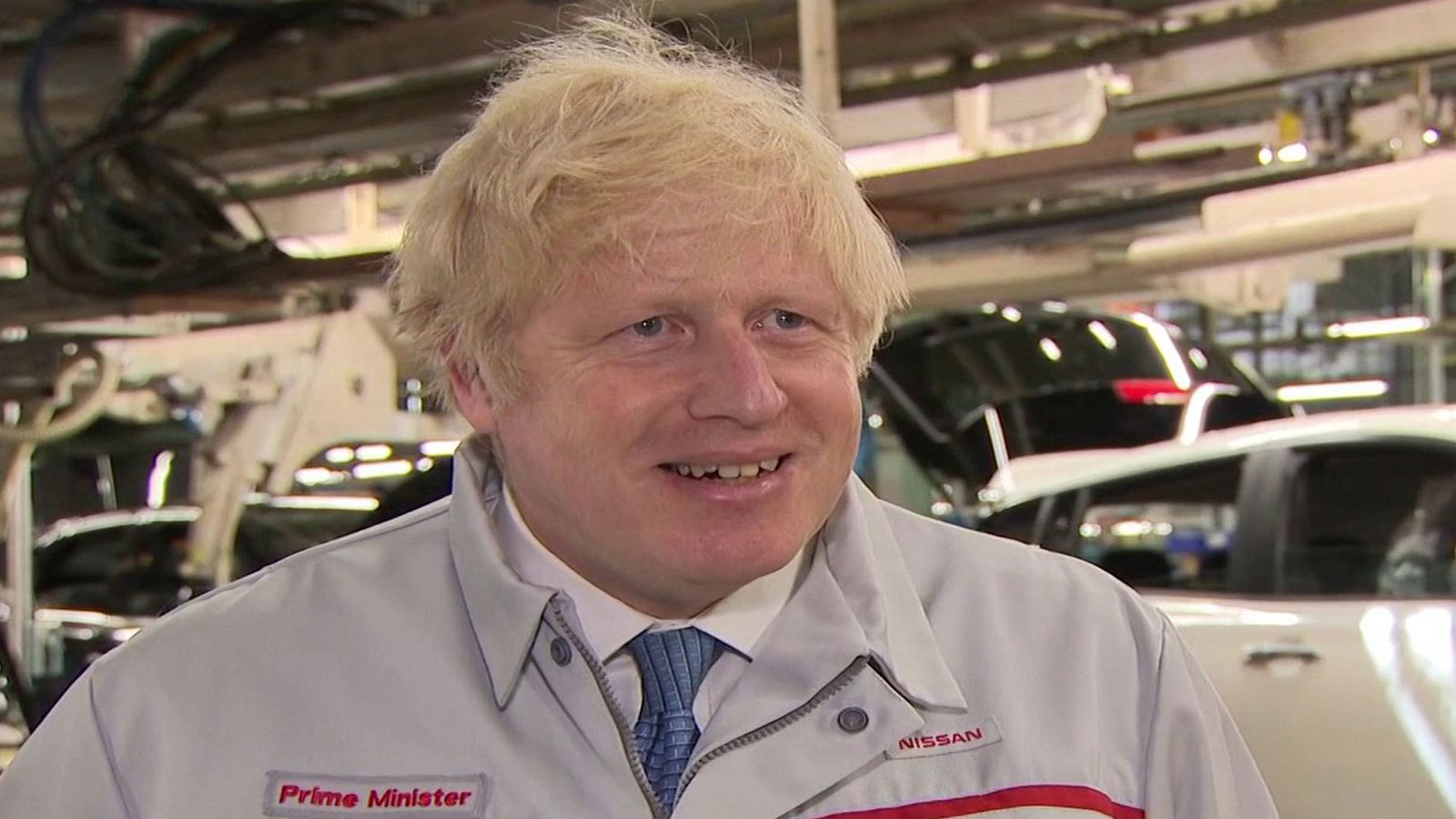 Double jabs will be “a liberator” for people wanting to travel abroad this summer, Boris Johnson has said – as he warned “extra precautions” may be necessary to protect against COVID after 19 July.

The prime minister said details of the government’s plans for both allowing those who have received two vaccine doses to visit amber list countries without having to quarantine on their return and lockdown easing later this month will be revealed in the “next few days”.

The PM would not confirm a date on which such a policy for those who have had both COVID vaccinations would come in to force, but said he was “very confident” that it would “enable people to travel”.

Image: Boris Johnson says double jabs will be ‘a liberator’ for those wanting to travel abroad

He did, however, warn that going abroad would not be “completely hassle free” this summer.

During a visit to a Nissan plant in Sunderland, the prime minister told reporters: “I am very confident that the double jabs will be a liberator and they will enable people to travel.

“But there is no doubt at all that once you have got the two jabs you are in a much better position.”

He added: “But I want to repeat the point that I have made before, I hope people will forgive me if I say that obviously I want travel to be possible, but I’ve got to stress that this year will not be like every other year because of the difficulties with COVID.

“People shouldn’t expect that it will be completely hassle free.”

Live COVID updates from the UK and around the world here

The government’s amber travel list currently covers many of the most popular UK holiday destinations such as Spain, France, Italy, Portugal and Greece.

Image: The PM warned people that they should not expect to be able to travel this summer ‘hassle free’

Transport Secretary Grant Shapps has previously said people “should not be travelling to these places right now”, but that this is likely to be updated “later this summer”.

Those who go against that guidance must take two post-arrival tests from private companies on day two and day eight after arriving.

They are also required to self-isolate at home for 10 days, although they can reduce that time if they take an additional negative test on day five.

UK travellers arriving in Portugal will have to prove they have had two doses of a vaccine at least two weeks ago, or they have to isolate for 14 days.

UK tourists are allowed into mainland Spain without a negative PCR test, despite the country remaining on Britain’s amber list.

With the UK experiencing a third wave of Covid cases, Spain, Malta and Portugal have tightened up travel restrictions.

Germany is also on the amber list but, due to the Delta variant, travellers from the UK will only be admitted if they are citizens or residents – or have urgent humanitarian reasons such as an immediate family bereavement.

However, they must quarantine for two weeks, even if they test negative.

When the new exemption for those who have had two COVID jabs comes into force, the guidance that people should only travel to amber list countries for “essential” reasons will also be dropped, the Department for Transport has previously said.

It means that at that point, anyone will be able to travel to countries in the amber category no matter the reason for their trip.

Those nations, however, may set their own conditions on arrivals.

Even when those double-jabbed are exempt from quarantine when visiting amber list countries, they will still be required to take a pre-departure test on day two, the department has said.

The PM’s comments come as newspaper reports suggested a policy allowing those who have had two vaccine doses to travel to amber list countries without having to quarantine could be introduced on 26 July – in time for the school summer holidays.

The PM refused to be drawn on any particular date.

Meanwhile, looking ahead to planned easing of the remaining COVID restrictions on 19 July, the PM said “there may be some things we have to do” beyond that date.

Spain’s Balearic islands and Madeira, an autonomous region of Portugal, are on the UK government green list.

“I will be setting in the course of the next few days what step four will look like exactly,” he said.

“But I think I’ve said it before, we’ll be wanting to go back to a world that is as close to the status quo, ante-COVID, as possible. Try to get back to life as close to it was before COVID.

“But there may be some things we have to do, extra precautions that we have to take, but I’ll be setting them out.”

The prime minister’s comments on the so-called “terminus” date will anger some on the Conservative backbenches who expect to see all restrictions removed after 19 July.

Tory MP Steve Baker, vice chair of the Covid Recovery Group, has urged ministers to drop all guidance on the use of face masks and social distancing along with the legal restrictions.

In an interview with Sky’s deputy political editor Sam Coates earlier this week Mr. Baker accused the government of rowing back on commitments made by the former health secretary Matt Hancock.

“The impression which Matt [Hancock] was happy to create in the Commons was that once we got to step four there would not be regulations – freedom from regulations – now that’s difficult to reconcile with what’s now going on with events with COVID certification being trialled, with social distancing and test and trace – what actually is the world going to look like when we get our freedom back?”, Mr Baker said.